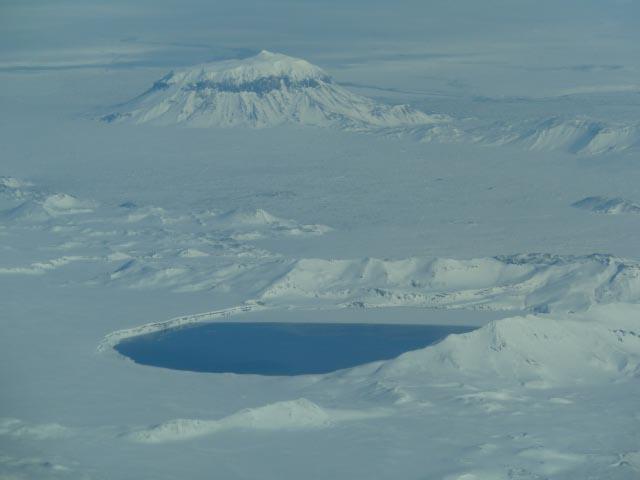 As most of you know I started to say that Askja is heading towards an eruption a couple of years ago. The reason back then was the persistant seismic activity in the Dreki area and the Herdubreid area. Later Hazel Rhymer published a paper with information about an inflation taking place within the caldera, and towards the Herdubreid volcano.

After that we have seen continuation of seismic activity and continued uplift together with harmonic tremor episodes.

Now it seems like the Öskjuvatn Caldera Lake is ice free, something that last happened before the 1961 eruption. During a fly-over with thermal imaging cameras no heat spots where found on the surface which indicates a possible deeper source. There is a slight possibility this might have been due to warm south-easterly winds, but we are talking about a lake that normally is iced over into late May, and that has residual ice in July. 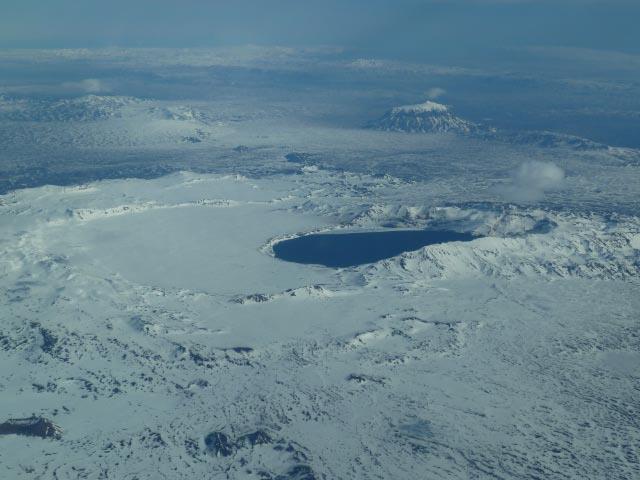 Photograph by Hreinn Skagfjörð Pálsson. Öskjuvatn on the 27th of March. The lake is here totally ice free.

It is not a far stretch of the mind to imagine that this is due to a hydrothermal upwelling from the newly emplaced magma under the center of the caldera. The energy needed to warm the lake, if that is what is happening, would be rather large since this lake is more than 200 meters deep.

According to Björn Oddson at the Icelandic Volcanological Institute there is no evidence of an imminent eruption going to take place. He also states that to be sure if it is the southern warm winds or a geothermal event, measurements taken directly in the lake is needed. If it is a geothermal event the chemistry of the lake would have been altered.

We can scrap the idea of warm southerly winds as the cause for the melted ice. Why? Well, all other lakes of the highland/inland are still covered in ice. Even those that are considerable lower and closer to the sea. I never really believed that the warm wind would be the reason, but it is always good to have another explanation at hand.

I would also like to point out that Öskjuvatn is not a layered lake. There are two versions of layered lakes, one is of the Lake Nyos type where gas at depth works as a layering agent, Öskjuvatn is not deep enough for that to happen. The other version are thermoclinate layered lakes. This cannot happen at Öskjuvatn since heat is induced from below, and the heat rises uniformly through the body. Thermally layered lakes operate the other way around with a colder bottom than the top, which creates a sharp thermoclinate boundary. At Öskjuvatn the temperature drops uniformly as it closes the cold surface water. Just an heads up to avoid theories that are running oposite to the laws of thermodynamics.

Okay, there is third version of layered water bodies, but Öskjuvatn is not a salty lake… So there are no thermohalines.

This webcam shows the relatively nearby Halslon lake.

According to IMO the lake was yesterday completely ice free and there was no ice floating in it. All 3 geothermal fields in the area was highly active. No point source heat was detected in the caldera.

IMO have decided to raise the level of monitoring to be able to closely follow the situation. 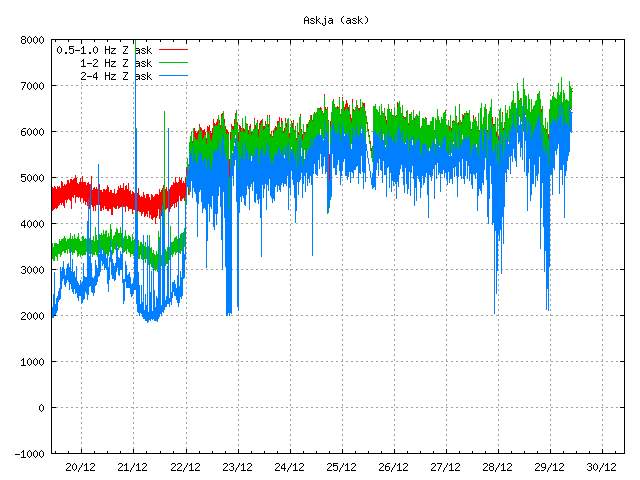 Image by IMO. Loud tremor event in Askja. Probably onset of the warming of the lake.

As many of you know a hydrothermal event is rather noisy. At around the strike of twelve o’clock at night between the 21st and 22nd of December 2011 a large tremor surge started at Askja, an event that lasted for many days. On this image it is running well into the 29th of December. This is the likely start of the event that has warmed the lake.

Thanks to Inge B who had archived the event and sent me the image.

Our reader Wagabond has confirmed that the Askja SIL at the time it was showing the activity above had fallen down to the ground in hard wind. There went that nice theory about when the heating of the lake started. It is good to be wrong, best way to learn new things.

The Icelandic Police have closed down all roads leading towards the Askja area due to fear of poisonous gases being released by the volcano. Also they fear that other run-up features might potentially be harmfull. On Tuesday after the Eastern the IMO will go to the area for a check up.