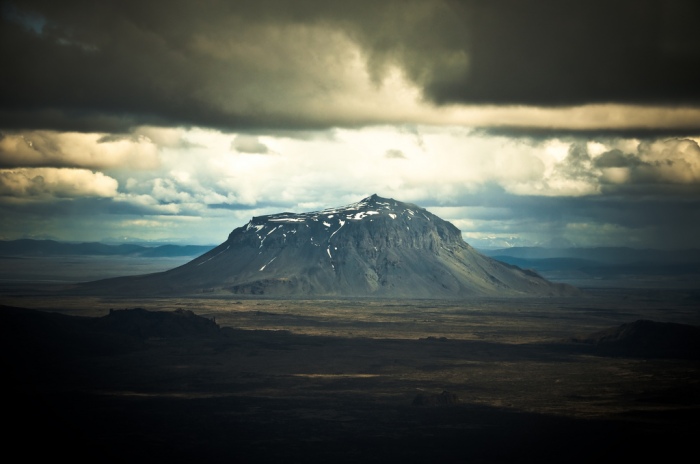 Photograph by Zanthia. On the picture one can see Mount Herðubreið. Herðubreið (Broad Sholder) is a tabletop mountain, or in another word, a Thuya. 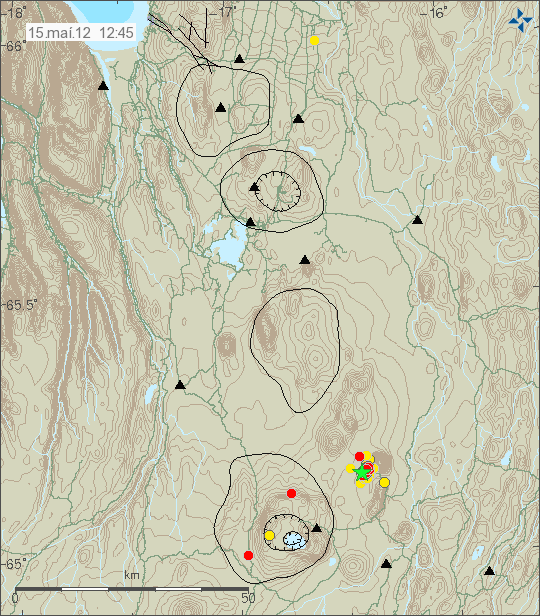 Image by Icelandic Met Office (IMO). Askja to the left of the green star, the black “circle” above is Frémrinamúr. Kverkfjöll is due south and not showing here.

Only problem here is the 3 earthquakes that happened within Dyngjufjöll (Askja). Having 3 earthquakes above 2M at the same time as a medium sized earthquake swarm takes place rather beggers coincidence. I think when the hubbub of this is over the area will be removed from Kverkfjölls fissure swarm. One should also remember that Kverkfjöll is the smallest volcano on the riftline.

Image by Icelandic Met Office (IMO). There seems to be magmatic components to the earthquake swarm when looking at a higher resolution.

On the other hand, this is as far as known not anywhere near any part of Askjas fissure system. We should remember that. Personally I thought up untill now that Herðubreið itself belonged to the Frémrinamúr volcanic fissure swarm. Apparantly I was as wrong about that as the ones who thought it belonged to Kverkfjöll.

So, now we are back to a long dormant volcano that had it’s last eruption before deglaciation. And that put it as having erupted at 6000BC latest (time when the glacier withdrew). How do we know that? Thuyas only form under glaciers that are big enough to contain the erupted lava thusly forming the tell-tale tabletop look of a thuya. So, we are talking about a long dormant volcano here.

Image by University of Iceland and Professor Sigrún Hréinsdottir. Inflation showing at Askja. The inflation at Herðubreið started 2 years before.

If we look at the 12 +2M earthquakes we find that 9 of those are between 2.2 and 7.9 kilometres deep. 2 of them are 1.1km deep, and that is a dummy value when an actuall depth has not been set, then we have the original 3.4M quake that has a suspiciously undeep figure. The current given depth is almost certainly around 5 to 7km and will be revised sooner or later. What does this then tell us? That the figures point towards a magmatic intrusion into an old chamber. Remember, this is my interpretation.

So, back to Herðubreið. What is Herðubreið? In my eyes Herðubreið is starting to look like a volcano on it’s own. One of the reasons is that it started to inflate just to the east before Askja started to inflate. It in fact started inflating and having earthquake swarms to the east before Askja stoped deflating. So, I am actually contemplating that Herðubreið and Askja had a common origin and has been rifted apart by the EISZ part of the MAR over the course of millenia. What I am trying to say is that they might actually share a deep root found in the current EISZ. We could think of them as two non-twins sharing the same womb and umbilical cord.

Untill we have new data from the area this is a bit speculative, but I do not think it is that much way off.