In the first two instalments, we had a look at Katla as she appears through media and what she has done historically. It is now time to have a look at what’s going on and try to paint a coherent picture of what she actually is, is up to and able to do, but first let us recapitulate what we found previously:

The greatest danger from Katla comes from the very quick and extensive melting of the glacier caused by large eruptions which results in destructive jökulhlaups. There are three major outlets from the glacier: Entujökull to the NW that empties into the Markarfljot river and valley north of Eyjafjallajökull, Sólheimajökull to the SSW that empties onto the Sólheimasandur and finally, Kötlujökull to the SE that empties in a great arc east through south onto the Mýrdalssandur. What ought to be prime farmland and in fact once was settled, is nowadays an unsettled wasteland because of the devastating jökulhlaups unleashed by Katla. This is the true reason why Katla is considered to be such a dangerous volcano.

The fact that one often comes across the reference that in the days before the Hringvegur (ring road), “people were afraid to traverse the Sólheima- and Mýrdalssandur because of the frequent jökulhlaups” is another indication that smaller and unrecorded eruptions that cause only minor hlaups are far more frequent than the 40 – 80 years often given as the interval between main, and thus visible, eruptions.

Fig. 2. The foundations of the old bridge across the Múlakvísl river destroyed by the July 9th 2011 jökulhlaup
are visible to the left. The new bridge was laid down a week later. (photo John A Stevenson, GVP website)

Apart from the postulated connection between the Eyjafjallajökull and Katla volcanoes, one question that always crops up is the Goðabunga cryptodome. Many volcanologists maintain that it is a part of the volcanic system of the Katla central volcano. Others, notably Sturkell and his co-workers, claim it is part of the Eyjafjallajökull volcanic system. In order to shed some light on this issue, I asked our own GeoLurking if he could make a plot of all the earthquakes from 1994 up to and including the 2010 Eyjafjallajökull eruption. The results are quite clear and do throw up a surprise:

Fig 3. E-W cross section, view from south, through Eyjafjallajökull, Goðabunga and Katla. Plot by and
courtesy of GeoLurking. The “lines” formed at approximately 5, 3 and 1.1 km at Goðabunga and Katla are most
likely artefacts caused by quakes being assigned a poorly defined depth. The latter, 1.1 km, is the default depth
assigned by the automatic system in case it cannot compute a depth within the predetermined level of certainty and unless they are manually checked, which is not the case of every quake, automatic depth remains uncorrected, hence these artefacts.

From this cross section, it is quite clear that there is no connection between the Eyjafjallajökull volcanic system and Katla. Eyjafjallajökull has its own, well-defined feeder system from the Moho (first molten layer beneath the Earth’s solid crust) as does Katla, thus they are wholly independent of one another. As can also be seen, albeit not as clearly, Goðabunga too seems to be independent of either Eyjafjallajökull and Katla, the ramifications of which will be the subject of a later post by Carl. Sufficient to say that when we contemplate what Katla herself may be up to, we must differentiate between activity at Goðabunga and activity at Katla. Once we do, we see that while Goðabunga is more or less continuously active, Katla operates in bursts and seems to be most active during summer and autumn when the ice cap is at its, relatively speaking of an up to 700 m thick glacier, thinnest. 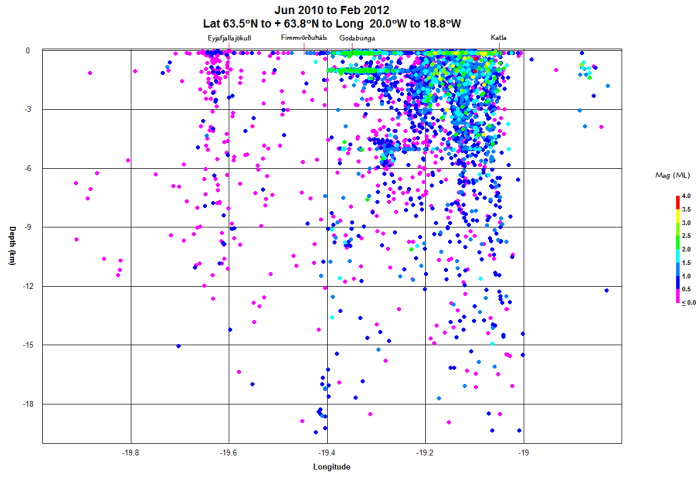 Fig 4. Activity post-Eyjafjallajökull. Activity at Eyjafjallajökull is minor and has to do with the system settling down after the end of the eruptive phase. Note that at a depth of 0 to 5 km or so, there seem to be three separate areas of activity at Katla. (Plot by and courtesy of GeoLurking.)

After the Eyjafjallajökull eruption, Katla seems to have entered an active phase with a suspected subglacial eruption on July 9th 2011 and several pits or craters forming on top of the glacier. This activity seems to be localised to three main areas within the caldera:

Fig. 5. Earthquake activity at Katla July 9th 2011, the day of the jökulhlaup and suspected subglacial eruption. Both the 1823 and 1918 eruptions occurred close to but just east of this area. The 1823 eruption occurred close to the easternmost red spot while the 1918 eruption was roughly at the rightmost dark blue spot below it. (IMO) 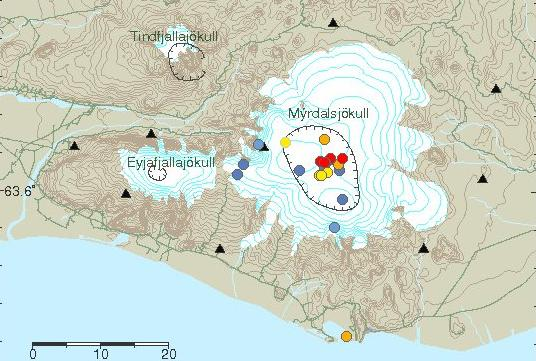 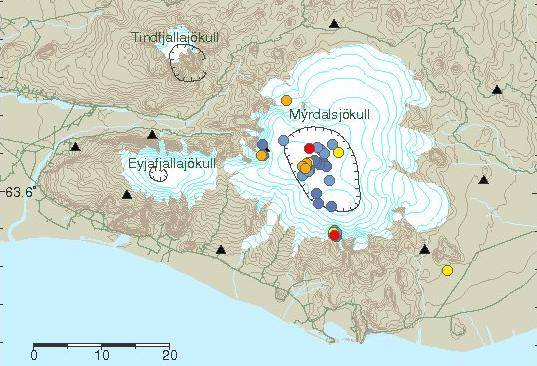 Fig. 7. Earthquake activity at Katla July 21st 2011. The 1755 eruption was situated in the same area as the three overlapping orange spots. (IMO)

As can be seen, there are at least three distinct areas of activity inside the caldera with the one associated with the inferred July 9th eruption well to the south. The pits formed in the glacier also align with these three areas, albeit the pits to the northeast seem more drawn out along the caldera wall and not over the center of activity. These three areas seem to tie in with the three areas of activity noted in fig 4 as do the locations of three of Katla’s major eruptions. Thus there is not a single vent, but at least three at surface distances of approximately 5 to 8 km from each other. It is equally likely to judge from Fig 3. and Fig 4. in conjunction, that at great depth, they do have a common source.

I will now present you with my personal view of Katla, but do not be afraid to disagree or draw your own conclusions (within reason please, no Katlatubos here):

Katla is a young volcano and far more active than has previously been thought. Unlike the similarly aged but much less active Eyjafjallajökull, Katla has had more time to develop her system of sills to the point where they are fewer in number than they originally were but have a substantially larger magma-carrying capacity and approach or may have reached the point where they can be considered magma chambers proper. Since cooking evolved magmas takes a long time, usually millennia in the case of cubic kilometre-sized silica-rich magmas and at the very least many centuries for intermediate magmas, it is highly likely that Katla possesses several pockets of magma capable of eruptions ranging from high VEI 3s to small VEI 5s. Not only do the times between such eruptions argue this, their wide spread of location within the caldera does so too.

The most common type of eruption at Katla is the small, subglacial eruption of a few tens of millions of cubic meters of basaltic magmas. These eruptions are not energetic enough to break through the very thick Mýrdalsjökull glacier and the only proofs of their existence are intense earthquake swarms followed by minor jökulhlaups and later observations of deep pits or craters, sometimes water-filled, in the glacier ice. My guesstimate is that there may be many such small eruptions over any given ten-year period, and possibly in the case of a period of high activity, there may even be more than one in a single year. By back-tracking and investigating old accounts over the past few centuries of jökulhlaups in the area not associated with visible eruptions, it ought to be possible to identify many of these minor eruptions.

While a larger “proper” eruption of Katla in the VEI 3 – 5 range cannot be ruled out, I find one unlikely at present as the current activity mostly is in areas already depleted of evolved magmas by geologically speaking very recent major eruptions. Also there is little sign of the uplift required on GPS. If one were to occur, the odds for one towards the upper end of what Katla is able of ought to be better in the Eastern to Northern parts of the caldera.

Finally, what we do see when we look at SIL-stations such as Austmannsbunga, located on the NE caldera rim (not a coincidence, see above), is hydrothermal activity following a period of possibly still ongoing magmatic intrusion and not signs of an imminent, large eruption.

Fig 8. Hydrothermal activity at Katla as shown on the Austmannsbunga SIL (IMO)

I’m sorry to be such a boring old fart, but if this is unsatisfactory, start looking for intense earthquake activity at some 25 – 10 km depth, showing on the IMO map for Mýrdalsjökull as being in the Eastern to Northern part of the caldera, activity that shows a clear upwards trend and spreads when it reaches depths approaching 5 km!