(Sorry, I don’t have credit for this picture… found it via Google though…looks like an old postcard)

Whether you are new to volcanology (like me) or an old hand; if you have been following the BoB happening, you will hopefully be familiar with the work of Juan Carlos Carracedo. A brief biography may be found here: http://www.cienciasmc.es/web/biografias/juancarlos_carracedo.html

He is, pretty much, the foremost authority on the volcanology/geology of the Canaries, and he has (apparently) had a proper row with Nemisio Perez about BoB!!!

What follows is essentially a digest of some of Carracedo’s work; anything in bold is wild amateur schpeculation on my part.

Before we go into the Canaries themselves, a few points about the Hawaiian Islands, which may be considered the archetypal intra-plate, hotschpot driven, volcanoscheanic island chain (iphsdvoic)…They are located approx 2000 miles from the coast of North America and are resting on thin, fast moving Pacific Ocean crust. The Big Island is ongoingly active; the last confirmed eruption on another island was Halekala on Maui (approx 50kms from Big Island) which occurred sometime between 1480-1600. Kauai (580kms from the Big Island) is long since extinct and eroded/ subsided to a nub. The Hawaiian archipelago shows an orderly progression from youngest and most active volcano to oldest and most extinct.

The Canaries are approx 100kms (at their closest) from the African continental crust and are resting on thick but slow moving Atlantic Ocean crust. (Hotspot volcanism does not occur if the crust is too thick and/or moves too fast.) Forming a near perfect curve, they emerged in sequence starting with Fuerteventura which went sub-aerial approx 25 million years ago, then Lanzarote, Gran Canaria, La Gomera and Tenerife (approx 7.5 million years ago). La Palma and El Hierro are the youngest of the islands; they surfaced between 1.2 and 2 million years ago. The hotspot is somewhere between La Palma and El Hierro and the African plate is moving northeast and rotating “anticlockwise”. Incidentally the Canaries show little or no subsidence; the lower (older) islands are that way due to erosion alone. So far, so normal for an iphsdvoic…

Delving deeper and comparing with the Hawaiian iphsdvoic shows that the Canaries actually have an entirely different pattern of active volcanism:

Look again at the sequence in which the Canaries were formed; Fuerteventura before Lanzarote, La Gomera before Tenerife…

Also note in the map above; Salvagens seamount is way off the postulated hotspot track as is Lars, as indeed are Gran Canaria, Fuerteventura and Lanzarote…

El Hierro and La Palma formed (and are forming) “simultaneously”; despite being as far apart as Tenerife and Gran Canaria…

La Palma has had lots of historic activity (as may be expected), but so has Lanzarote (400 kms from the hotspot); there was a devastating eruption (though with few, if any fatalities) from 1730 to 1736 and a minor one as recently as 1824. …

El Hierro, apart from BoB has had no confirmed historic eruptions; there was a seismic crisis in 1793 but it is not known if there was an associated (presumably undersea) eruption. The most recent (proven) eruption was in approx 500BC. 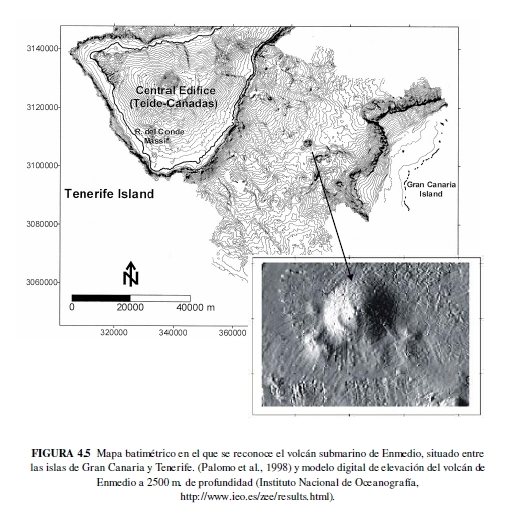 (Credit as in picture)

So why don’t the Canaries show an orderly progression like the Hawaiian Islands? Carracedo asserts that edge driven convection is the reason. 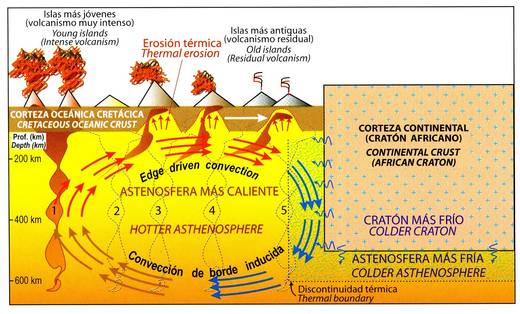 The hotspot warms and “circulates” the nearby athenosphere. This warming and circulating doesn’t amount to much (it gradually cools and sinks) except where the circulation goes east; and runs into the African continental crust (approx 500kms from the hotspot). When it hits the cold crust it cools and sinks; this in turn pushes more of the athenosphere up and past the plume “driving” the convection.

Hopefully we can see how edge driven convection could explain some of the “anomalies” in the mantle plume model of the formation of the Canary Islands. Specifically; the historic eruptions at sites far removed from the hotspot.

So what could account for the geologically simultaneous formation of El Hierro and La Palma and the seemingly “off track” formation of Salvagens, Lars, Gran Canaria, Fuerteventura and Lanzarote? Carracedo says that this may simply be a function of the thick, slow moving plate. He has a further theory as to why La Palma and El Hierro are evolving simultaneously, albeit with apparently alternating eruptive periods. He suggests that changes in the tectonic stress regimes caused by large gravitational landslides are the explanation. I haven’t found a paper which goes into this, but a short discussion can be found at the end of the Giant Quaternary paper and in the book referenced below.

Carracedo also discusses the idea that edge driven convection is more “chaotic” than the diagram implies i.e. it’s not just a simple “loop”; slow moving as it is, there may be some turbulence in the system.

This got me thinking about possible causes of turbulence:

Eruptions have diverted energy from the system, as have the conduits and chambers under the islands.

There are an (increasing?) number of islands resting on the oceanic crust; which distorts it.

The African continental crust is not a perfect rectangular slab.

The hotspot is not a perfect “tube”.

The convective currents themselves (given the above) presumably interact.

The chaos in the system could therefore be “perturbing” the mantle plume itself… Eruptive action has moved from the southern tip of La Palma (possibly via Malcolm Enmedio) to just south of El Hierro (which is about 100kms) in only 40 years. This wild theory of mine may also go some way towards explaining the “anomalies” in the hotspot model of the Canary Islands discussed above.

The Canary Islands and their volcanoes are complex and enigmatic, they’re not in Iceland’s league, but for an iphsdvoic they have a certain, as yet unresolved mystery about them…

I’m hoping that this post will raise as many questions as it answers and provoke as many arguments as it settles and that those questions and arguments will get answered, debated and settled (and so on and so forth!)…Thanks for reading.

P.S. Big thanks to Lizzie for all her help x.

Growth, structure, instability and collapse of Canarian volcanoes and comparisons with Hawaiian volcanoes:

http://www.ign.es/ign/layoutIn/volcaFormularioCatalogo.do is the source of EQ data.

104 thoughts on “Edge Driven Convection: BoB’s Back-Story And Malcolm in The Middle.”