Photograph by Cestomano. The lighthouse of the Orchillas was once known as the end of the world. Under this lighthouse is where the new magma chamber is forming.

This will mainly be a short update. Not much new has happened during the last few days, I will just try to explain why.

What we are seeing now is the formation of a new part of the magma chamber(s) under the island of El Hierro. The progression of earthquakes that we have seen moving roughly from Tanganasoga volcano towards the WSW is magma following a weak seam between two rock layers in the crust. This is creating a rather low, but wide, layer filled with magma. You can think of it as a cake, where the magma is a layer of custard cream between two pieces of bread.

Initially I thought that this layer would not be able to take a lot of magma before the magma would break through into the two older layered magma chambers that were created before the last eruption. My line of thinking was that as soon as that happened magma would move up into the old feeder channel leading towards the volcanic vent known as Bob south of La Restinga.

Image by IGN. The darkblue and read area is where a new magma chamber has started to form like a stacked layer in a cake.

Instead a large quantity of magma has gushed into this new formative magma chamber, which is continuing to grow. There is a rule in fluid dynamics that state that as a bladder (balloon) grows the rate of growth will decrease as the volume increases. This is why it takes more and more magma to keep the pressure at a constant level during the expansion. This is why we see fewer earthquakes as the size grows. It takes a larger amount of magma going into the system to create the pressure for the earthquakes to happen. We will also soon see that the rate of rapid uplift will be decreasing. Do not take this as a sign of the risk for an eruption decreasing. It is quite the opposite. Why? The rate of magma arriving is still constant, so, in due time it will break through.

Magma seems to have entered into the old feeder channel to Bob, how far up though is anyone’s guess. But, it seems to have stopped flowing upwards now, probably due to the opening being plugged up.

Instead we are now seeing a small amount of earthquakes entering into the zone between 16 and 8 kilometers from the surface. What is most likely is that we will see more of them during the next 48 hours; with a bit of luck we will be able to pinpoint the formation of an earthquake stack. That would be good since that could point towards a general area where there could be an eruption. Currently that is pointing towards the western area of the island, but that might change rapidly. 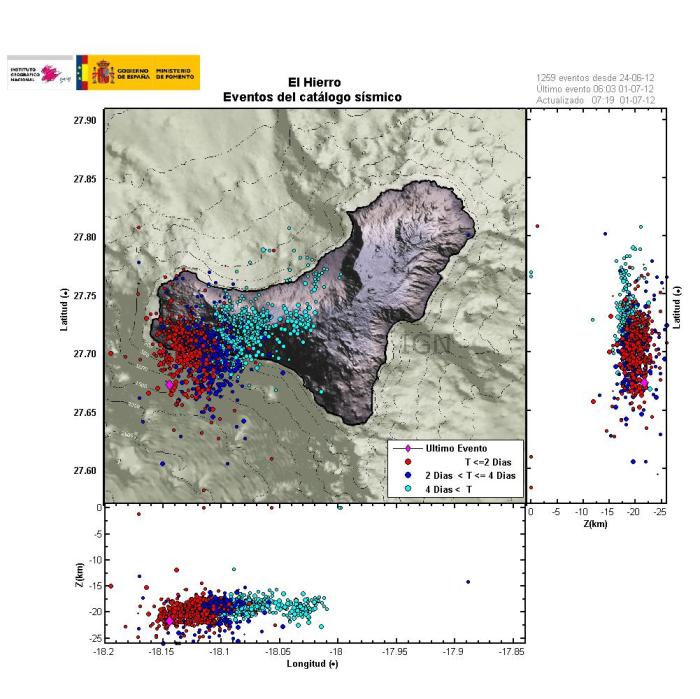 Image by IGN. A few earthquakes have started in the 16 to 8km depth range.

When the magma enters the region 8 kilometers and above the earthquakes will most likely stop, or be few and far apart. The reason for this is that there is a layer of old sediment there. Then there will be a brief flurry of earthquakes as the magma breaks through to the surface, unless it finds an old lava-tube, then it would be a quiet onset of eruption. The eruption would be of basalt or basanite, so it would most likely be a quiet effusive eruption. In the beginning it could be more vigorous due to gas pressure release.

During this second phase of the eruptive cycle the level of information given out has been much improved. IGN is now giving out real GPS data instead of cumulative data. That is a huge improvement. Also Pevolca has started to write reports that are filled with technical details that helps a lot, and removes any chance of people accusing them of hiding data. If IGN and Pevolca keep up with this new openness they will find that people will be much happier. So, from us a big thanks for this new approach.

I would also like to point out to the political establishment of El Hierro that the last eruption will in the end be a big boon for the Island. Before nobody pretty much knew that El Hierro existed. Now many do. And that should in the end raise the number of visitors, especially from the rather large cadre of volcano aficionados. So, instead of trying to hide your volcano, flaunt it a bit. Be proud of it, and people will come to watch your beautiful island.