Just to keep things in perspective.

Previously, Carl has pointed out just how lacking the VEI scale is.

VEI is based off of the total quantity of material that came out of the hole. In this respect, not a bad scale… but VEI means “Volcanic Explosivity Index.” What about the less energetic eruptions? Say, Kilauea? How about a volcano that makes a big show at first then oozes magma for a year afterwards? Eruptive sequences generally include the entire time that stuff is coming out of the ground, and in order to compare one eruption with another, one of the best comparison is by how much came out. VEI will be with us for some time, but it helps if you have some context as to what it means.

Eyjafjallajökull was out paced by Grímsvötn in about a day. Grímsvötn is a true monster, and fortunately for us, all it did was one of it’s lesser burps.

Here is a plot of volcanic plume height over a period of hours, and how much material, in “Dense Rock Equivalent” (DRE) that equates to. The formula was derived from Mastin et al, who essentially did an update on Sparks’ equation. The purpose was to get an estimate of the eruptive rate of a volcano based on sporadic or sparse information… such as only having plume height data of a remote volcano off in the middle of nowhere. 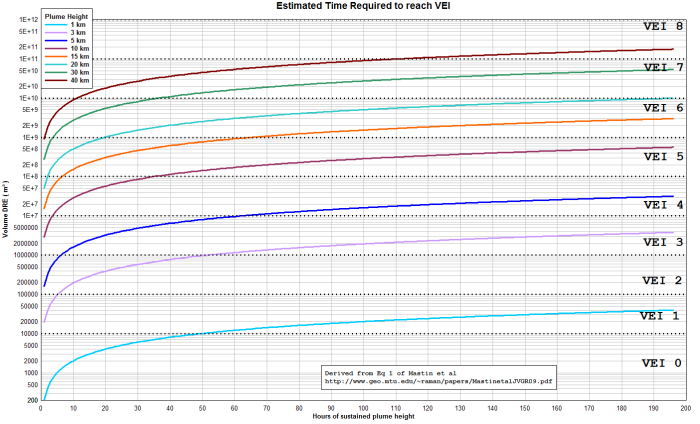 As you can see, for a sustained plume height at the indicated level, the mass adds up over time. As time goes on, eventually different levels of VEI are reached.

You can also see how Grímsvötn blew the doors off of Eyjafjallajökull’s “puny” eruption.

In “A multidisciplinary effort to assign realistic source parameters to models of volcanic
ash-cloud transport and dispersion during eruptions”  L.G. Mastin et al there is a formula that allows a computation of the mass ejection rate based on plume height.

It’s geared mainly towards volcanoes located in remote areas (such as Cleveland) and proves to be a handy tool if you put in a little work.

VAAC reports are probably the most handy reports available for any given eruption. VAAC is most concerned about keeping aircraft from plummeting out of the sky, so they try to stay on top of the hazard. This also means that their reports, though good, are more focused on the threat than the volcano. What the volcano is actually doing is little concern for them… what it did do is the most important. This means that once a plume is lofted into the air, the max elevation of the plume sort of remains fixed until it dissipates. The threat envelope will move around with the cloud… and generally the max elevation will remain mostly fixed.

If you are lucky, the VAAC report will state somewhere in the warning what the plume height is over the volcano. That is the data that a volcanophile will keep track of. That gives you the current state of the eruption.

Taking the time stamps for each report, along with the height of the plume over the volcano, and adding in the heights and time stamps from what ever geological agency reports, you can get a pretty decent record of the activity levels, and make a rough estimation (using Mastin et al) of the total amount ejected.

You do this by interpolating the rate from one data point to the next. You could connect the dots using a straight linear trend, or you could use some sort of poly curve or cubic spline (what ever your spreadsheet or data fitting program is capable of). From this curve, you need to get the interpolated increments down to one second intervals. Once you have interpolated timestamps and the estimated column heights at those moments in time, apply the Mastin formula to determine the DRE rate.

Then you just sum those rates in order to fabricate the total amount erupted to that point in time.

It may sound complicated, but it’s pretty straight forward.

And.. a very important caveat… the formula has an error envelope of a factor of four. That’s pretty large, but it gets you in the ballpark for eruption estimates.

This is about a fictional volcano.  Since it’s my construction, I choose to name it Mt. Gibbons.  (I’m a Billy Gibbons fan) On 1/15/2012  at 12:00, Mt. Gibbons erupted to an initial altitude of 15 km.  A compilation of VAAC reports and eyewitness reports from the Soso MS Volcano Observatory, show this for Mt Gibbons activity (plume height) 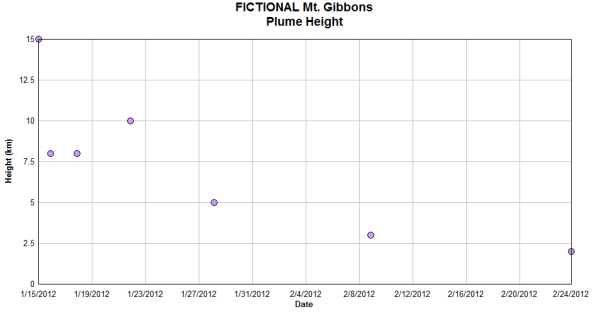 Calculating the number of seconds since the start and re-plotting, we get 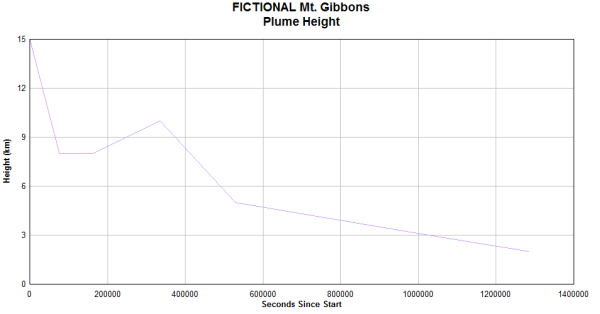 Now we apply the Mastin et al derived equation, this gives us the rate of the eruption. 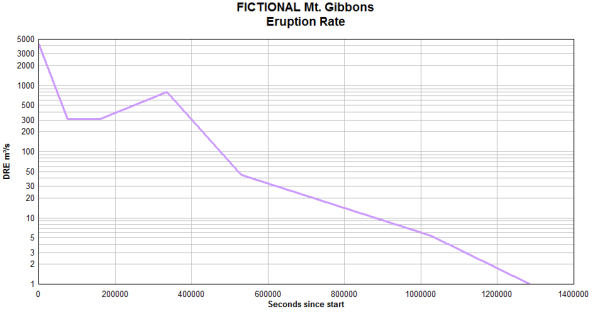 This is where I cheat.  Using the built in integrated function of Dplot, I have it calculate the integral.  You can do something similar with your spreadsheet program if you calcuate the linear trend between each point, then put together a running sum of those calculated points. 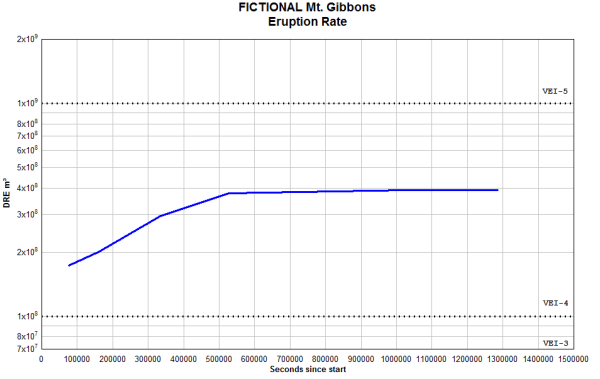 So.. as you can see, Mt Gibbons, starting to wane in activity at around the 24th of Febuary, will probably come in as a solid VEI-4. One thing that is very important, is to remember that the reference document, Mastin et al, clearly stated that there is an error factor of about four in the equation. In other words, this will get you into the ballpark, but it’s not full proof.

121 thoughts on “A bit about VEI, and a numeric tool for amateurs.”