SO2 is a volcanic gas (along with a lot of others) but specifically , SO2. SO2 is a high heat product… H2S is a low heat product. You can tell the difference by the smell. Burnt match smell, SO2, rotten eggs, H2S. Don’t run around sniffing for them, both can be lethal, and H2S deadens your sense of smell. SO2 turns to acid in your mucus membranes… specifically H2SO4. And that’s not a good thing.

But… that H2SO4 bit is important.

In the troposphere, where all the weather happens, H2SO4 yields “VOG” .. “Volcanic Fog.” In LA, they coined the phrase SMOG… essentially the same thing but with a little auto exhaust thrown in for good measure. It’s a pollutant, and tends to trap heat.

In the stratosphere, up above where all the weather occurs, H2SO4 acts as an umbrella, blocking sunlight and cooling things off.

A couple of days ago, a paper was linked here that addressed this issue, and noted a seeming connection with CO2 and the scavenging rates of both gases from the atmosphere by OH, the friendly hydroxyl radical. (it is the pre-eminent free radical that we try to avoid in our diets)

Now… it’s been a lot of years since I took chemistry, but I was trying to figure out the dynamics of SO2 to H2SO4 production. I used several chemical equation balancing programs… but they all come up with a weird issue in the of O2. Looking into it, it turns out the SO2 + H2O will produce sulfurous acid and not sulfuric acid. In order to get sulfuric acid, there has to be a catalyst. If you remember, a catalyst enhances a reaction rate though it is not destroyed by the reaction. (such as the platinum beads in your cars catalytic converter). In this case, the major catalyst is NO2, or Nitrogen dioxide. Nitrogen dioxide comes about from the O2 (oxygen) and N2 (nitrogen gas) reacting in a high heat environment… such as lightning strikes, combustion engines, and volcanic eruptions.

When an eruption occurs, there is an emission of SO2, it gets converted over to H2SO4, and if it makes it to the stratosphere, acts as a radiation shield blocking sunlight. How much gets that high up, depends on how much is released in the eruption, how fast it gets leached out of the column by the ambient humidity and the availability of NO2. That that is leached out of the column becomes tropospheric H2SO4 if it leaves the column and doesn’t make the trip the rest of the way above the tropopause.

I read a paper a while back… don’t have a link to it, but the paper indicated that tropical eruptions have a much greater leach rate than the higher latitude eruptions. They also have a thicker troposphere to punch through to reach the stratosphere.

From KarenZ, some links if you want to rummage around in some of the info about the gases

A USGS article about SO2

There was a paper that I was after, but could not readily locate, that dealt with a proposed scale for volcanic SO2.  I was able to find a related bit of info here

VSI was designed to fit the VEI scale so that you could get a quick and dirty, but relatively reasonable estimate of the SO2 emission of a Volcanic eruption. The scales are different for Arc (such as Tongario) and non Arc volcanoes.

Now… a “rickety segue” to the tropopause.  It goes well with the first plot of the number of Holocene volcanoes vs latitude.  This is a reworked plot from a few months ago.  I took about 5 years of tropopause info and averaged it out on a month by month basis. 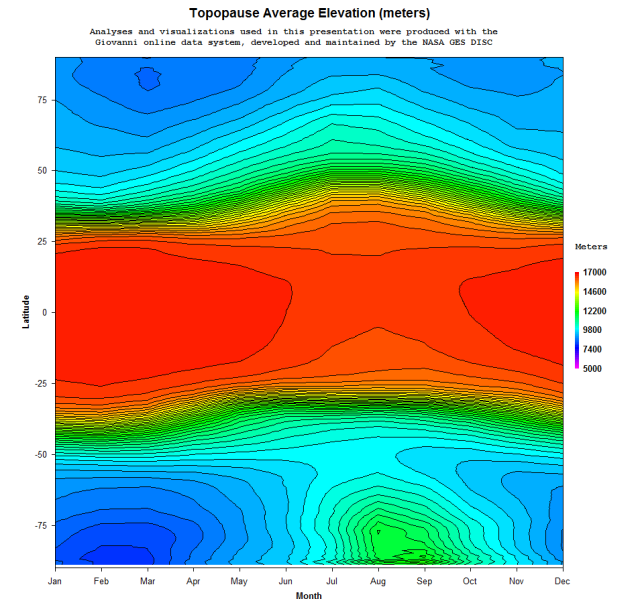 Before anyone beats me up about the prevailing conditions driving whether or not a plume crosses the tropopause and makes it to the Stratosphere, I understand that.  This is just a general guide so that you know about what altitude the tropopause will be at.

Note: the “rickety segue” phrase is from a Frank Zappa concert as he introduced the next song in the set.