This idylic scene is from Lake Tondano situated within the 20 by 30km Tondano Caldera.

Some volcanoes just can’t catch a break. Imagine for a little while that you are a bona fidé supervolcano. You are the largest of your type on the planet, you are highly active, and by gosh you have shown what you are capable of. In a perfect world your 20 by 30 caldera explosion should have put the world into awe, and the 1 000 cubic kilometer of DRE you ejected in the form of pumicious tuff covers an entire sub-continent. Yepp, you really did reach the small highly exclusive club of VEI-8 volcanoes. You smirk at your little sibling Monte Sommas antics with Vesuvius. Your Vesuvius event left a 3.5 by 5 km God honest caldera on its own. To top it off you have a huge underground reservoir of liquid acid that would seriously alter the planets weather if you felt like discharging it. You are also perfectly located to have a maximum kill ratio. So, you wake up and stretch your arms and start a double eruption from two different sub-volcanoes just to celebrate the new day. You have your largest eruption in recorded history. Then you look around to see the fearful faces of the residents as they offer up motorcycles in your name, you expect volcanologists doing somersaults as they play lip banjo, and literally thousands of blog pages glorifying your power and shear awesomeness. What do you find? Yawning people and a cockerel trying to wake up a pig sty. You find that for being an erupting supervolcano you are a massive PR failure. One single small earthquake at Yellowstone outperforms you in publicity.

Compund satellite image/map of the Tondano area courtesy of JPL.

The quarternary volcano of Tondano in northern Sulawesi (Indonesia) had its massive caldera event about 2.5 to 2 million years ago. Technically it is a somma type volcano, complete with the remnants of Pangalombian, a former stratovolcano that disappeared in a Vesuvian VEI-7 total caldera event.

Parts of the Pangalombian caldera were later covered by the now dormant Tompaso volcano that ejected large amounts of basaltic andesites in a long series of VEI-6 eruptions.

Todays Tondano is known for having acidic maar eruptions inside the caldera, a couple of mud volcano events during recorded history and no less than 4 active volcanoes, Lokon-Empung, Mahawu, Sempu and Soputan. Quite often Lokon-Empung and Soputan have tandem eruptions.

Lokon-Empung is a double coned strato-volcano located at the northern rim of Tondano. Lokon is a flat topped probably dormant volcano that no longer exhibits a crater on top and Empung is a historically active volcano that last erupted 1775. From 1829 onwards the site of no less than 25 eruptions has been Tompaluan, a smaller double crater situated in the saddle pass between Empung and Lokon. It has erupted since 2011 in tandem eruption with Soputan. The tandem eruption before that occurred on the 13th of May in 2000.

The current ongoing eruption is slowly working its way to becoming a VEI-3 eruption. But it has so far mainly been consisting of small explosive ash eruptions so it takes time to reach that level.

This small stratovolcano is located on the southern rim of the Tondano caldera. It is part of trending line of ring dyke vents that formed in consequent eruptions ending with the formation of Soputan stratovolcano. It normally erupts from either the flanking vent of Aeseput or through the unusually large summit crater that pretty much has the same width as the top of the stratovolcano. This is of course a sign of a very young volcano with a highly potent vent system.

The current eruption consists of ejections of small to moderate explosive ash plumes. The ash columns according to the Darwin VAAC have been up towards 12.1km, with several slightly smaller columns reaching 9km height during the last few weeks. Smaller explosive ash plumes have been pretty much ongoing for the last 3 months now. This eruption is quickly ramping up to becoming a VEI-4, and is as such the largest sub-aerial eruption since Grimsvötn 2011 and that is without even counting in Lokon-Empung into the picture.

As any volcano capable of a large caldera event Tondano has a large and intricate internal plumbing. It is believed that there is a very large reformed magma chamber at depth. As pressure increases in that magma chamber when new hot magma arrives it is believed that the magma either goes up into the caldera as emplacements, and that those sometimes cause maar explosions or reheats the very active thermal fields contained within the caldera. Or that the magma is pushed up into smaller sub-chambers under the active rim volcanoes. When that happens eruptions normally follows very rapidly. A sign of the rim volcanoes being systemically interconnected somehow is that Soputan and Lokon-Empung on many occasions has had eruption interspaced with mere hours.

As any Somma volcano the Tondano caldera is highly intricate and complex, and still it is surprisingly badly researched. The only good material is an Icelandic funded study on the possibility for hydrothermal energy plants in the region. Yepp, the Icelanders are going international with their knowhow.

Why it won’t happen

For those who dream dark dreams about enormously destructive eruptions Tondano is a bad bet. Why? Tondano has it all really, large magmatic influx, steady inflation, a large central chamber, active volcanism. Pretty much everything that it should need for a VEI-8 eruption. Except for 3 small things, it does not any longer have the amount of water necessary to drive an eruption like that. As many of you know water is a large part of large caldera events. When Tondano went massively caldera it was situated pretty much at ocean level, so as the final large eruption (probably a large VEI-7) happened and the top of the caldera slumped inwards the ocean roared in and what is probably the largest steam explosion happened. Think of it as hundreds of Krakatau eruptions happening at the same time, and you have the picture. As time has passed the land has been lifted due to tectonic uplift.

Second thing is that the magma before the massive caldera event was highly crystallized rhyolites. After the eruption the magmas have been predominantly alkali basalt-andesites.

And the third reason is that Tondano is very well vented as long as the rim volcanoes are connected to the central magma chamber. As soon as the pressure gets above a certain level the magma squirts into the sub-chambers and the volcano on top erupts.

To put it simply, Tondano is a champagne bottle with 5 bottlenecks. The cork is well fastened on top of the actual central chamber, so it cannot erupt that way. Then it has one volcano with the cork slammed back fairly well (Sempu), but that is not fully dormant. One that has the cork put lightly back on (Mahawu) and two bottlenecks that haven’t seen a cork for hundreds of years.

Basically, the pressure is almost constantly being released by Lokon-Empung and Soputan, and if that is not enough Mahawu erupts too. Last time Mahawu erupted with another of the volcanoes it was Lokon-Empung in 1958. Currently even if pressure got really high the only thing that would happen is that all 4 volcanoes would go off.

The only risk for anything really interesting happening would be if one or two of the vents got blocked off. Even then no caldera event would happen, but the likelihood of a Vesuvius event would increase a lot. Currently the candidates for that is either Lokon-Empung or Soputan. Soputan seems to have a very wide bore caliber vent so it could probably release the pressure without exploding from the face of the planet. But Lokon-Empung has evolved quite a lot more, and as it has grown older the vent has narrowed down considerably. If Lokon-Empung was subjected to high pressure it would probably not be able to handle the stress and subsequently go off with a VEI-6+. This is though not likely at current geological timescale.

The only real risk is that a magmatic emplacement will happen in, or around the large reservoir of sulphuric acid (water with a ph of 2). I think anybody can imagine how un-nice a maar event, or even worse, a phreatic explosion, would be if it happened to cubic kilometers of liquid acid. First of all it would make northern Sulawesi uninhabitable and kill off large portions of all life there. And a phreatic explosion would severely hamper the world weather for quite some time. Not a nice thought is it, an acid caldera event. I would decidedly not want to be around if that happens. 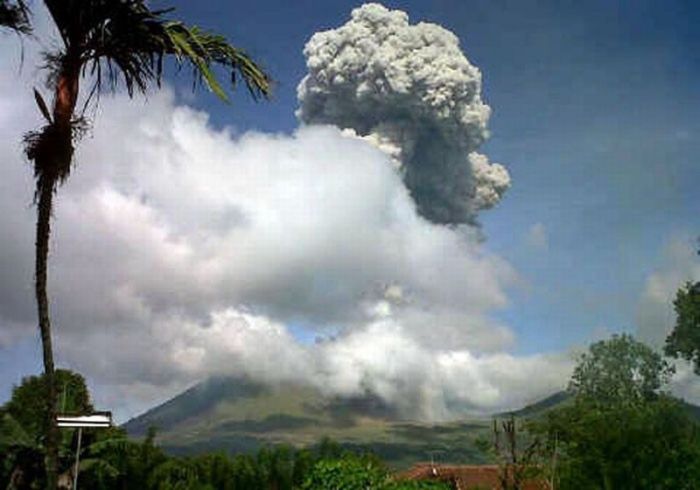 For being a highly active volcanic region with at best medium risk of fatalities the volcano is surprisingly badly monitored and highly under-studied. Almost all I have written is from one study alone, and that was produced by Orkustöfnun as a part of the geothermal engineering program. Interestingly that report predates the recent article in Nature about a new tectonic plate forming next to Sulawesi. You can clearly see the rift fault in one of the maps in the PDF. Nature seem to have done a bad background check on their paper before publication.

In reality if we look beyond the doom and gloom prophecies of a large caldera event volcano the risk is the bad monitoring. The area is heavily populated and an unexpected VEI-4 eruption at a flanking vent, or lahars, or pyroclastic flows will kill people, potentially a lot of people.

When a volcano of this size erupts and the world’s volcanologists, volcano-bloggers, and generally the large number of volcano aficionados yawn and continue to look at other less interesting volcanoes that is not even erupting, then something is a bit wrong. I happily admit that it took me almost a week before I actually got around researching the volcano. Then my jaw dropped and I started doing somersaults while playing lip banjo. It is just the sad truth that there are more well known supervolcanoes in the predominantly white western world that steal all the attention.

While we sit and moan about there being no interesting eruption we did not even reflect as we read that two more volcanoes in Indonesia erupted simultaneously 30km from each other. The only comments about it was that people rode their motorcycles inside an ash cloud to get to and from work (Lokon-Empung), and that a rooster cackled at a video of Soputan barfing up a 9km ash column. Then we went back to looking at out Katlas, Heklas, and the rest of the non-erupting volcanoes. Indonesian volcanoes could do with a good PR-Agency.

209 thoughts on “Did you notice the erupting Supervolcano?”