Prior to visiting Stromboli we had visited Etna, but I have left what the locals call Muncibeddu until last. It is obviously very well-known to anyone with even the tiniest passing interest in volcanoes, and many thousands of words have been written about its volcanology.

On a volcanic scale this is just a hemidemisemiquaver of a microfart, but to me
it is very special as it is the first real eruptive activity I have ever witnessed (I’ve seen fumarolic steaming before – Volcán de Fuego, Guatemala). Here Etna’s Bocca Nueva on the left pumps a bit of ash, while the New SE crater is steaming away nicely to the right. Two days after this the regular ash emissions from BN slowed down, while a couple of big explosions in the NSEC brought a chunk of the crater rim down.

Etna has joined a very select group of locations that I have been lucky enough to visit that at once became truly special to me, and I’m struggling somewhat to convey my feelings about the place. I can certainly understand why it has long drawn people from far away and who then find it hard to ever leave.
Perhaps it is the sheer scale of the mountain that is so wonderful. There can be few geographic features that dominate the surrounding land in the way that Etna towers over eastern Sicily. It is truly gigantic, and visible from many miles away in all directions. Even from the northern coast, where a line of impressive mountains fringe the sea, Etna can still occasionally be seen steaming in the distance, an order of magnitude bigger than anything else. 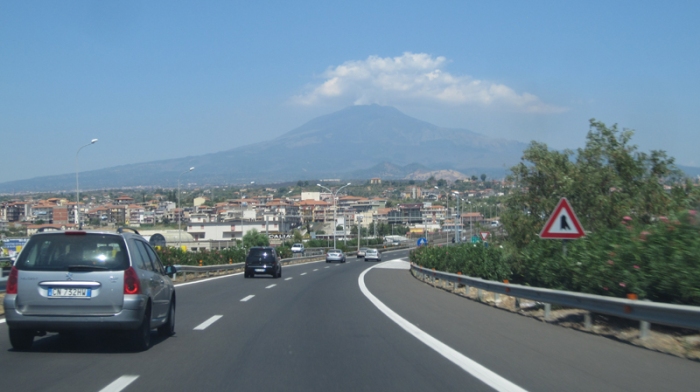 Etna looms large over the city of Catania, clouds adding to the fumarolic steam to enhance the volcano’s menace. Lava has reached the town on several occasions, notably in 1669 when the city’s walls deflected the flows into the sea. The reprieve was short-lived: a massive earthquake destroyed much of the city in 1693.

From a volcanic point of view it seems to have just about everything you could want – and mostly accessible, too. Craters and cones of varying ages are everywhere, each with its own story to tell of how it changed the landscape. Some of the younger craters still steam, and if you dig just a few centimetres into the ground then the residual heat is immediately obvious. 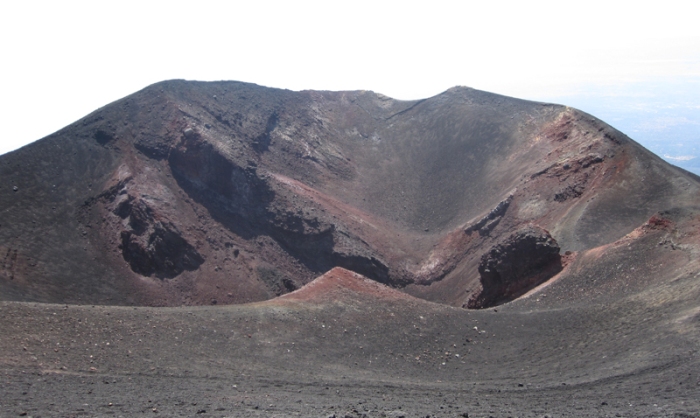 This is one of the two craters that opened up in 2002-03 just by the old Rifugio Torre del Filosofo. Steam still issues from the open mouth of one of them.

Etna’s upper slopes are covered in ash and lapilli from recent eruptions, creating a strangely rounded, smooth- edged, black world that is from another planet. Towering above are the central vents, always in action and always threatening.
Giant lava runs can be traced across the intermediate slopes, leaving islands of lush vegetation as they have twined around higher ground on their slow journey down the mountain.

Fact of life no. 127: you can’t keep a 14-year old out of a cave. Etna’s extensive lava fields feature numerous lava tubes, and this perfectly formed little beauty was just too tempting for the ‘Lill-Viggen’. The best his claustrophobic Dad could manage was to stick the camera in at arm’s length.

Etna’s lower slopes are home to beautiful forests and vineyards. Attractive villages – old-school Sicily mixed with modern Alpine influences – stand testament to man’s resilience to nature’s forces and the desire to milk the riches of fertile volcanic soils. I cannot quite put a finger on what it is about the place, but I want to live there!

“Honestly, all it needs is a tidy-up and a lick of paint…”
I admit to having fallen completely in love with Etna and the villages that surround it. However, my wife is yet to be convinced about this suggestion for a cheap holiday home for the Viggen clan. (House buried by lava flow on Etna’s southern flank).

Epilogue
I hope this hasn’t come across too much as a “look at me on my hols” post. If it has, then apologies. The humble aim of this effort was firstly to raise a smile or two, and to share a few first-hand thoughts and impressions about places that we talk about regularly as if we “know” them.
More importantly, I hope it might just influence someone out there to do something similar with other locations – or even these same ones – and jot down a few impressions for the rest of us. Science can be a beautiful thing, but nowhere near as beautiful as human experience!
 True, we went to real ‘tourist volcanoes’, but they’re still volcanoes, and it’s not our fault that they just happen to be located in beautiful, hot, sunny, accessible places where the food is simply a joy! And thanks to spending a little bit of time on the net the trip was very cheap. Forget the volcanoes, the ice cream alone is worth it!
Anyhow, I really am the last person to tell anyone what to do or not to do, but if I may offer some observations and guidance based on my experiences:
1) I have driven many miles in many types of vehicle in many countries, but nothing can adequately prepare you for that initial few minutes on Italian roads. Even if you have done it before, it’s still much scarier than you ever remember. To drive successfully in Italy is an artform, a triumph of timing, reflexes and brinkmanship over common sense and caution. With the first few kilometres tentatively behind you it becomes a challenge to be increasingly relished, but for a short while I really, really wished I still smoked.

2) If you are going to arrive in Naples expecting to find your lodgings in some unlit backstreet of a Camorra gang stronghold halfway up Vesuvius, in a strange rental car and with the Naples-Salerno motorway shut without warning and with no diversion signposted (actually, nothing in Italy is signposted to any degree of reliability), then do NOT do it at night without a very good GPS.

3) To get good photos of Strombolian action at the top take a tripod and a decent telephoto lens. I had the latter, but not the former, which is why you will not see my efforts here!

4) DO eat ice cream. For breakfast, lunch, dinner and at all times in between. There are a tiny handful of places in the rest of the world – for instance, Bosse’s Glassbar (Linköping, Sweden) – where one can acquire a genuine 10 out of 10 ice cream, but the chances are you will never, ever be in a place that has better gelato than the sunny parts of Italy, so cram in as much as you possibly can. You can burn it all off when you shin up Stromboli.

5) As Spica will also testify, Arancini (see Name that Lava) are extremely yummy

6) When abroad always do your bit to support the local economy, and fight the global advances of multinational corporations! (for example, a healthy-sized jug of red wine costs less than a Coke in many Sicilian restaurants).

This sure beats climbing, but in my humble opinion the 25-Euro Etna cable car just doesn’t take you far enough up the mountain. You’re probably only there once, so pay the full 60 Euros (!) and take the Unimog bus that takes you all the way up to the now-spectacularly-buried-under-ash Rifugio Torre del Filosofo. If nothing is happening you will still have an amazing view of the top of Etna, as well as being able to walk around a lapilli-covered ‘other-world’ of still-steaming craters. If something does happen, you will have the best seat in the house (or maybe you will be running, in which case there’s no finer way to die for a volcanoholic!)