Now imagine 192,500 of these dump trucks passing your door. That’s right 192,500. Every second. Oh, and they must be going at a speed high enough to shoot 50 km into the air. (I’ll let someone else do the calculation on that one). But they are very fast dump trucks.

Got the picture?
No, well I haven’t either. Let’s try ships:

Sabrina I cargo ship from Wikipedia

This one here can carry 40,000 tons. That’s handy. Right, imagine 192 of these passing your door every second. OK, now we are getting somewhere. I can almost imagine that. 192 very fast ships, every second. Well, this is the eruption rate of the most powerful unit of the most recent major Taupo eruption, the Hatepe eruption in 181 CE (or 233 CE, according to radio carbon dating by Sparks).

In fact, I am wildly underestimating the volumes involved, because those dump trucks are not filled up with dense rock (magma equivalent), but light, aerated pumice. Lowenstern (or somebody else) from the Yellowstone Volcano Observatory once said rhyolitic magma can expand by up to a factor of 630 due to the exsolution of volcanic gases. I don’t know how many dump trucks you need to carry 40 tons of pumice, but it’s a lot. Same goes for ships.

We have entered a sphere that is simply inconceivable. We are in the domain of the mega-scary.

Here a list of some more stats, the bulk of which are taken from assorted papers published by C.J.N. Wilson:

The Hatepe eruption was the most violent Plinian eruption in the last little while. You probably have to go back 5,000 years to find anything with a bigger bang, although over the last couple of years I have come to doubt the veracity of this claim. Tambora, Krakatoa, Baekdu/Changbaishan were also pretty big eruptions, but possibly they just took a couple of hours to do what Taupo did in a few minutes.

In sum it is likely that up to 120 km³ of magma was erupted in the Hatepe eruption over the full course of the episode. Of that total, approximately 35 km³ seemed to go up in the space of just a few minutes (the bit I tried to describe above). Imagine this volume suddenly getting shunted up to an altitude of 50 km. That’s right, 50 km. About one third of the way to low-earth orbit. Higher than Felix Baumgartner.

Think how much energy a space shuttle needs to shunt a couple of tons that high and you start to get the idea of how powerful this eruption was.

But what goes up, comes down. And this one came down with a wallop. The ensuing pyroclastic flow is thought to have been 1.5 km high and travelling close to the speed of sound. It surmounted Ruapehu, 65 km to the southwest and at least 2100 m higher in altitude than the vent. 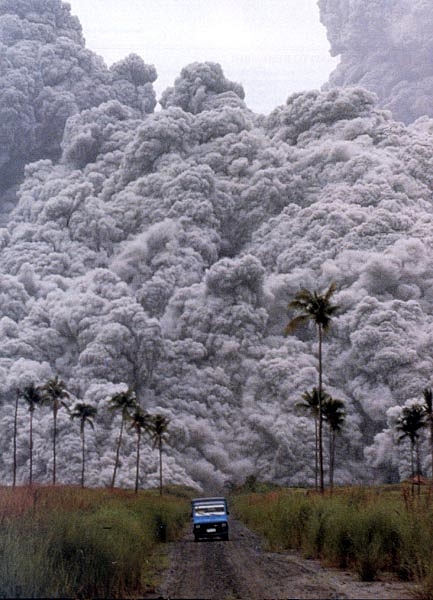 The force of this catastrophic event is also recorded in the nature of the deposits: the ashfall from earlier parts in the sequence blankets 30,000 km² east of the vent with 10 cm of ash but the ignimbrite left behind by the final pyroclastic flow is laid out in an almost perfect circle, extending 80 km from the vent in all directions and covering 20,000 km². 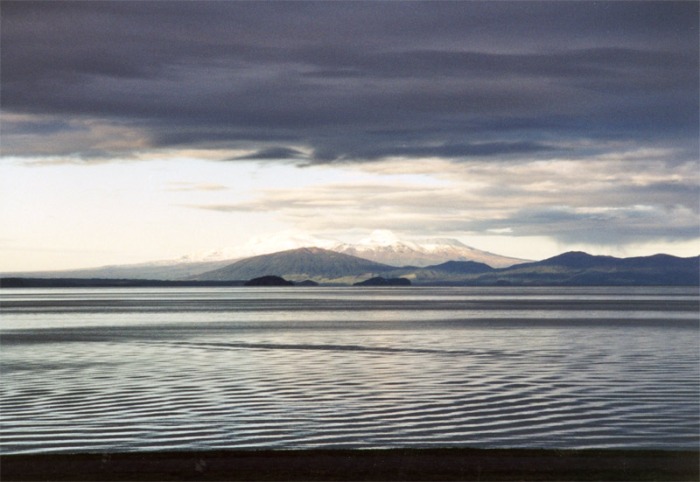 When we grew up, the northern horizon was dominated by the distant and majestic cones of Taranaki (we called it Egmont back then) and Ruapehu. I remember seeing the eruption cloud from Ruapehu while driving down to my grandparents’ place on the beach, miles to the south. What’s more, back in the sixties and well into the seventies, Ngauruhoe erupted in regular Strombolian bursts. For us, these were our volcanoes and Taupo was well, just known as “The Lake”. You could still be forgiven for overlooking it as a volcano because it simply isn’t there. Just a ruddy great hole in the ground full of gloriously clean water and rainbow trout.

It’s not even round, like a crater, but totally irregular in shape. And it’s a big lake, stretching 46 km on its longest axis and 33 km in breadth.

Sure, some people told us Taupo was an even bigger volcano than Ruapehu but this sounded like legend or some fact of the long distant past because it obviously wasn’t anything like Ruapheu now. It was only later, that I started to read up about volcanology that I realized how wrong our impressions had been. Not only was Taupo never ever a nice big mountain, but, paradoxically, it is way bigger than Ruapehu in terms of volume of erupted tephra. It is also very, very active, still today and makes Ruapheu look positively gentle.

So, just how big is this hole in the ground we call Taupo?

The current Taupo caldera takes an oblong shape, which is kind of interesting as Okataina displays the same rectangular shape. More on the significance of this later. The actual caldera basin is, logically, much smaller than the lake but is still quite sizeable:

This hole in the ground has produced 28 eruptions in the last 26,000 years following the massive Oruanui eruption (although eruptive activity actually goes back about 300,000 years). And, precisely because the Oruanui eruption reset the system, most of those eruptions were in the latter half of those 26kA. Thankfully most of them were small. But at least four of them were scary humdingers and two of them were off the scale. Moreover, its eruptions appear chaotic with no discernible pattern in the size or the repose time between eruptions. Look at the chart of recent eruptions to the left. See any patterns?

Yeah, all well and good, but why? Why is Taupo so prolific? Why is there no pattern in the repose time? Why is it so violent? Why is it even there? What makes it different from any other subduction scenario around the world? I’ll try to answer these questions in the next installment.