Monte Corona from the northwest.

When it formed around 21,000 years ago the Corona tube came to an end when the lava flow reached the sea. In the subsequent post-glacial period the vast ice-caps retreated, raising the levels of the world’s oceans.

As sea levels rose so the outer reaches of the tunnel became inundated. Sea water penetrated into the tunnel as far as an area known as the Cueva de los Lagos (‘cave of the lakes’), around 600 metres inland from the current coastline. During the reshaping of the Jameos del Agua that took place in the 1960s/70s the tunnel was artificially cut off from the sea. Water that remains in the caves upstream has collected by the seepage of rainwater.

A tunnel leading from the jameo closest to the sea provides access to the underwater portion of the tunnel. The 1618 metres of the tube that is now under the sea is known as the Túnel de la Atlántida (‘Tunnel of Atlantis’), and is the longest underwater volcanic tube known. It was not until 1988 that cave-divers completed its exploration. Features of this section are the Montaña de Arena, an 11-metre high mound of sand that has accumulated underneath a small hole in the roof of the tunnel, and the Lago Escondido, an air chamber that can only be reached through the submerged portion.

The Túnel de la Atlántida has created distinct anchialine biotopes where strange creatures have made their home. Shut off from virtually all light apart from a small amount in the Jameos del Agua lagoon, these animals are blind and lack any pigmentation. Seventy-seven species have been discovered in the anchialine sections of the cave, including the galatheid crab (Munidopsis polymorpha) that has become the symbol of the Jameos del Agua. While this tiny white creature is the public ‘face’ of the caves, it is two recently discovered species of remipede (Speleonectes ondinae and atlantida) that are scientifically the most noteworthy, as they had previously not been found on the eastern coasts of the Atlantic. 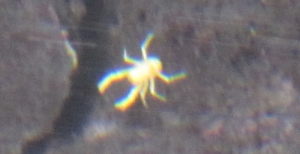 Galatheid crabs thrive in the partly lit lagoon at Jameos del Agua. The blind creatures grow to about 2 cm in length. This poor chap appears to have lost a leg

Humans and the tube

With the jameos providing ready access to the tube, humans have used sections of the tunnel for many centuries. Its constant temperature of 19°C made it a natural place for food storage, and it became an important place of refuge.

During the 16th and 17th centuries Lanzarote was repeatedly attacked by pirates and slave-traders, mostly from North Africa, but also from northern Europe. Such attacks ranged from small raids to full-scale invasions. In 1617 the English adventurer Sir Walter Raleigh laid waste to the main port at Arrecife, one of his last actions before being beheaded on his return to England as an appeasement to Spain. A year later a 5,000-strong army of Berber pirates led by Solimán pillaged the island with much bloodshed. 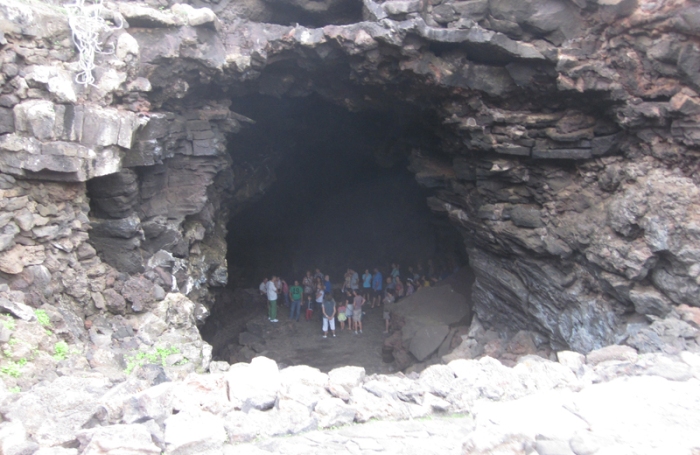 A group of tourists prepares to descend into the Cueva de los Verdes. In times past islanders used the caves to shelter from pirate attacks that primarily came from England, France and North Africa

During these raids – and others – the jameos of the Corona tube became a natural hiding place for the island’s population, in particular a system of caves known as Cueva de los Verdes. Such use of the caves is first recorded in the 1590 writings of an Italian engineer, Leonardo Torrini, who noted that the caves also provided an underground route to the sea should the need arise to escape by boat.

Despite its name, the ‘Cave of the Greens’ is not green at all, being named instead after the Verde family that owned the land. During the more peaceful times (at least for the island) of the 19th Century the cave became a popular destination for wealthy European travellers visiting the Canaries. In the early 1960s, as Lanzarote began to grow in popularity as a package holiday destination, the local authorities decided to develop the Cueva de los Verdes as the island’s first major tourist attraction, which opened in February 1964.

While cavers had opened up more than 4 km of the tube, around 1 km was prepared for casual visitors, featuring up to three levels in one section. Walkways and atmospheric lighting were devised and installed by architect Jesús Soto, a close collaborator of the renowned Lanzaroteño artist Cesar Manrique. Incidentally, Soto also schemed the Ruta de los Volcanes, the road that now carries the tour buses through Timanfaya national park.

Although there are some still ponds in the cave system, it is largely dry. Most of us know limestone caves, formed by water erosion. As the Cueva de los Verdes was formed by an entirely different process there are none of the familiar stalactites and stalagmites. However, in many places there are small ‘lavacicles’ formed by the solidification of lava that has spattered on to, and dripped from, the roof of the tube. In some parts of the tube they form pointed rows known as ‘diente de tiburón’ – ‘shark’s teeth’.

Lava spattered on to the roof of the tube forms ‘lavacicles’

Throughout the tube there has been considerable collapse of roof material, there are many areas where the original smooth tube wall is obvious, with a rougher, flat floor where the lava stream has solidified in situ.

Downstream of the Cueva de los Verdes, shortly before the tube dips under the sea, are the Jameos del Agua. Along with the Timanfaya volcanoes, this location has become the island’s most popular visitor attraction. Two jameos  – Chico and Grande – are linked by a lagoon partially lit by a small opening in the chamber roof. Here the famous white crabs can be seen in a part-natural, part-sculpted setting created by the vision of Cesar Manrique. 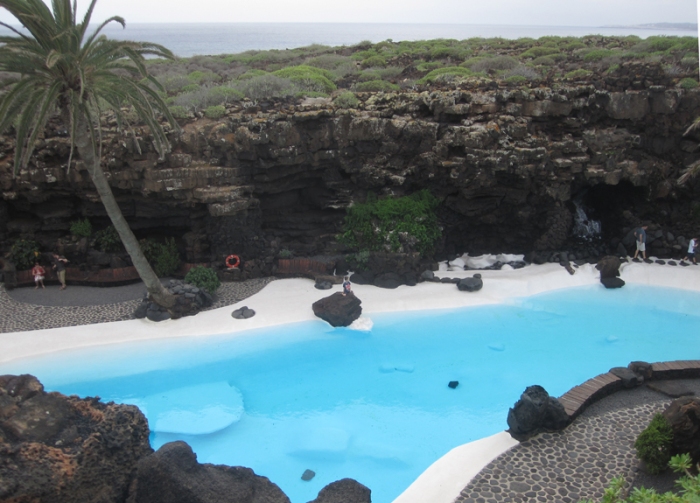 In the Jameo Grande a typically ‘Manrique-esque’ lava garden has been created, with a serene blue-water pool. Although it is Manrique who is credited with the concept of Jameos del Agua, apparently it was Soto who oversaw much of the detailed design and the day-to-day work. The first section was opened in 1966, and further areas were opened up progressively until 1977.

Beyond the Jameo Grande, in the tube itself, is a subterranean auditorium used for concerts (a smaller auditorium is also to be found in Cueva de los Verdes). Above the jameos is a visitor centre complex, including the highly recommended ‘Casa de los Volcanos’, a volcanological research and educational establishment.

It may not quite be a VolcanoCafé, but this LavatubeCafé at Jameos del Agua could be the next best thing

181 thoughts on “A Tube´s tale: Part 2 – strange creatures and the human touch”