For all who missed it
Here is a collection of the screenshots i took during the latest episode of Etnas shows. Paroxysm #8 in the year 2013 during nightfall on March 16th.

The images were taken from the lower right cam of the INGV site.

There was only one camera giving one a clear view on the action. All others i checked were either covered in clouds or stuck. Cause the folloing cannot really be called a brilliant image. 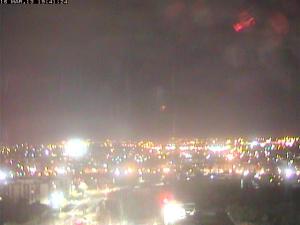 Dr Boris Behncke provides a stunning image and a video on his Flickr page. Please also read the detailed description below his footage. You could also follow EtnaBoris on Twitter to get a warning in advance in case the next paroxysm should be on its way: https://twitter.com/etnaboris
Here is last nights tremmor graph:

Stromboli put on a little more of a show as it normally does yesterday too and KarenZ saw it and took a screenshot.

Iceland and New Zealand saw earthquakes but nothing stunning is going on so far.

The site to watch are: http://en.vedur.is/earthquakes-and-volcanism/earthquakes/ for Iceland and http://geonet.org.nz/quakes/region/newzealand/2013p203051 for New Zealand ( Thanks for the notification Mike Ross)

All name that volcano riddles were solved:

No 1 – Sao Vicente Alison (at 14.21)  1 point
Anagram of active ones.
Although volcanic in origin, the island is quite flat. Its highest point is Monte Verde (Portuguese for green mountain) located in the northeast-central part with an altitude of 725 metres (2,379 ft). Although a great amount of erosion has taken place, some craters still remain, in particular near the bay of Mindelo. Other mountaintops include Monte Cara and Topona.
http://www.volcano.si.edu/world/volcano.cfm?vnum=1804-03-
http://en.wikipedia.org/wiki/S%C3%A3o_Vicente,_Cape_Verde
http://www.volcanodiscovery.com/sao-vicente.html

No 2 – Erta Ale – arjanemm at 17.34 1 point
Erta Ale is a continuously active basaltic shield volcano in the Afar Region of northeastern Ethiopia, the most active volcano in Ethiopia. It is in the Afar Depression, a badland desert area spanning the border with Eritrea, and the volcano itself is surrounded completely by an area below sea level, making it a relatively low-elevation volcano.
http://en.wikipedia.org/wiki/Erta_Ale
No – 3 Mount Liamuiga – Granyia at 18.58 1 point
Mount Liamuiga was formerly named Mount Misery. The renaming took place on the date of St. Kitts’ independence, September 19, 1983. However, many older citizens still refer to it as Mount Misery. The name Liamuiga is derived from the Kalinago name for the entire island of St. Kitts, which means fertile land.
http://en.wikipedia.org/wiki/Mount_Liamuiga
No 4 – Katla – El Nathan at 18.43 1 point
Katla is a large volcano in southernIceland. It is very active; twenty eruptions have been documented between 930 and 1918, at intervals of 13–95 years.
http://en.wikipedia.org/wiki/Katla_volcano

Which makes Alison the “ruling lady” of this type of riddle unlikely to be caught any time soon.
Congratulations to the winners!!!