Kobba informed us that the alert level at Hekla was raised to yellow:
“http://www.dv.is/frettir/2013/3/26/ovissustig-vegna-jardhraeringa-i-heklu/
Some things are up with Hekla….Alert levels raised to yellow due to “peculiar unrest” in Hekla”

The Icelandic Meteorological Office has informed the National Commissioner for Civil unusual Seismicity at Hekla. IMO has also increased monitoring points Hekla to yellow due to air traffic, which means that the volcano show unusual activity.

Uncertainty level civil means for increased monitoring of the actions of that at a later stage could lead to health and human safety, environmental or building will be threatened. To describe the level of uncertainty is part of the processes in the organization of civil protection to ensure formal communication and information. Uncertainty level is declared to inform the appropriate emergency and is a process in civil emergency planning and the lowest of the three.

In light of this, will the National Police Commissioner and the Commissioner of Hvolsvöllur warn people on journeys while Hekla uncertainty level is valid.”

Erik Klemetti has the news too on his blog Eruptions. Alert Status Raised at Iceland’s Hekla 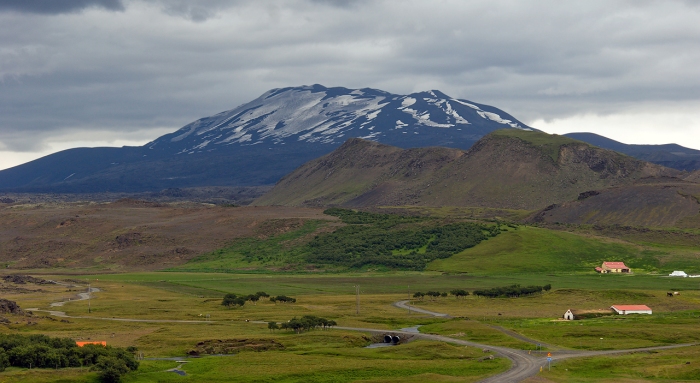 Icelander: “VC staff photographer has sent us this test image. Expect more of it in action, whenever that will be. Enjoy. http://i50.tinypic.com/2e5v5ax.jpg

Yes, these were for express use of VC and be used when Hekla became “imminent”

Copyright lies with the photographer. Here is another angle from October last year.
“http://i49.tinypic.com/1z9jsw.jpg ”

Here are plots by chryphia of Hekla´s local earthquakes from 2000 until today.

The last two earthquakes from the listi were on Mar 21st and 23rd and were located in the small group at 10 km depth:

Hekla seismicity 2000 to 2013, view facing West. The depth axis is compressed about 2x in order to get the Moho layer (http://www.seismo.helsinki.fi/mohomap/) into view. The topology is from geodas-design-a-grid.

Icelanders image and his explanations: Quote: “for these watching IMO uncorrected strain charts – this is how they appeared in April 2012, the month I thought it whould go off, so nearly 12 months old.
Notice the large drops at HEK (other stations were not operating then). Graph is stretched or schrunk, to get “same unit scale” (a feature or the Original IMO charts I do not like, is that their scale is NOT constant, but fortunately they are scaled, so here goes). http://i45.tinypic.com/ziopkw.jpg
Yess, top graph is BUR, same days as HEK (lower). I have the days before these too. Including a big quake of international standards, first a meeting, then more plots (Yes these are mine “Scale-ings”!)”

Remember Carl wrote a lot of posts on Hekla, you can find them here.
Spica