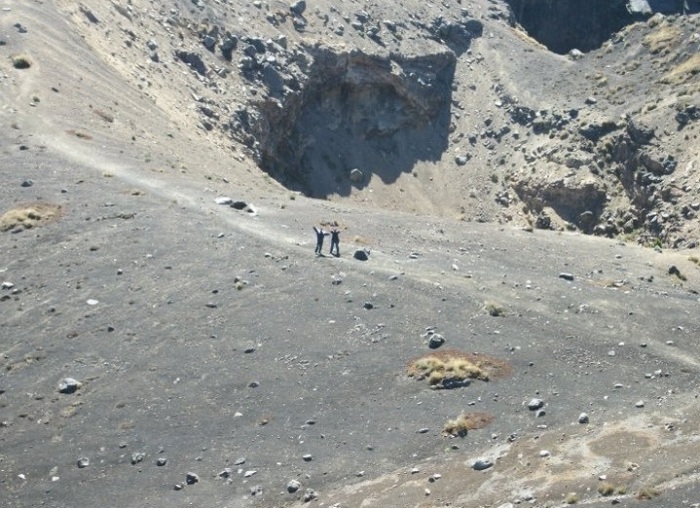 Having the brain rebuilt from top down every Friday never get’s old. I do not know how you guys are doing since I am bad at both riddles and recognizing lavas and volcanoes.

But it is fascinating to witness how the blood hounds of the Volcano Café unerringly zeroes in on the pray. This week I want the name of the lava, the volcano and the name of the local fast food. So, 3 points to be had all in all. I will of course ding when someone has scored.

Tomorrow, or the day after I will post you an explanatory article.

Photograph by Eggert Nordahl under permission.

Herðubreið is a tabletop volcano (tuya) in Iceland that has been active during the last few years with repeated earthquake swarms and magmatic emplecements. Supposedly the volcano is a defunct part of the Askja volcano. Evidently it is not as defunct as previously believed, and there is quite a lot pointing to it not being a part of Askja.

So, last night I proposed that we should do something with the volcano since it is rather poorly investigated. Ontop of the two questions above we can also have a bit of fun with the youngish looking strato volcano on top of the tabletop mountain. Here is the question, have it erupted after the last glacial period?

I thought we could do this as a case of crowd science. We have access to some equipment, we have access to a lot of people with various expertise, so we could actually collectively make a fairly nice piece of scientific work on Herðubreið.

So, in another word, I propose that Volcano Café officially adopt Herðubreið as our project. Now and then we should post status reports on our progress, if anyone feel up to it, being the collector and editor of what has been said please do not hesitate to come forward! Herðubreið and Volcano Café needs your services.

Have a nice weekend everyone!

At the intersection of Rts 36 and 119 Peter was totally over come by the glowing clouds; then Bill, Andie and Chris arrived to cover the celebrations!

Glowing clouds was the English translation of a French term nuée ardente first used to describe the pyroclastic flows of Mount Pelee that engulfed the town of St Pierre in 1902 killing 30,000 people.

1 point KarenZ for Candlemass Island … “At the intersection of Rts 36 and 119; then Bill, Andie and Chris arrived to cover the celebrations!”

The clue pointed to the movie Groundhog day (1993) set in Punxsutawney, starring Bill (Murray), Andie (MacDowell) and Chris (Elliott). Groundhog Day is the US term for Candlemass Day.