While we are pondering the deep magmatic earthquakes that are taking place under the Harðurátungusprungu I thought we should teach the news media that there are many volcanoes in Iceland.

Some newspapers seem to only know about Katla and perhaps Lakí, and if they are really spiffy they might have heard about Hekla. A few days ago  I mentioned that 40 percent of all eruptions in the last 1 000 years came out of two volcanoes, namely Grimsvötn and Hekla and that by adding 3 more volcanoes for the same time period (Askja, Bárdarbunga and Katla) would get you up to 90 percent.

So, in theory the Daily Fail would get it correct if they just harped those five names in their doomsday prophecies. We of course know that is not correct, there are those pesky ten percent remaining, and in most aspects they are the most interesting.

As some of you know I collect Icelandic volcanoes, after all a man just got to have a hobby in this life. So I thought I would present my collection of Icelandic volcanoes. I will only count volcanoes that have erupted after the last glacial, or during the absolute end of the Ice age.

First, almost all Icelandic volcanoes are arranged along something called a fissure swarm. In most aspects the fissure swarms are the volcanoes. But some of them form what is called central volcanoes; they are permanent weak spots that have formed a separate magmatic system with magma chambers. There are also other types of volcanoes in Iceland, for instance those that have only erupted once and might become a central volcano, and then we have rhyolitic fields.

So, to organize things a bit I will start down in the southwest and move up to Hengill, then I will go northeast up almost to Vatnajökull, then jump back to Hengill and move over to Hekla, then start over at Vestmannaeyjar and go upwards to Grimsöy. To further organize things I will put the fissure swarm in bold, central volcanoes in Italic, and other volcanic features in plain text. I might also put in a comment or two. Remember, these are the ones known to have erupted.

Now, let us take a plunge out into the depth of the Atlantic Ocean and visit the place where the last of the Geirfugl was stomped to death before being fried and their eggs was cooked. 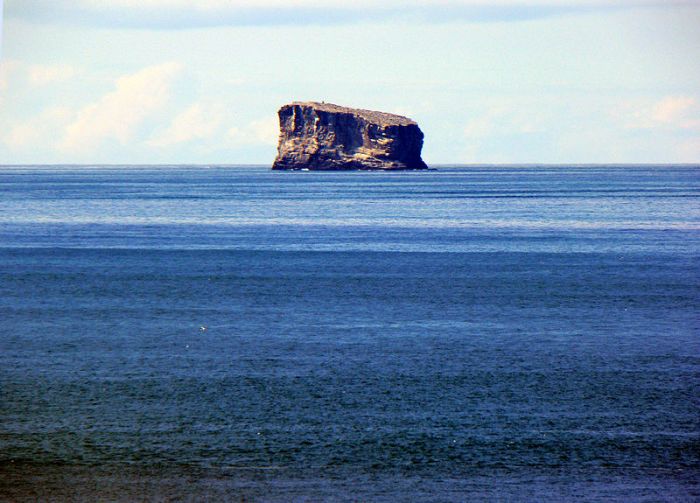 Mid Atlantic Rift / Reykjanes Ridge, Unnamed volcano, Geirfugl, Eldey. There are most likely at least two more volcanoes out there.

Svartsengi, Reykjanes, Svartsengi, Eldvorp. These three are believed to have independent magmatic systems, but they lack normal features for a central volcano, instead they erupt in within their own separate fissure systems.

Krísúvik, Krísúvik. This volcanic fissure runs from the coast up to Reykjavik where in passes quite literally on the backdoor of the Capital of Iceland. Eruptions have occurred both along fissures, and in the central volcano. 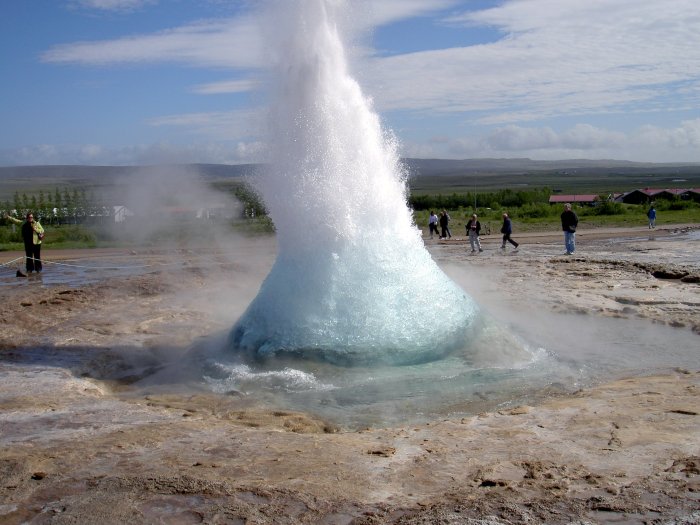 Geysir, the point of origin of the name. Photograph from Wikimedia Commons.

Langjökull, Langjökull & Hveravellir, Geysir. Even though Geysir has not erupted since the last Ice age I still mention it due to it having an active separate magma system. The Langjökull fissure swarm also has 7 shield volcanoes.

Hofsjökull, Hofsjökull & Kerlingafjöll. Even though Kerlingafjöll probably have not erupted since last Ice age I leave I put in since it is believed to have an active magmatic system.

Tungnafellsjökull, Hágöngur, Tungnafellsjökull & Vonarskard. Although neither of the central volcanoes have had an eruption since the last glacial they still all have active magmatic systems. Also, I leave them in since there have been eruptions from this fissure swarm after the last Ice age.

Southern Icelandic Fracture Zone, This is an oddity among the Icelandic volcanic fissure swarms. It is mainly a tectonic feature, but still it have erupted after the last glacial. There is one small central volcano marked in the maps at the western end of the SIFZ, and there are also rhyolitic fields at the northeastern end.

Hekla, Hekla, Litlu Hekla. The Hekla fissure swarm is the only volcanic feature in Iceland being able to erupt two different lavas altogether. While the Hekla and Litlu Hekla have erupted andesitic lavas the rest of the swarm erupts baseline Icelandic basalt. Hekla is the second volcanic fissure to start forming a stratovolcano in the area, the first attempt is still believed to be active even though it has not erupted since the end of the glacial.

Vestmannaeyjar. The Vestmannaeyjar fissure swarm does not have any central volcanoes, even though a magmatic system exists under The Heimaey Island. The most well known volcanic features on the swarm are of course Surtsey and Eldféll.

Myrdalsjökull, Katla, Gódabunga & Éldgja. Right outside the edge of the Katla Caldera sits the well known Gódabunga crypto-dome, even though it has not erupted historically it has had several large magmatic intrusions during the last 15 years. The Éldgja rifting fissure eruption is the largest known magmatic eruption from the Myrdalsjökull fissure swarm.

Vatnafjöll, Vatnafjöll. Vatnafjöll was up until slightly before settlement one of the most notoriously erupting volcanoes in Iceland. It is the source of numerous flood basalts and have created an elongated fissure volcano over a massive magmatic system.

Veidivötn, Torfajökull, Jökulsheimar, Hámarinn, Bárdarbunga & Kistufell, Veidivötn, Vatnaöldur, Odhadhahraun, Thjorsáhraun & Trölladyngja. The largest and most powerful of all the Icelandic fissure swarms The Veidivötn has no less than two VEI-6 central volcanoes, and in the southern end we find the massive Veidivötn rifting fissure eruptive conglomerate swarm and the adjacent Vatnaöldur rifting fissure eruptive conglomerate. The fissure swarm starts at the large Torfajökull caldera central volcano and ends up north of the massive Trölladyngja shield volcano. From Bárdarbunga northward you have Kistufell believed to be the hypocenter of the Icelandic hotspot. This fissure swarm has erupted 3 out of 5 of the largest postglacial basalt floods on the planet.

Veidivötn fissure swarm has the largest prolonged amount of magmatic uplift in Iceland, and is currently suffering from a magmatic sill intrusions at Harðurátungusprungu (there is actually no known name for this place so “Hard on the tongue fissure” is as good a name as any). 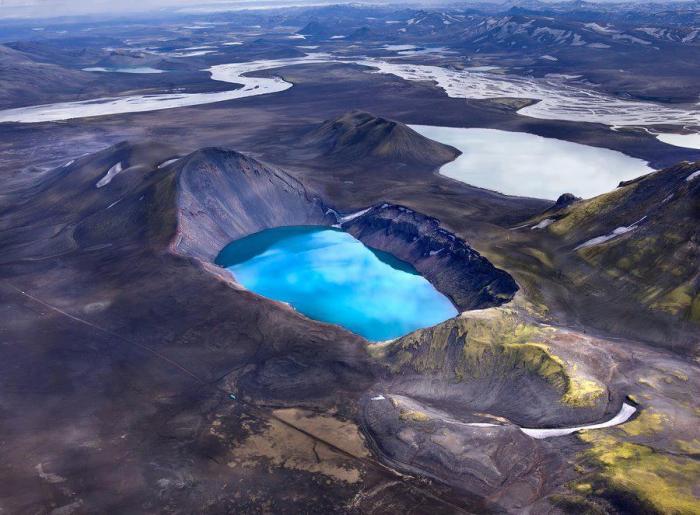 Photograph by Andre Ermolaev. The Crater Hnausapollur (Bláhylur) is still active. It’s last eruption was in the year 1480. Bláhylur lies right next to the highlandroad F208, the Fjallabaksleid, about 10km north of Landmannalaugar. Thanks to Stefan for correcting my mistake.

Herdubreid. A central volcano that last erupted during the absolute last stages of glaciation or perhaps slightly afterwards. It is sometimes claimed to be a central volcano on the Askja fissure swarm, something that is highly dubious since it is situated far outside the known eastern boundary. It is also called in the literature for Iceland’s only fissure less volcano.

Grimsvötn, Eldgigur, Hágöngur, Geirvörtur, Thordharhyrna, Háabunga, Grimsvötn, Kverkfjöll & Upptyppingar, Lakí. This is the second most eruptive volcanic fissure. It is the home to the massive nested caldera volcano of Grimsvötn that had its last VEI-6 eruption 10 000 years ago. Infamous for having had the deadliest eruption in the history of mankind. This fissure swarm has erupted 1 of the 5 largest postglacial basalt floods on the planet.

Snaefell, Öraefajökull, Esjufjöll, Breidabunga, Godahnukur & Snaefell. This fissure swarm also has quite a few highly rhyolitic fissures that have erupted since the end of the glacial. Öraefajökull has had the largest explosive eruption during the last 1 000 years in Iceland.

Krafla, Namafjall, Krafla,Gjastykki & Jökularsandur . Most known for the late Krafla Fires eruption where a series of fissures opening up providing spectacular but non explosive fire curtaining. The Krafla central volcano though shows signs of having had a couple of more explosive turns previously.

North of Iceland there are several sub aquatic nameless volcanoes that has erupted since human settlement on the island. And now over to the westernmost volcanic fissure swarm on Iceland.

I hope that you all liked this little walk down the volcanoes of Iceland. And if you work for the Daily Fail and actually read this. Please understand this, even a large eruption in Iceland would not even be close to the end of the world, so stay away from scaring people unduly.

No 1 – An untimely, weather related alliance with some paratrechina longicornis added to the mass destruction. SOLVED Santa Ana (Hurricane Stan)

No 4 – Despite suffering a twisted colon he directed both sides of the story. SOLVED Mount Suribachi

No 6 – Although now known as fertile, according to the older local farmers it is still a deeply unhappy place. SOLVED Mount Liamuiga (Mount Misery)

No 7 – No champagne for Jean-Claude following his first descent. SOLVED  Mount Ngauruhoe

381 thoughts on “Edificating the Daily Fail and Friday’s NtV Riddle!”