I was asked to prepare a talk for a “Deep Space” Live show on September 26 in the Ars Electronica Center, Linz ,Austria. “Deep Space” in this case is our special presentation room with 2 screens 16 x 9 meters on one wall and the floor.

I am starting to prepare my talk today and will eventually also use my research to write posts for VC. Your input is most welcome!

The reason for my personal choice is the number of people which could be affected in case Vesuv (german name version) blows up in a big eruption and the effects this could have are very well documented with the eruption of 79 which, as we all know, destroyed Pompei and Herculaneum. Recently cientists found an even bigger eruption 3800 years ago which harmed people living in the Bronze Age called the Avellino eruption.

Next on the list could be Nyiaragongo in the Democratic Republic of Congo. It is so dangerous because its lava is so fluid and the lava flows can reach a speed of 100km/h. Absolutely no chance to outrun such a flow!.

Another candidate for a possibly very dangerous eruption to me is Mount Ranier. 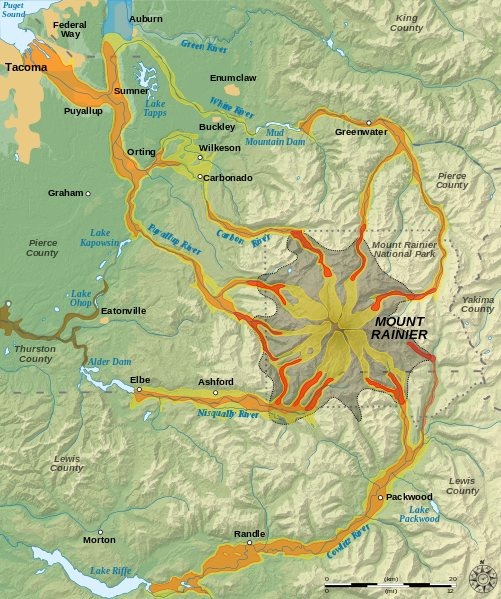 And this hazard map shows exactly why Mount Ranier could one day again bring devastation to the surrounding countryside most especially to the cities Tocoma and  Seattle. 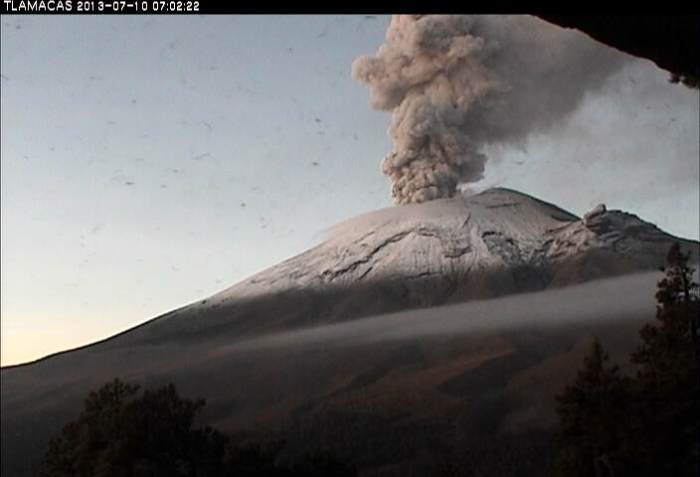 Webcam screenshot by me.

Popocatépetl  is erupting right now. Not a huge big explosive event but still. Mexico City is close and millions of people are living in that area. If you wanna watch what is going on at the moment, best use this link. http://www.malinpebbles.com/Images/FOTOS/Meine-Webcam-Seiten/pubweb/CuS-Amerika.htm#MX

Merapi last erupted on 2010 and many of us tried to follow the event using webcams and discussing on Erik Klemettis blog Eruptions. But it is by far not the only dangerous volcano in Indonesia. Bromo comes to mind and many others.

Taal in the Philipines is not to be underestimated. GeoLurking wrote about it.

In South and Middle America quite some beasts can be found too. Galeras or Nevado del Ruiz or Colima in Mexico.

No candidates for really dangerous volcanoes are Yellowstone or Kilauea to me. Yellowstone.. because ,yes it was a supervolcano but nothing points to another really huge eruption in the near future as Erik often explained. And the surrounding countryside is not heavily populated.

Hawaii´s Kilauea. I am sorry to point out, if someone builds a new house on a lava flow that is not even 100 years old. Loosing said house because of a new flow cannot really come as a big surprise. The vents are fascinating for certain but i would not consider the volcano one of the most dangerous ones in the world.

I know little about volcanoes in Japan. This list is not about the most active volcanoes at the very moment, because Sakurajima would most   likely be top ranked,  but about those which might cause a lot of harm one day in the future.

127 thoughts on “The most dangerous volcanoes of the world. Your choices are ?”