This GOES-13 image captures the ash plume from Puyehe Cordón-Calle on 6 June 2011. Note how the plume changes direction as it meets a weather system. (NOAA)
(click on the images to see a larger version)

What follows is a very rough guide to the satellites and their systems that routinely feature in volcano-watching. For anyone interested in learning more, most of the systems have dedicated websites with a lot more information. Just Google the name of the system/satellite, or search through the NASA, NOAA or USGS main sites (way too may links to list!).

GOES: surveillance from on high

Of the geosynchronous satellites it is the National Oceanic and Atmospheric Administration’s GOES (Geostationary Operational Environmental Satellite) meteorological system that is the most often used to aid volcano monitoring. The first GOES satellite was launched in 1975, and today there are four US-operated platforms in orbit. Two are primary satellites (GOES-East and GOES-West) that provide coverage of North America, while GOES-South covers South America. A fourth satellite is held in orbital storage, and is brought online to cover any problems with the others, or to add additional data during extreme weather events. The GOES network is complemented by other weather satellites, such as the Japanese MTSAT and European METEOSAT programmes, to provide global coverage.

Due to the high altitude of the GOES satellite it has no value for close monitoring of the volcanoes themselves, but it is a useful tool for tracking ash plumes.

Also falling under NOAA’s purview (in partnership with the European EUMETSAT), and the true successor to that ground-breaking TIROS-1 mission, is the POES (Polar-orbiting Operational Environmental Satellite) programme. Currently there are six satellites (NOAA-15, -16, -18 and -19, and the European METOP-A and -B) in the system, two of which are the primary platforms. The constellation’s main mission is to aid weather forecasting, but the sensors can also be used to monitor volcanic eruptions.

For this the Advanced Very High-Resolution Radiometer is the most useful sensor. AVHRR is a scanning radiation-detection imager operating in six channels in its current AVHRR/3 version. It is used by day and night to map clouds, snow, ice, land-water boundaries and sea surface temperature. Examining images from the various frequency bands allows volcanic ash plumes to be easily discriminated from clouds

Perhaps the best known of the Earth imaging systems is Landsat, which began life as the Earth Resources Technology Satellite, launched on 23 July 1972. It carried the MSS (multi-spectral scanner) sensor and produced 185 x 185 km images in three spectral bands. It was renamed Landsat in 1975, and its successes led to a series of eight satellites being launched (although Landsat 6 failed to reach orbit).

Currently there are two Landsat satellites in operation, numbers 7 and 8 (see below). Landsat 7 was launched on 15 April 1999 and its main sensor is the ETM+ (Enhanced Thematic Mapper Plus), offering seven channels including a thermal (heat) channel.

Some of the most eye-wateringly stunning imagery from space in recent times has been provided by the Advanced Land Imager (ALI) sensor flying on NASA’s Earth Observing-1 satellite. EO-1 was launched on 21 November 2000 as part of NASA’s New Millennium Project. It was intended as an experimental ‘proof-of-concept’ platform for several advanced sensors, including ALI and the Hyperion hyperspectral imager, and its mission was originally expected to only last a year. However, the project was so successful that EO-1’s mission has been extended and it continues to provide imagery 12 years later.

Like most spaceborne imaging sensors ALI samples its imagery in various bands of the frequency spectrum, which can be analysed separately or combined to create a variety of image types. Whereas earlier sensors such as ETM+ work on a ‘whisk broom’ principle, producing swathe images by scanning a mirror across the satellite’s path to build up an image on a single sensor, ALI uses the ‘push-broom’ concept, in which a series of small, fixed sensors produce a single swathe image as the satellite progresses. The principal advantage is increased reliability due to a lack of moving parts.

Smoke and ash can be seen in this OLI image of the recent activity at Veniaminof volcano in Alaska, 25 July 2013. (USGS)

Building on earlier Landsat experience and drawing on technology from EO-1, NASA has recently brought Landsat 8 online. Developed under the Landsat Data Continuity Mission and launched on 11 February 2013, the new satellite was renamed as Landsat 8 on 30 May, the date on which its operational management was handed over to the US Geological Service, which is the agency responsible for the Landsat mission. With the successful implementation of Landsat 8 in operation, Landsat 5 was switched off in June this year.

Landsat 8’s primary sensors are the nine-band OLI (Operational Land Imager) and the two-band TIRS (Thermal Infrared Sensor). OLI is based on the ALI flying aboard EO-1, and is delivering superb imagery. It collects imagery in nine bands, adding a deep blue coastal/aerosol band and a cirrus band to the seven bands already offered by ALI. There are two SWIR (short-wavelength infrared) bands and a single NIR (near infrared) band, as well as red, green and blue visible bands. The latter can be combined to create a visible image (just as the red, green and blue dots on a TV screen combine). Another source of a visible image is the Panchromatic band that covers the entire visible spectrum with the exceptional resolution of 15 metres.

Meanwhile, the TIRS system looks at thermal signatures (i.e. heat) in two LWIR (long-wavelength IR) bands. The system uses two bands to help overcome distortions caused by the atmosphere. Systems such as TIRS, and other thermal detectors flying on other satellites, are very useful for discovering thermal anomalies at volcanoes, which are often an indicator of volcanic activity.

Under the grand title of Earth Observing System (EOS), NASA brought together a range of spaceborne sensors into a single generic programme that aimed to leverage their different capabilities, and to promote cross-matching and data fusion across the frequency spectrum. As well as using existing satellites, a number of new satellites have been deployed under the broad aegis of EOS. 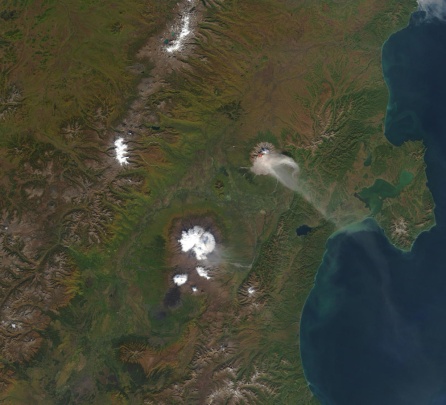 Shiveluch imaged by the MODIS sensor on 17 September 2002. As well as the imagery, there is a red dot at the volcano indicating a thermal anomaly. (NASA)

First of the new platforms, and ‘flagship’ of the EOS constellation, is Terra, which was launched on 18 December 1999. Among its sensors are two that are well known to volcano-watchers: ASTER and MODIS. The satellite was initially known as EOS AM-1, not on account of the initial letters of its primary sensors, but because it is the ‘morning’ satellite (see below).

MODIS (Moderate-resolution Imaging Spectro-radiometer) is a multi-purpose sensor that records in 36 slices of the spectrum across a wide swathe below the satellite. Its resolution varies between 250 and 1000 metres (according to frequency band) and is used primarily for a ‘big picture’ view.

On the other hand, ASTER (Advanced Spaceborne Thermal Emission and Reflection Radiometer) offers much higher image resolution (down to 15 metres in the visible bands) across 15 spectral bands, including five in the LWIR range for heat imaging. It complements MODIS by offering a better ‘close look’ capability.

A vast bank of high-resolution ASTER images (dating from 2000 and in visible, NIR, SWIR and thermal bands) for virtually every volcano in the world can be accessed through this portal: http://ava.jpl.nasa.gov/group.php

Aqua and Aura: take the A-Train

In this context the ‘A-Train’ has nothing to do with the New York subway, or even Duke Ellington, but rather it is a multi-national convoy of EOS satellites in frozen, sun-synchronous orbits that contains two of the most important platforms for observing volcanoes: Aqua and Aura.

Altogether, there are five satellites in the ‘A-train’ (with PARASOL orbiting below, and the carbon-monitoring OCO-2 to join the train in 2014), all following a similar path over the earth a few minutes apart. Their sensors cover a number of parameters and record their results from the same place and near-synchronously, allowing the direct and near-contemporaneous comparison and fusion of data across the suite of sensors. The convoy takes its name from being the ‘Afternoon train’ – the satellites pass north over the equator at around 1.30 pm in solar time, that is the time local to their position above the earth (and conversely pass south over the equator at 1.30 am local time). 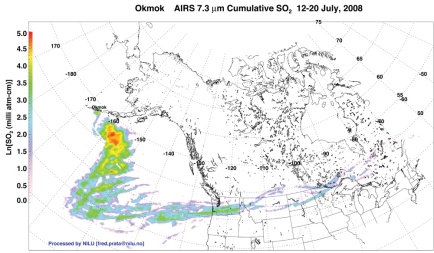 Aqua (EOS PM-1, launched 4 May 2002) carries MODIS, and is broadly similar in its function and capabilities to Terra (although it lacks the ASTER ‘close-look’ sensor), with the exception of its timing. Aqua is the ‘afternoon’ satellite, whereas Terra takes the ‘morning’ shift. Among the sensors carried by Aqua is the AIRS (Airborne Infrared Sounder) that, among other things, can be used to track sulfur dioxide clouds.

Aura (EOS CH-1, launched 15 July 2004) has different tasks. Among its sensors is the Ozone Measuring Instrument (OMI), the principal duty of which is to map ozone in the atmosphere. However, for volcano-watching OMI is also a very useful tool for tracking volcanic emissions. Like AIRS, it can track clouds of aerosols and also sulfur dioxide, and is very valuable in monitoring ash clouds that threaten air traffic. 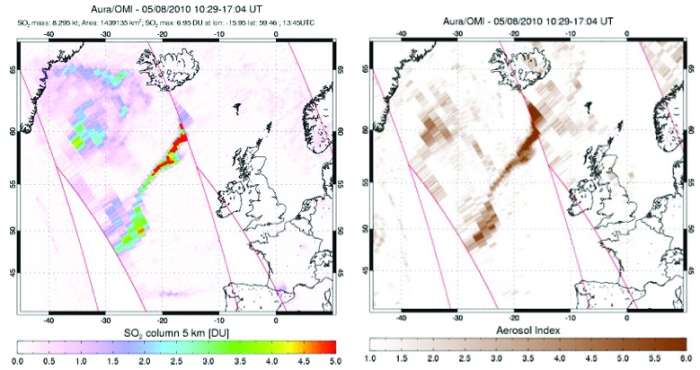 The OMI instrument on Aura can trace both sulfur dioxide (left) and aerosols (right) in the atmosphere. These simultaneous traces were recorded on 8 May 2010 during the Eyjafjallajökull eruption. (NASA)

OMI and AIRS are the current incarnations of a programme that has been ongoing since the Nimbus 7 satellite launched on 24 October 1978 with the Total Ozone Mapping Spectrometer (TOMS) aboard. The TOMS ozone mission, and its valuable volcanic ash-monitoring by-product, ended in 2005. 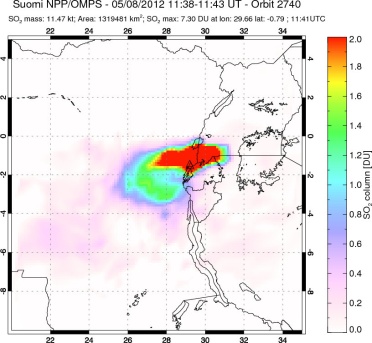 This was the first useable sulfur dioxide trace from the OMPS sensor aboard the new Suomi NPP satellite. Nyiragongo, 8 May 2012. (NASA)

Aqua and Aura now have a new partner in the ozone-monitoring mission in the form of the Suomi NPP (National Polar-orbiting Partnership, launched 28 October 2011) satellite, which carries a system similar to OMI known as OMPS (Ozone Mapping and Profiling Suite). The satellite also carries the VIIRS (Visible Infrared Imaging Radiometer Suite) 22-band sensor, which is similar in capability to MODIS.

Suomi NPP was launched as the pathfinder for the NPOESS (National Polar-orbiting Operational Environmental Satellite System) that would replace both NOAA’s POES system and the military meteorological satellites. By the time that Suomi NPP launched in 2011 NPOESS had already been cancelled, to be restructured as the JPSS (Joint Polar Satellite System), with the first of two new satellites (JPSS-1) to be launched in early 2017. Primary mission data reception stations for JPSS will be located on Svalbard and at McMurdo Sound in Antarctica.

A good pair of eyes

Of course, there is one other highly important ‘sensor system’ watching volcanoes from space – in the form of astronauts/cosmonauts! Armed with digital cameras, humans in space have captured some of the clearest and most revealing overhead images of volcanoes. Today the principal ‘satellite’ carrying the ‘human sensor systems’ is the International Space Station. It orbits the Earth every hour and a half at an inclination of 51.6° and at an altitude of just over 400 kilometres (although that is decaying at the rate of around a kilometre every fortnight).

Shiveluch again, this time photographed from the International Space Station on 10 July 2007. (NASA)