Newly released picture from todays over-fliight of the Kverkfjöll volcano showing the result of the phreatic detonation. Picture from Almannavarnir.

Yesterday or the day before Kverkfjöll suffered a phreatic detonation, or a phreatomagmatic event. As you all know there have been an increase in deep earthquakes in the area, a sign of increased magmatic activity at depth. There is currently no harmonic tremor present at Kverkfjöll, but as a result a minor Jökulhlaup has started from the volcano, probably due to increased hydrothermal activity caused by influx of new magma.

It remains yet to be seen if this will lead to a full eruption in the hours or days to come. It is quite possible that the stress release caused by the Jökulhlaup might increase the likelihood of a real eruption.

If an eruption happens it will most likely be a smaller one. Probably not a higher VEI than a maximum of VEI-3 from this 1784 meters high mountain, but a smaller eruption is more likely. Historically Kverkfjöll have suffered at least two caldera forming events. The last confirmed eruption at Kverkfjöll happened on the 23rd of May 1968, and one of the caldera formation might have taken place 7000 to 9000 years ago when Kverkfjöll suffered the two latest large eruptions. The total area of the two calderas cover a 8 by 5 kilometer elipsoid.

The Jökulhlaup has caused an unusual increase in the water at the Volgá river running from Kverkfjöll and the caldera cauldron containing hydrothermically warmed water is draining. Volgá empties into Jökulsá á Fjöllum river. A further increase in water level is expected. Almannavarnir continous to monitor the situation and will post new bulletins as needed.

Image of the unfolding Jökulhlaup from Kverkfjöll. Picture from Almannavarnir.

Thanks to Islander who brought this to my attention, and who helped with gathering of additional information and who translated Icelandic sources. More information will follow as soon as it is published.

The usual stone tablet can be found at https://www.facebook.com/Almannavarnir 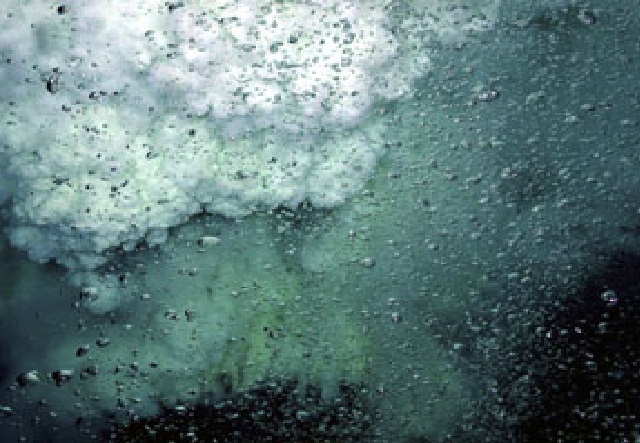 Kick’Em Jenny in all her gassy glory.

Since we have had both lava cakes (Spica) and Flaming Volcano drinks on our Friday posts commenter Lughduniense suggested that we should have a competition of sorts where we posted recipes in the comment field during the Friday posts. Next week we publish the winning recipe and at the end of the year we have a lot of nice dishes for a Volcanic New Years Eve Supper. Of course all of it should be themed by our favorite volcanoes.

To kick things off here is my suggested dish based on the rather Caribbean flavored sub-marine volcano of Kick’Em Jenny.

0.5 kg of pork fillet
0.3 kg of really spicy sausages (high on meat content)
0.3 kg of peeled shrimp
4 tomatoes
1-2 Habañero peppers
1-2 handfulls of peanuts (depending on size of hands)
1-5 pieces of garlic (use according to taste, more is better)
1-2 stalks of celery
1 bell pepper
1 onion
1 item of beef broth or bouillon, cube variety works fine
Dill, either frozen or fresh
Olive oil or rapeseed oil and a tad of butter
White wine, red wine or beer, only use one of the options

Serves with rice, beans or potato

First you need to know what you are going to serve to drink to the Gumbo. It goes equally well with either white or red wine, as well as beer. You should dilute the soup base with the same thing that you end up drinking with the meal, this way the food and the drinks will match perfectly. This works with other dishes too of course.

Start by grinding the peanuts into flour; use a coffee grinder or a blender. In the end you should have 1 to 2 deciliters of peanut flour. If you can’t get really fresh peanuts you should use dry roasted peanuts. The stuff you buy from the Health Food shelf will most likely be mildewed and might cause kidney or liver failure, never eat those. Grind until it is as fine as baking flour. Put in a bowl on the side.

Blend tomatoes, bell pepper, Habañeros, celery and the garlic. Regulate how strong it is by using one or two peppers, if you want it even weaker remove the seeds (I use two with seeds, but it is you who are going to eat) Start with giving the garlic a couple of turns in the blender. When it is creamy and there are no chunks it is done. Pour this into a big enough soup kettle then add the beef broth or bouillon and a dollop of butter and a small amount of olive oil. Heat slowly until it cooks.

Chop up the pork into inch sized cubes. Fry this together with the onion in oil, start by frying the onion for a couple of minutes before adding the pork. Do not fry the pork until it is fried through, then it will get rather stringy.

As the soup base is near cooking it is time to put in the peanut flour. Do not worry about using to little or too much, this will even out when we pour in the wine or beer into the kettle later. As you stir out the peanut butter you will get a lovely roux out of it automatically, and the flavor is much better than if you do it the regular way with wheat flour and butter. Stir it slowly; it should dissolve easily into the soup base. As you start to reach the boiling point the soup will start to thicken, now is the time to add the fried pork and onion.

Wait until the Gumbo start to boil. Now it is time to pour in either wine or beer, do not put in too much, it is better to add as you go. Remember, a Gumbo should be rather on the thick side. Let it simmer for 20 minutes.

Add the chopped sausages and let simmer for half an hour. Taste the Gumbo and add finely cut dill, salt and regular black pepper to taste. Drop down the shrimps and stir, wait 5 more minutes and serve.

If you have any, serve it with garlic bread.

3 points for each volcano … happy Friday!

No 1 – It would be apt if the 2010 debris flow had been started by a goat … but I doubt it! SOLVED Capricorn Volcano

No 2 – The ‘paranormal power’ of this sub glacial mound is alleged to focus the mind. SOLVED Pyramid Mountain

No 3 – It is located within a dramatic leaden landscape. HINT: Anagram letters are in bold! SOLVED Maipo sited in the ancient Diamante Caldera

No 4 – According to Ms. Heyer, he was William’s number one best friend. SOLVED Raoul Island

No 5 – First or second … either way you could win the bet! HINT: It is the name of a popular bet on the horses. SOLVED Forecast Seamount

No 7 – Scene of a hilarious attempted short cut, subsequently publicised in over 150 countries. SOLVED Guallatiri

No 8 –153 398 47 … only teasing! HINT: As usual put letters to the numbers (three separate words) and solve the riddle!  SOLVED White Horse Bluff