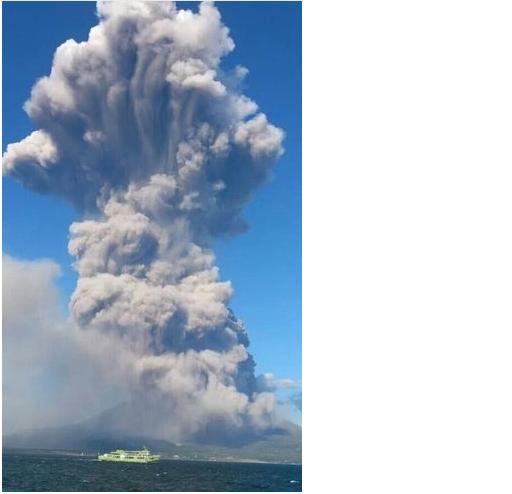 So Sakura-jima has had a busy week, she’s always busy; but produced a 5km plume on Sunday the 18th.

First some essential back ground reading from our very own Karenz: https://volcanocafe.wordpress.com/2012/10/31/sakura-jima-why-is-she-nearly-always-erupting/

Here is a list of the 600+ (!) eruptions of Sakura-jima this year from the Japan Meteorological Agency (JMA):

Sakurajima on the BBC News Page.

Found by Mike Ross ;with a hat-tip to Boris B:

There is a very good archive on the page Karen linked to:

Translate the page, set date on the right, chose an image from the thumbnails below. Then click auto play (centre button below webcam). It will show a pic for every minute / 1 per sec. The eruption started at 16.30 local time.

I am not sure if the translated page comes over properly:

With 600+ eruptions already this year Sakura-jima is worth watching and well monitored.

Here’s a selection of cameras courtesy of Pyter, Renato Rio and Mike Ross:

And to round off an interesting comment and link from Cbus20122:

I think the worry you would have with SakuraJima is if it ever becomes blocked up for a significant portion of time, then you start to worry about a legitimate pressure buildup in that system.

Apparently the center of the Aira Caldera system has been seeing inflation since roughly 2011, so that could possibly explain the reasoning behind the increased activity.

The question is how much the vulcanian activity has contributed towards depressurizing the overall system. From what I’ve heard, the cumulative VEI release of the SakuraJima eruptions over the years is actually incredibly small, although that doesn’t really show how much pressure has been relieved by the activity. I would believe that SakuraJima has actually benefited from what seems to be a constant flow of magma, since it’s kept the piping hot and moving, instead of allowing the conduits time to cool, henceforth preventing depressurization (although this is just conjecture).

With that said, I personally believe that most of the larger eruptions will simply occur when a big wad of magma ascends from Aira’s primary magma chamber regardless of how open the system is or isn’t. The VEI-4 1914 eruption had a lot of precursor earthquakes, and similar to St. Helens, the volcano started to bulge on it’s flank and inflate incredibly rapidly in the days prior to the eruption.

Finally, there seems to be some evidence to believe that the volcanoes in the Kagoshima Graben are still in the process of becoming more active, as the delamination process below the Kagoshima Graben continues. I can’t find the source, but supposedly the sinking rate of the graben has actually increased over the course of the last 10,000 years.

“Considering the estimated volume increase at the inﬂation sources, it is indicated that the total of about 1.2[1] x 10^8 m^3 magma is inferred to have additionally stored beneath Aira caldera during the period from 1991 to 2012. The ground uplift around the northern part of Sakurajima at the time of December 2012 caused by the progressing magma storage recovers and further exceeds the height level in around 1973, when the intense summit eruptions during the 1970s and the 1980s started. These results suggest the immanent potential of the next intensive eruptive activity of this volcano.”

Cbus provided this link to a useful, not too technical PDF:

And everyone’s favourite Volcanologist Erik Klemmeti had this to say: