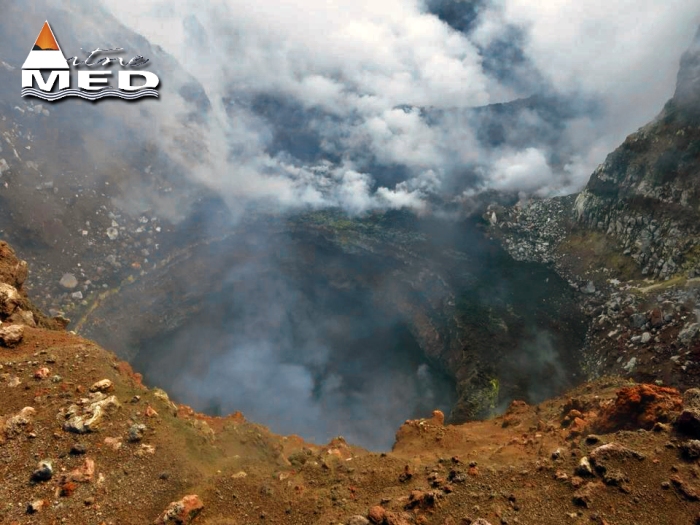 Photograph by Marco Tomasello. The new pit-crater at Bocca Nuova. Renewed activity at the craters, or even formation of a new crater, at Etna often starts with the formation of a pit-crater.

The big talkie during the weekend has without a shadow of a doubt been Etnas comeback. And to top it off one of Tondanos subsidiary volcanoes had an eruption almost exactly a year after the last time I wrote about the volcano.

The Sicilian giant is one of those volcanoes I rarely write about since it is so complex that I find the task rather daunting. So, to get things straight I went and asked Dr Boris Behncke from INGV a few questions and made sure to read up on the INGV bulletins, any mistakes are completely mine.

Etna came back to life on the 3rd of September when it ejected cold rock and ash as it cleared the throat of the New Southeast Crater (NSEC). On the 7th weak strombolian activity started with the typical fiery cascades reaching about 40 meters above the crater of the NSEC. At the same time eruptive activity occurred at the Bocca Nuova. When that crater later was examined it became apparent that a part of the crater floor had fallen in on itself. It is unclear if this happened due to magma withdrawal or due to clearing of the vent for possible future eruptive behavior.

The strombolian action has diminished from onset of the eruption, and is today greatly diminished. According to Dr Behncke the current eruption is not out of the ordinary and is not a cause for any alarm. 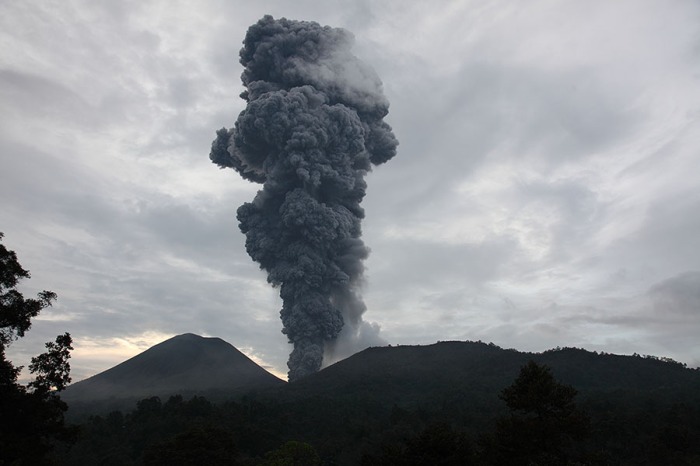 Photography by Dr. Richard Roscoe and duly borrowed from his fantastic site Photovolcanica. This picture is from an eruptive phase in june 2012. Please notice the location of the Tompaluan vent between the volcanoes of Lokon and Empung.

This time it is a subsidiary volcano named Lokon-Empung that is erupting. It is a twin volcano separated by a mere 2.5 kilometers. And to be quite honest it is hard to say which of them is actually erupting since the erupting vent, Tompaluan is situated perfectly centered in the saddle in between Lokon and Empung.

The current eruptive phase started in February 2011 and the eruption has since then been more or less continuous with frequent ash pillars reaching heights up towards 5000 meters.

During the weekend an eruptive column rose to the height of 4 000 meters. Often Tompaluan erupts together with another volcano named Soputan, and as late as in June a prolonged seismic event occurred at Soputan, but without any eruption having started as of now.

If anyone wants a deeper understanding of this highly fascinating volcano I recommend my former post on the subject:

Both Etna and Tondano are old and very imposing volcanoes. Tondano is even in the rather hyperbolically named category of supervolcanoes. The important lesson here is that even these true giants in the world of volcanoes are still doing what giants most often do, namely having small eruptions. In the hunt for the; “Oh my God! We are all going to die” sensationalism we lose track of the fact that these volcanoes have mainly small unassuming eruptions.

Yes it is true that Tondano had a VEI-8 eruption 2 million years ago, and that has had one VEI-7 eruption and quite a few VEI-6 eruptions, but still the mind-boggling majority of the eruptions have been small and unassuming. Since Tondano seems to have been very prolific in its number of eruptions there has most likely been somewhere around 100 000 eruptions that is not worth writing home about from this volcano. Imagine, a few thousand small eruptions per every large one (VEI-6 and upwards).

149 thoughts on “Battle of the Giants: Etna VS Tondano”