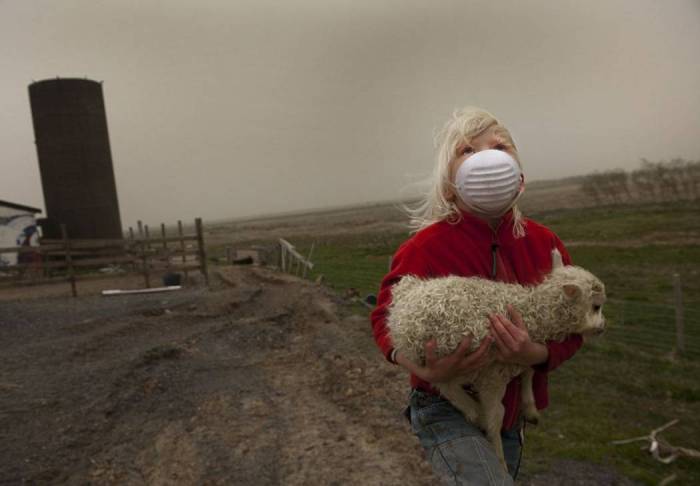 Volcanoes and sheep, kind of sums up Volcanocafé in one image. The child is saving lambs from the ash of Grimsvötn 2011.

The last couple of days I have been thinking about what to write today, the day that Volcanocafé becomes 2 years old.

It is a great place for learning, there is not a single day in which I do not learn something new and wondrous. I get to read loads of fantastic articles from people from all parts of the world. In our archive we have something about almost everything.

In the end though, this is more than that, it is about the people in here. The people who week after week sit and write wonderful ruminations in the comment field while waiting for the next interesting eruption.

It is also about the nuttery. If you have not noticed it we are truly bonkers for being a serious popular scientific community. During the last couple of years we have had the night of the flying sheep, and the imaginary bar where everyone are welcome during the weekends, and now we have the Inappropriate Tomato of Surtsey.

I am looking forward to the coming year, there are things in the making that I am very much looking forward to, but the idea is not mine, so like the terrible tease I am, you will all have to wait for that. Just know that the idea is one that is turning me into a child seeing wonders shining like stars in the future.

Torre del Filoso is no more, during the last Paroxysm Etna finally did away with the last vestigial part of the building. Torre del Filosofo was originally a hill, a hill now passed away. Photgrapher Dr Boris Behncke.

As usual there are two points to be had before I append the clues, and one after. On the score board Evan is still in the lead, but KarenZ is giving fine chase, and at the third spot there are no less than 3 hard boiled riddle-solvers. I would like to say that this round of riddles will be running to the end of the year. After that a new round will begin.

I added lots of caviar for optic reasons, normally we eat them with lots less on top.

Mix the hand warm milk with the sugar, one spoonfull of the flour and the spices and let it rest for 20 minutes. The add the rest of the flour and the eggs and stir. Melt the butter till it is a little bit brown and mix into the dough. The whole dough should be somewhat liquid.

Heat a pan and add oil ( i also add a few drops of tasty sesame oil for taste reasons) Bake the Blinis. Serve with sour creme and caviar. The Caviar i normally use originates from trout, salmon trout and samlet.

Besides the time it takes for the yeast to rest and start growing, the whole recipe is really easy and needs 5 mins  to prepare.

Other Blini recipes an be found here.