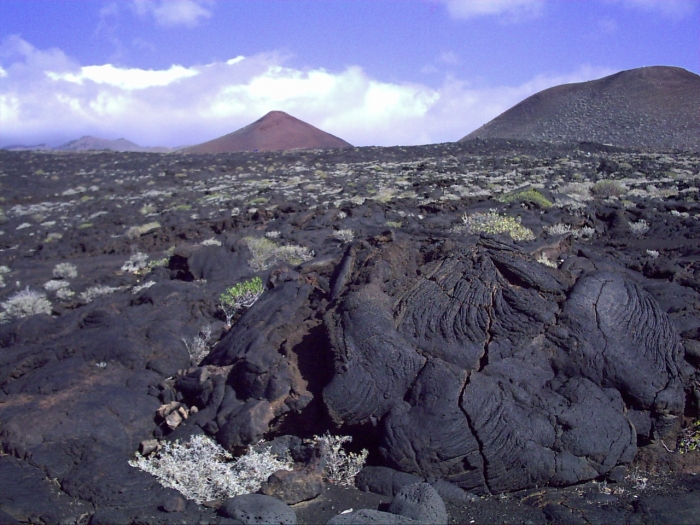 Lava field on El Hierro with a couple of volcanic cones in the background.

As Christmas moves towards Boxing Day it looks more and more as the volcano of Tanganasoga on the island of El Hierro in the Spanish Canary Islands is closing in on a new eruption. Since the last eruption the seismic activity has continued in a subdued fashion, but not in a way that really was pointing towards a new eruption starting. Well, at least up until the last few days.

I remember quite well the run up to the last eruption, it started with a large earthquake swarm as magma from deep down either formed or moved up from depth via the mantle plume. This swarm continued for quite a while and waxed and waned for months until harmonic tremor at low levels set in. The harmonic tremor slowly built in strength as magma moved into the system and pressurized it.

Suddenly a conduit opened up that lead from the central magma reservoir under Tanganasoga. The conduit was deep and followed roughly the southern fissure line, via the village of La Restinga out into the ocean where it burst forth from a new vent that we named Bob after a character in the TV series The Black Adder. As the conduit opened up the harmonic tremor went quite literally off the chart within just a few seconds. Between the earthquake swarm and the conduit opening up there was an episode of significant uplift. 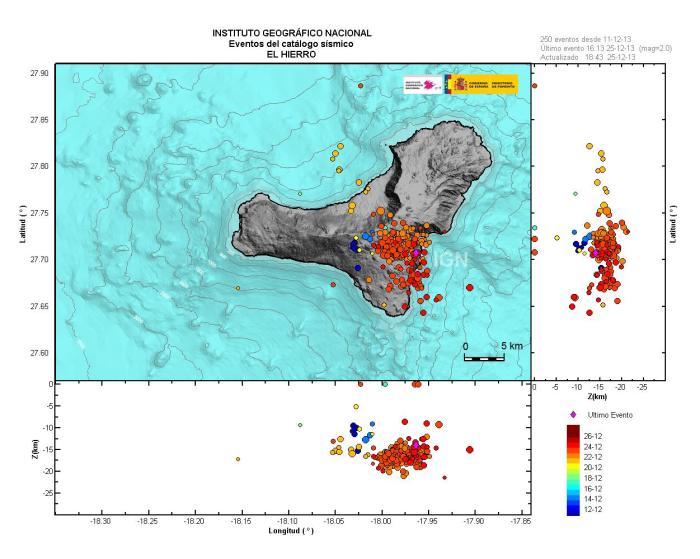 The location of the latest swarm, reaching from Tanganasoga out towards the eastern side of the fissure swarm leading to Bob.

As the eruption out in the ocean ended no significant deflation was noticed, a sign that the system was still fully loaded with magma. This will most likely explain a few things that we see now.

A few days ago an earthquake swarm started under El Hierro, it is so far the largest swarm since March 2013. That swarm was significantly larger, but did not in and of itself entail any significant risk for a return of eruptive activity. Most likely the March swarm was internal movement of magma in the system.

After the current swarm a few other signs started to show. One was the onset of inflation, and the second was a steady rise in Radon being emitted from the bedrock of the island. Currently the inflation ranges from 30mm to 50mm in the affected areas, with the peak following the same fissure line that leads towards Bob. Also the current level of Radon is now ten times higher than the baseline level at El Hierro, with a current reading at 2250Bq/m3. I will get back to the Radon at the end of this piece.

What differs are the shape of the earthquakes, this time they have a distinct signature that has 3 significant indications. I will here describe the earthquake shown below. It has a magmatic component, and on the drumplot we see that it is a Long Period event so it is pressurizing the system. On top of that it has a very interesting coda, as it progresses the frequency starts to drop dramatically, and that is a sure sign of increased volume, ie that it is opening up a new conduit, sill or dyke. This was a very telltale earthquake that proved that new magma moving into the system. 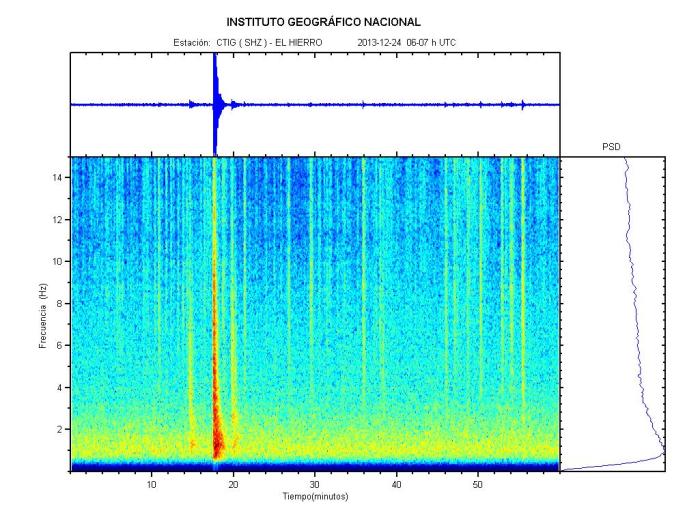 Notice how the frequency rapidly shifts towards a lower frequncy, this is dopler shift due to a pressure drop due to a volume increase. This only happens if there is fluid medium filling a system. 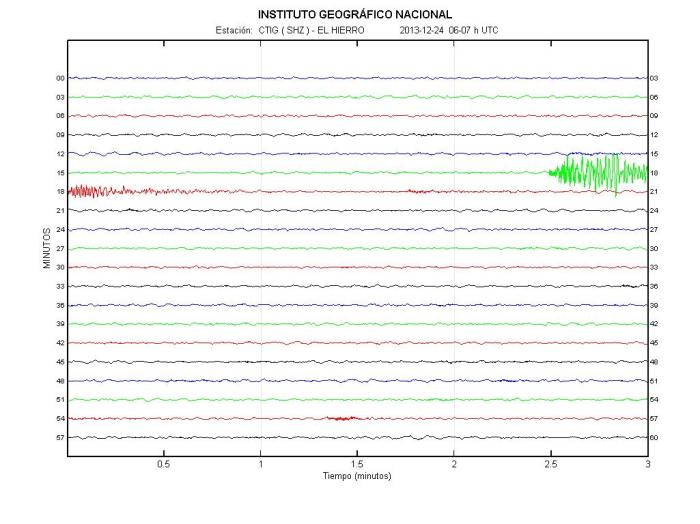 After that earthquake harmonic tremor slowly started to creep into the picture, so far it has increased slowly but steadily with a couple of highs and lows.

It is interesting that the pattern is repeating itself so much for the volcano, only real difference is that the pattern is progressing faster, and that it showed quite fewer earthquakes for the other signs to show up. This is most likely due to the fact that the bulk of the eruptible magma that arrived during the previous eruption still is down there in the magmatic reservoir of the Tanganasoga volcano.

This is the highest level so far of harmonic tremor.

If the uplift continues, the radon stays at the extremely elevated levels, and the harmonic tremor continues to increase, there will most likely be an eruption. If so it could happen anytime from within a few hours to a few weeks. It is currently hard to say what will happen, where it will happen and when it will happen. I do though not think an additional earthquake swarm is necessary for an eruption to start, since there is already a lot of magma in the volcanic system.

Currently it looks like the most probable spot, if an eruption occurs, is along the fissure line leading from Tanganasoga past Bob. I guess that an eruption out in the ocean is more likely, but that it probably will be closer to land than the last one. There seems to be a bit of evidence that the eruptions along this fissure swarm has moved progressively closer to land. I would though like to point out that there is a risk that an eruption could take place on land, and in that case La Restinga might be in danger. 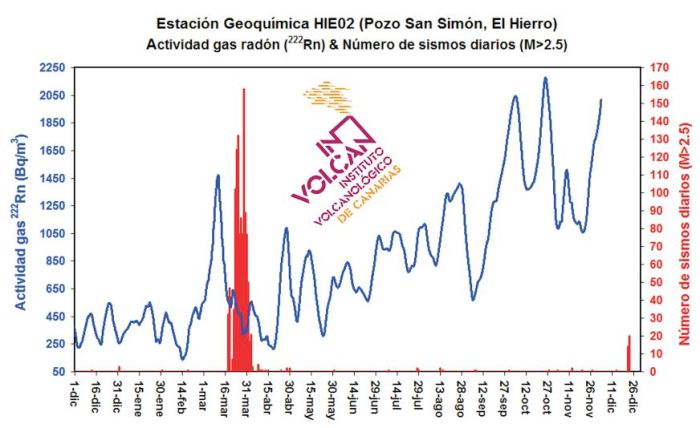 Notice that the radon count increased before the March 2013 earthquake swarm, and that it later fell down, and then it started to increase steadily during an almost aseismic phase leading up to the current levels that are rather extreme. This is indicative of continued magmatic movement into the system, and upwards towards the surface within the system.

Radon is a heavy radioactive gas that causes an assortment of cancers if inhaled in large doses. It has a short half-life and is created as uranium or thorium decays. The most stable isotope of Radon has a half-life of 3.8 days, but most other isotopes have a much shorter half-life time. This means that high concentrations of radon is almost exclusively found near natural uranium ore deposits.

The only other natural place to find elevated levels of radon is around volcanoes that are receiving fresh magma from a very deep uranium or thorium rich source, such as the deeper parts of the mantle. We already know that the mantleplume under the Canary Islands reach at least 4 000 kilometers down. So, as fresh magma moves up from the depth it will cause a large increase in thorium and uranium in the volcanic system, and as they decay radon-gas will be released and as it seeps out of the ground the levels will rise as the magma gets closer to the surface. As an eruption ends, or if the rise of the magma halts the levels will quickly start to fall towards normal levels. Remember that the ground level was down at 250Bq/m3 after the last eruption as this latest magma moved into the system.

Now, how bad is radon for you? Well, radon is a heavily regulated gas. A residence home is allowed 200Bq/m3, an underground mine is allowed 1300Bq/m3, a basement work area is allowed 400Bq/m3 and a nuclear reactor is allowed to have a level of only 300Bq/m3. The current level of 2250Bq/m3 is really high.

I started my career as a nuclear physicist before I moved on towards being some sort of geophysicist. Take this into account when reading this. Prolonged exposure at those levels is dangerous for your health. If you live on El Hierro you should avoid being in a basement, and you should open the basement up so that air can move freely in and out so the gas does not pool in it. You should keep the windows in the house as open as possible at all times. If you live in a house containing more than one storey you should sleep as high up as possible. Since the gas is very heavy compared to regular air it will pool in the lower places of the building.

In an unaired basement the level of pooled up radon might easily reach tens of thousands, if not hundreds of thousands of Bq/m3. At those levels you can be in serious health problems in a very short time. Personally I would not spend even a second in a basement that might contain pooled radon gas. After all, getting lung, lymphatic, pancreatic, bone marrow and assorted other cancers and or leukemia is an over-rated experience that should be avoided.

Today, Harrie brought attention to the spectral traces from CTAB. Looking at it, and piecing together the last couple of days plots, you get what appears to be the onset of a tremor event.

This is not too dissimilar to the plot on CHIE (located in the La Playa scarp area) when the vent (Bob) south of La Restinga began. I don’t know the exact location of Station CTAB, but it is one of the augmented stations that IGN put in back in the early days of the seismic crisis. If this is the signature of degassing magma, it is likely near the station since it is most prevalent there.

Update2, KarenZ located the station graphic. CTAB is closest to El Golfo. The interesting part of this is that there were indications of a lesser reported 2nd vent offshore in this area. I believe that the survey ship even noticed it. (this is based on recollect and may be inaccurate).

The location of CTAB:

Correction, evidently KarenZ caught the first spectral plot showing what it likely tremor. (December 26, 2013 at 00:11 post) I didn’t catch that until later. (sorry).

214 thoughts on “El Hierro – Signs of a possible coming eruption”