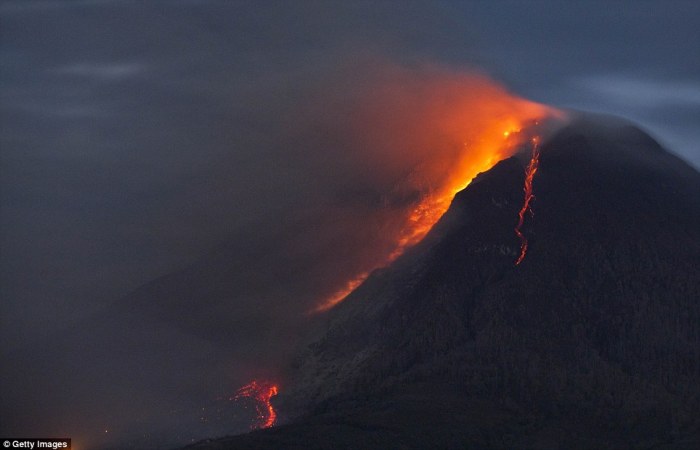 Lava and incandescent material after a pyroclastic flow. Getty Images.

We often have a tendency to believe that an eruption will come quickly after seeing an intrusion take place. Of course this is normally not the case, something that Sinabung has proven quite well. As the local Indonesian authorities are starting to issue warnings that Sinabung might be getting closer to a major eruption I thought we should take time to look at what has gone on for the last few years, and what a “major eruption” might entail at Sinabung.

Mount Sinabung is situated about 40 kilometers from the Toba system, and even if it feeds from the same deep magmatic source it does not share the same magmatic reservoir as its grander neighbor. The location at the Sunda Arc tends to give sticky magma with a capacity to build up pressure in the system, that withstanding, most eruptions from the nearby volcanoes are not big. Previously Sinabung has erupted mainly andesite to dacite. 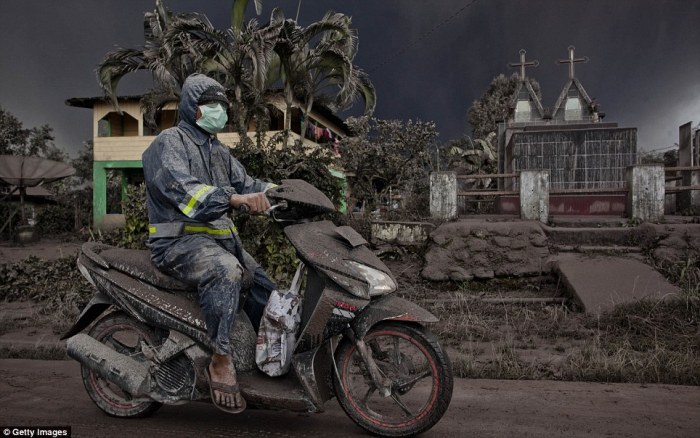 Evacuation is straining the densest populated country on the planet. Getty Images.

The only activity in written record is an episode of unrest with earthquakes and solfataric activity in the currently active crater in 1912. This was the first recorded activity in the volcano since a minor eruption believed to have occurred in the year 1600. It is quite possible that the 1912 activity might have been the result of a reactivating magmatic intrusion. If so, it might have been what set into motion what we are seeing today, and given the time frame it would mean that there is a reservoir of evolved magma residing in the magmatic system.

Even though there might have been further intrusions after 1912 they left no trace after them.

Phreatic detonations started on the 25th of August and continued all the way to the 28th September the same year. During that time intense heat from rising magma caused steam driven explosions that lofted old rock material up to heights of approximately 5 kilometers. Only one intrusive episode was reported, it took place between the 8th and 18th September followed by a small deflation episode. This was most likely not the first intrusion occurring since it happens after the main action. It is quite likely that at least one major intrusion happened a few months before the phreatic episode. 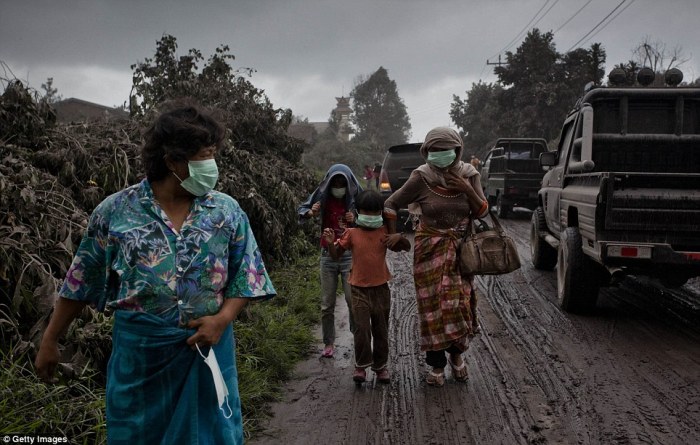 People fleeing in any way they can, both in vans, motorcycles and on their feet. Getty Images.

During 2012 seismic activity under the mountain resumed and continued in distinct episodes up through August 2013. On the 15th of September a phreatic explosion happened that raised the alert level back up to 3 and evacuation of people at the 3 kilometer evacuation zone (3 000 residents).

After that the level was lowered to 2 and people started to return home. During this period seismicity declined up until the 23rd of September when two landslides occurred accompanied by yet two more phreatic detonations. Once again the level was raised to 3 and the people within the 3 kilometer exclusion zone evacuated.

Phreatic activity continued after this with increasing strength and on the 20th of November the exclusion zone was extended to 5 kilometers and an evacuation was started that raised the amount of displaced people to 20 000. On the second of December the first deaths occurred on the mountain as nine people were killed in a landslide in the Gundaling village 12 kilometers from Sinabung.

On the 10th of December the largest ash column was ejected so far during the phreatic phase, it rose to an elevation of 11.6 kilometers above the crater. This episode probably cleared the vent for the magma to slowly start moving up the passage to the crater. During the period 6th to 13th of December low frequency and hybrid earthquakes increased significantly and harmonic tremor occurred continuously as magma started to move upwards.

On the 21st of December seismicity and harmonic tremor once again rose sharply and a dome started to extrude inside the active crater at a rate of 3.5 cubic meters per second. This puts the start of the real eruption to the 21st of December. As the extruded lava dome grew beyond the confines of the crater it started to crumble into pyroclastic flows that rushed down the mountain. Over time they grew in size.

On Saturday the 4th of January the distance of the pyroclastic flows forced an increase of the exclusion zone to 7 kilometers putting further strain on the authorities as more people get dislocated into shelters.

The day after the evacuations started the alert level was raised to 4. At the same time information was released that increases in seismicity and harmonic tremor indicated that a major eruption might be on the way, possibly within days to weeks. The authorities took steps to inform people of two new zones being created, one at 10 kilometers and a second zone extending all the way out to 15 kilometers. The latter might be seen as the largest feasible evacuation zone in the densest populated country on the planet.

Some people have seen the nearby Toba supervolcano and gone “My God! We are all gonna die!” This is of course ludicrous. The magmatic system under Sinabung does not in any way contain enough magma for a supereruption.

On the other scale are people who state that the volcano would continue with dome growth and episodic pyroclastic flows. I found that a bit dubious in regards of the long and steady build up for this eruption and the general behavior of nearby volcanoes.

The interier of the compound caldera of Mount Sibayak. Photograph by Eddharj.

Mount Sibayak is a 1 kilometer wide compound caldera that formed during a VEI-6 eruption as a volcanic dome was blasted away, it has afterwards had episodes where it was partially filled up by Mount Pinto, and then cleared out in an explosive eruption. Judging from the latest 19th century eruption it last cleared out in a large VEI-3 eruption.

So, if this hold true also for Mount Sinabung we could be in for an eruption spanning from a VEI-2 all the way up to a much less likely VEI-6. One should though remember that there might be a repository of 100 year old more evolved magma that might get remobilized by new hot magma.

So, no end of the world eruption within sight, but possibly a bothersome enough medium sized eruption.

They are though facing two problems, both the volcanoes, and the amount of people needed to move. As such they have to cut the corners mightily fine and I do not envy their job, but I take off my hat in their direction. In the end they where mitigating volcanoes around the time we in the western world said “Oh look, a fire-mountain!”

Reader Johan Lindborg went to the Ignaberg limestone quarry in Skåne, Sweden with his son to hunt for fossils. While being there he found a piece of stone that looked out of sorts, and now he has requested help with identifying it.

So, put on your thinking caps and help Johan and his son out with the mystery rock.

235 thoughts on “The Road to Sinabung”