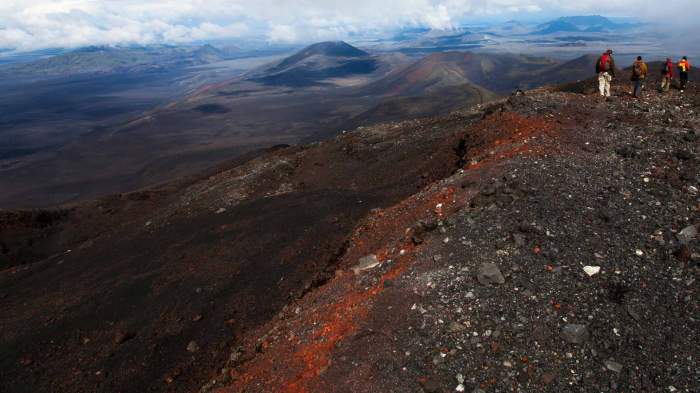 Top off Hekla. Photograph from Trecking in Iceland.

There are occasions when you as an expert in the field write something short and to the point and you expect everyone else to be able to follow you. As you find out that people well and truly did not follow you it is very important to remember that it was you as an expert who failed miserably in explaining yourself.

I have previously been the CEO of two companies developing sensor equipment and I have done extensive consultancy work on, among other things, stealth radar equipment. I have also down the line worked quite a bit with the Global Positioning System. Currently I am busy with forming a startup company together with a few others (some who write extensively here) with the goal of building remote sensoring equipment, and I am the guy developing hands on the GPS unit. Also, I wrote my thesis in the exact crossing between quantum and relativistic physics that defines the formulations behind the Global Positioning System.

The GPS is one of the principal tools in the arsenal of any volcanologist. With a system of GPSs you can detect magma moving into a system and you can even calculate to a certain degree the amount of magma that is on the prowl.

Most often at a volcano you can detect a large scale movement prior to an eruption (Bradyseism) and during the duration of the eruption you can follow how the magma reservoir empties out as magma comes out in the form of lava and or tephra. The perfect example of this is the 2010 eruption at Eyjafjallajökull. 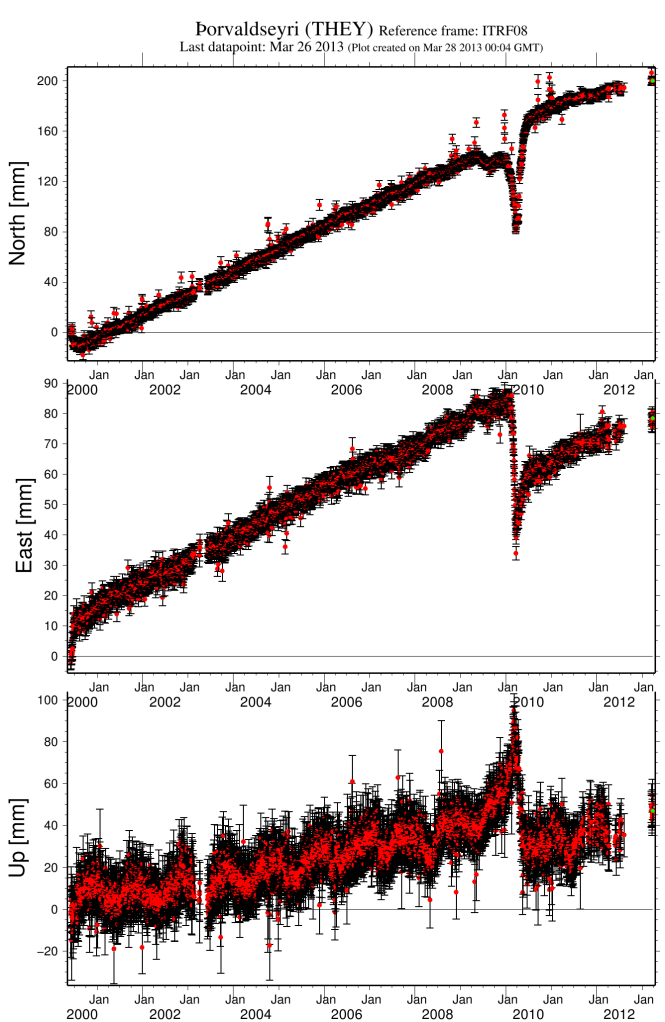 GPS-station Thorvaldseyri showing the GPS-motions for the 2010 eruption of Eyjafjallajökull. Image from Icelandic Met Office.

You can also see how long term changes affect both volcanoes and faultlines as stress builds up and how it releases in the form of eruptions and earthquakes.

All in all a GPS is a wonderful tool. Only problem is that it has become to trusted on some occasions and it is also much too easy to over-interpret what one sees over a short term period. So, I thought I should write about some shortcomings of the GPS and use Hekla as an example. And since I am me it will also go on at length about my favorite volcano.

There have been quite a few reports about movements on the GPSs of Hekla lately, both from amateurs and in media quoting professionals. The very short answer would be “Horseradish”. This is of course a particularly stupid answer, instead let us get down and dirty on Hekla and the Global Positioning System.

I have written extensively on Hekla and her lack of ability to do anything in the normal way of volcanoes. So it should be no surprise that Hekla doesn’t do the Global Positioning System thing the same way as other volcanoes. 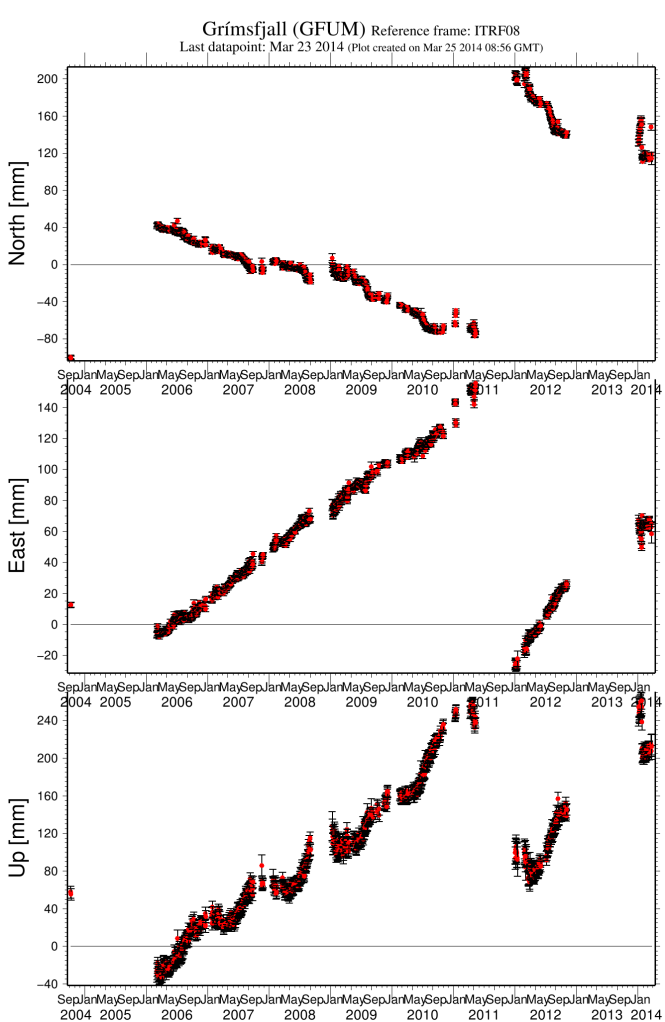 GFUM-station showing the pattern leading up to and after the 2011 eruption of Grimsvötn. The odd changes early this year was Ice on the antenna. Image from Icelandic Met Office.

What she does do is inflate at an incredibly steady rate. This motion pattern is highly simple to predict onwards into the future. A more normal volcano like Eyjafjallajökull suffers at least one intrusive period, then goes dormant again before a final massive intrusion prior to the eruption. But there are of course variations on the theme, Grimsvötn also have a steady rate of inflation leading up to the eruption, but during the eruption she rapidly deflates, and after the eruption there is a rapid hyperinflation most likely caused by compensational melting at the mantle/crust-boundary (MOHO). 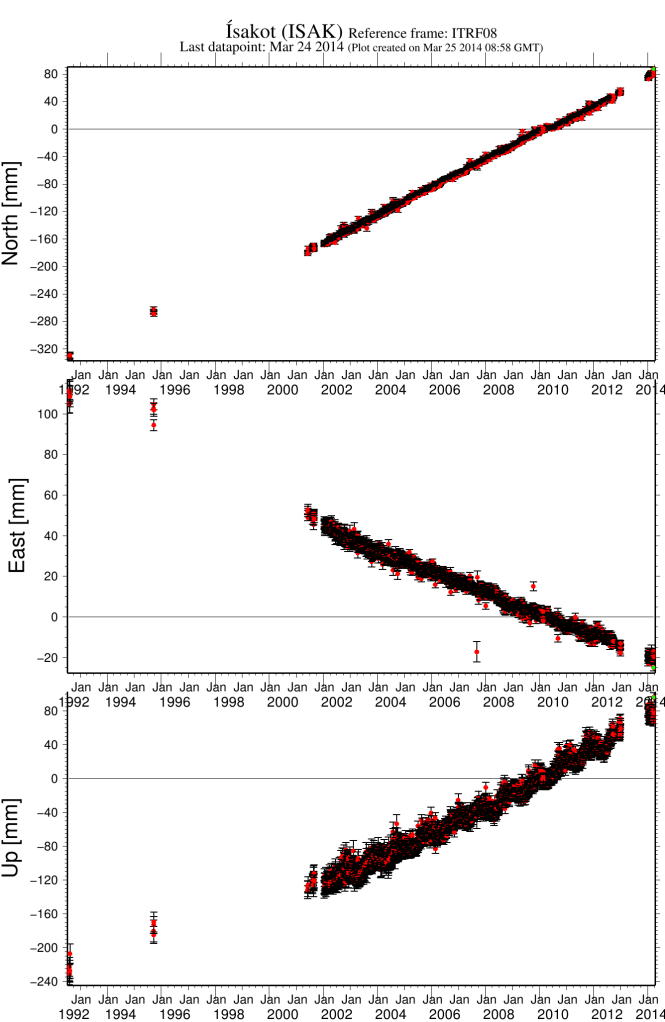 If we take a look at the Isakot (ISAK) GPS we can see that the pattern is as stable as I described above. Due to Isakot not being a continuous GPS until 2002 we can’t see the eruption at it, but we can marvel at the stability. We can also note that it is “wavy” on the UP-component. These are seasonal variations caused mainly by differences in thickness of the atmosphere during the year.

But, we know that Hekla has an UP-component of 1.5cm per year, EAST-component is -0.63cm and that the NORTH-component is 1.9cm. If we now calculate a trajectory for the station we see that it is moving north and away from Hekla towards west. 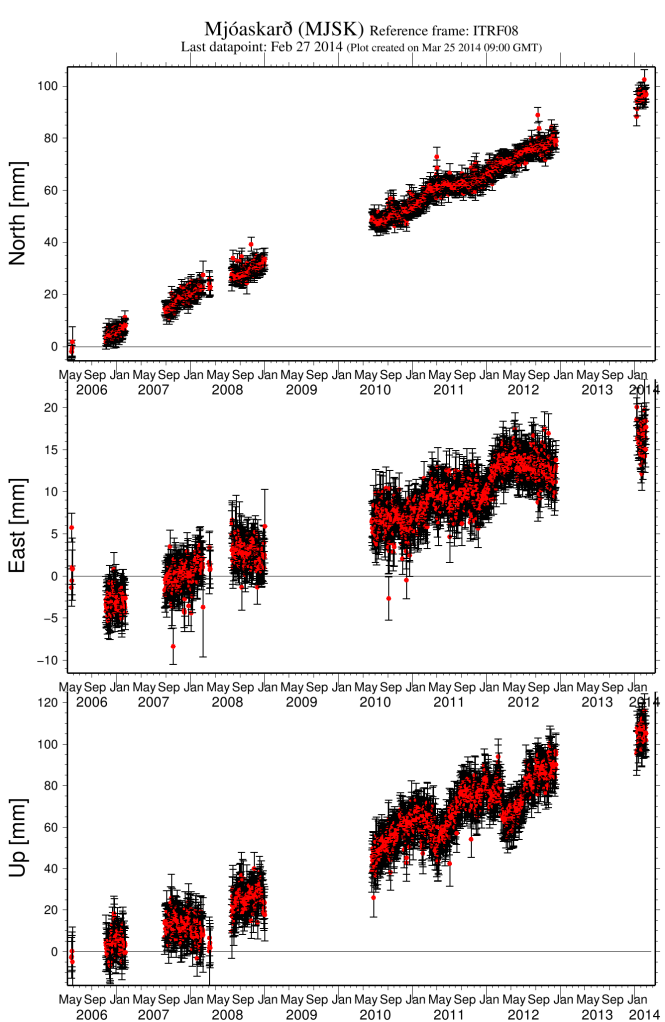 Now, let us take a look at the Mjóaskard (MJSK) station. It is on the opposite side of both Hekla mountain and on the other side of the fissure. This station has been online since late 2005 and is therefore looking a bit less precise when compared to ISAK. The UP-component is 1.5cm, EAST-component is 0.2cm and the NORTH-component is 0.85cm. 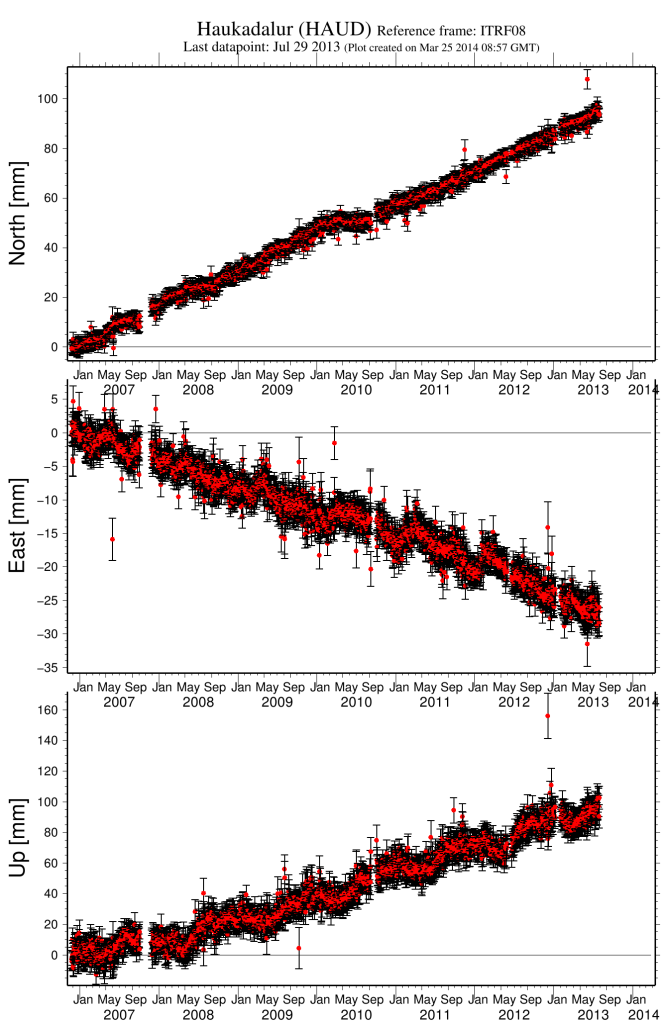 ISAK and MJSK are almost exactly on a north/south angle from each other with Hekla in between. There is no station close by to the east of them, but there is a good one almost directly east of MJSK, the venerable old Haukadalur station (HAUD). UP-component is once again 1.5cm, EAST is -0.45cm and NORTH is 1.45cm. Fairly the same trajectory here as for ISAK. 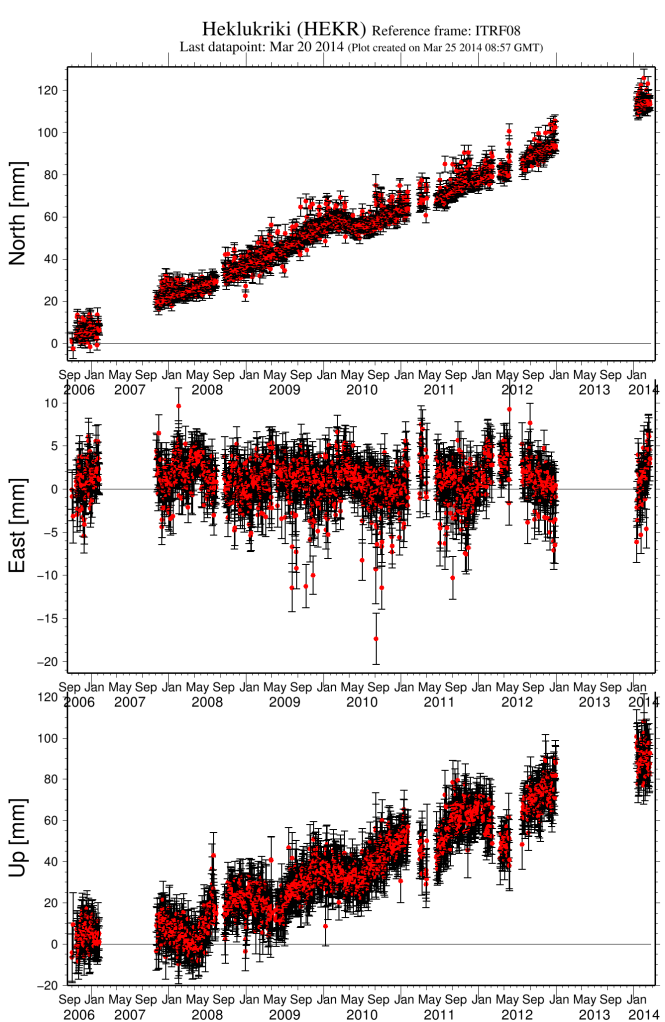 Now we should probably compare all of this with the station closest to the top of Hekla. Right off I should say that this station picked up quite clearly the Bradyseism of Eyjafjallajökull, so briefly it changed from going stably to the north it made a little knee. UP is 1.13cm, EAST is 0cm and NORTH is 1.5cm and if we correct for the Eyjafjallajökull-knee we get a north component of 1.6cm. Here we can see that there is no EAST motion due to it being right on top of the Hekla Volcanic Fissure. We can also decide that Hekla is actually moving Northwards on all stations, but faster at the center and on the western side of the fissure. The big surprise here is that Hekla Mountain is having a slower uplift than stations further away. The reason for this is that the weight of the mountain is pulling it downwards through the very thin and malleable crust. The reason for the crust being malleable is that it is very hot right up to just under the surface.

First off I should state that there are changes on the GPS exactly when Hekla erupts, but these changes are caused by the opening up of the mountain and not by magma movement. After the eruption the mountain resets to the previous value.

All of this leads to a couple of rather stunning conclusions; the first is that Hekla is not a Volcano. Instead we can see that Hekla is a Volcanic Fissure between two independently moving microplates. We can also see that the fissure is being pushed apart at an even rate of 0.65cm per year East-West and 1cm North-South and that this is quite enough to keep the fissure open at length and all the way down to the Mohorovic-boundary. This theory is also conformant with the even rate of inflation of Hekla, as the magma forms due to decompression melt it expands as it moves upwards due to gas release giving an added volume explaining the excess uplift. As the volcano erupts it causes an imediate pressure drop at depth causing the decompression melt to accelerate which compensates for the ejected material. The next little evidence in the chain is that if decompression melt did not occur at a highly increased rate during an eruption Hekla would slump downwards, or even fall into itself creating a Graben or a caldera formation.

I have really tried to reconcile Hekla´s characteristics with the more standardized models of magma chamber setup and inflation-models, but in the end an obloid fissure open at depth is the only solution I could come up with that explains all of her oddities. In my previous post on Hekla I wrote about the other reasons, but then I failed to explain the GPS part. Mea culpa!

I hope that everyone now understands that Hekla is not bulging anywhere, at least not more than she has bulged for 8000 years. Some of you might also have discovered something funny. It is often claimed that Hekla in 2006 had more magma in her magma-reservoir than prior to her 2000 eruption. This is of course horseradish; she had the same amount of magma before erupting as she had after erupting, no more and no less.

124 thoughts on “Hekla and the Global Positioning System”