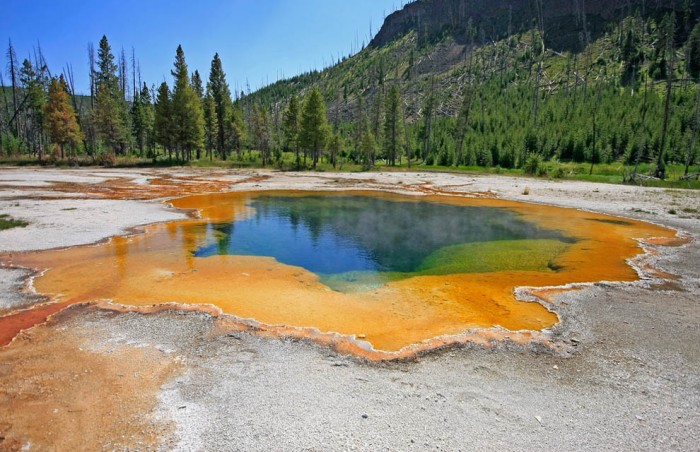 This is just a brief little post on Yellowstone to make everyone happy that is based mainly on what GeoLurking wrote in the comment field on the previous post.

First of all I would like to say that the activity behind yesterdays M4.8 earthquake is an ongoing process that has been running at least since 2003. I should also say that it is normal behavior from such a large volcano as Yellowstone. Next thing that is important to know is that for a big volcano like Yellowstone this is nothing. I would lift an eyebrow if there was several meters of uplift per day, a few centimeters is really nothing.

In 2000 the activity at Steamboat Geyser resumed after a nine year hiatus and a new thermal feature opened up in 2003. After that intermittent small earthquake swarms have occurred in the area, the latest one is not really out of sorts. It is also a good idea to remember that the current activity is mainly towards the ringfault on the caldera edge. And one should know that fresh magma arriving into the system shows up as an inflation in the middle of the caldera, not on the side like now.

During two previous earthquake swarms the geologists at USGS has decided that the cause was movement of hydrothermal fluids or a minor movement of magma. No new arriving magma has been detected into the magma reservoir of Yellowstone, so if it is magma moving it is old and stale magma depleted of volatile gases.

Yellowstone has had minor eruptive activity after deglaciation in the form of minor lava effusion, but no major eruption. It is at this stage highly unlikely that an eruption will occur, there is though a minor chance that sooner or later a hydrothermal explosion, maar-formation, will happen at the location of present activity. The risk for a major eruption is zero.

If you look at the plot by GeoLurking above you will notice that there is a line marking the boundary for where superheated water goes supercritical and expand violently. Now imagine that old magma moves close to the water table there, that could cause a steamdriven explosion, or your basic maar.

So the earthquake itself, is that not dangerous? No, not at all, it is just a sign that the pressure is increasing and is being released as the hydrothermal fluids get excited. The most likely outcome is a new hydrothermal field and that Steamboat become a tad unruly. The Yellowstone area has suffered an earthquake 500 times more powerful in historic times, go figure how little effect this one will have.

If you believe that a Supereruption will occur you should instead go to IKEA and buy the lamp named LIFE.

86 thoughts on “The shivering Yellowstone”