Panorama with Wrangell on the left and Drum on the right — http://pubs.usgs.gov/dds/dds-39/album.html

The Wrangell Volcanic Field stretches from the Yukon Territory, Canada northwest into central Alaska. Total coverage of over 10,000 km2 from 12 major eruptive centers. Ages range from 26 MY to around 200,000 years ago, with the most recent activity being toward the western end of the field. There are a pair of volcanoes identified on the Canadian side with the rest being in Alaska. The volcanoes are for the most part andesitic – basalt shield volcanoes, topping out in some places over 5,000 m. Several are topped with what are thought to be subsidence caused calderas measuring 4 – 8 km in diameter, not unlike calderas on top of Hawaiian volcanoes. Wrangell itself is topped with active fumaroles and last erupted in 1930. http://www.avo.alaska.edu/volcanoes/volcinfo.php?volcname=Wrangell 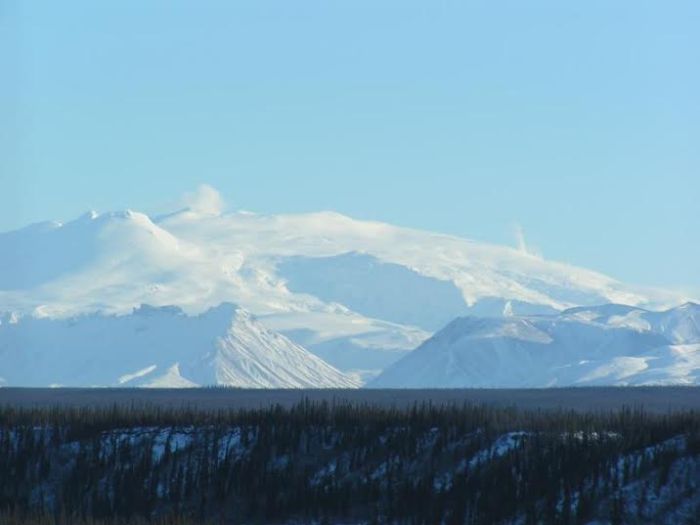 Three of the eruptive centers are thought to be stratovolcanoes. One of these, Mount Churchill is the probable source of the largest eruptions in North America in the last 2000 years, when a pair of eruptions around 100 AD and 860 AD deposited over 50 km3 of pyroclastic flows in two lobes called the White River Ash.The source of one lobe has been directly tied to Churchill. The other source is not so well defined, and it may be out of Churchill or its close neighbor Mount Bona, though the 3 km wide caldera sits between both peaks, this may be a distinction without a difference. Other than the White River Ash, there is not a lot of pyroclastic debris along the volcanic field. All mountains are capped with glaciers and ice caps year round. http://www.avo.alaska.edu/volcanoes/volcinfo.php?volcname=Churchill,+Mt 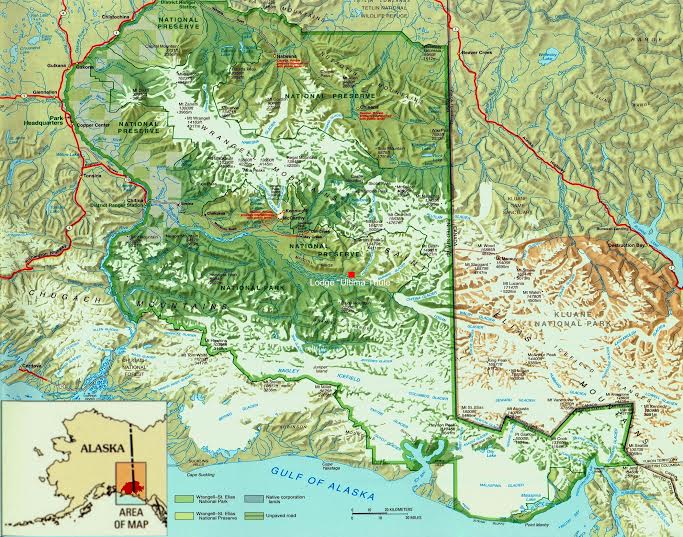 From their products and structure, it is clear these are not normal subduction volcanoes along a typical volcanic arc. In order to understand what is going on, we need to take a look at how the region was formed. The majority of the following can be found in “A Geologic Guide to Wrangell—Saint Elias National Park and Preserve, Alaska” by the USGS in 1999. http://pubs.usgs.gov/pp/p1616/

Wrangell – St. Elias is the location in southern Alaska where the Pacific Plate has deposited chunks called terranes onto Alaska. As you travel westward from the Canadian border, these terranes are smashed up against one another much like India has smashed into the underbelly of Asia causing significant deformation and uplift.

In this area, no less than seven different terranes have been identified, with the Yakutat being the most recently delivered. The terranes have been accreting into Alaska for over 200 million years. Each suture is bounded by fault lines, which in turn release compressive energy in the form of strike slip or subduction earthquakes. As you travel west from the Canadian Border, the tectonic forces change from accretion to subduction we see along the Alaska Range and Aleutians.

The terranes are composed of a wide variety of material including Pacific Ocean crust, detritus from erosion into the ocean, islands, and chunks of the North American continent. The motion of the Pacific Plate is generally north to south along North America, with portions of the continent on the west side of the fault line moving north. It has been observed that Los Angles will sit abeam San Francisco in some 30 million years. Eventually, plate movement will deposit that part of the continent onto southern Alaska.

When the terranes reach Alaska, they behave in a variety of ways. There has been some subduction, which is blamed for providing the volume of melt necessary to build the huge volcanoes of the Wrangell Volcanic Complex. But the majority of the mountains are andesitic – basalt shield volcanoes – huge ones, at that – which is hardly the product of subduction volcanism with highly evolved magmas. There is comparatively little pyroclastic output in the region. I have yet to find a good explanation for the question. I am used to basaltic shield volcanoes being intra-plate, hot spot related, or spreading rift vents. None of these apply here.

Once the terranes have been deposited, they continue to be pushed and deformed by the compressive action of the Pacific Plate movement. They deform. They slide against one another along the fault lines that separate them. Some of this movement is quite large, with one terrane estimated to move over 250 km to the west since arrival. The entire region is bounded at the north by the Denali Fault, which is one of the major fault structures in North America. It sits roughly east – west along the northern edge of the grouping of terrains and is a strike – slip type of fault. The area is wracked by significant earthquakes in 7 – 8 Richter range. Measured displacement is as much as 14 m uplift following a series of quakes in 1899.

The last major quake on this fault was a 7.9 Richter quake in 2002. It was widely felt statewide and its effects showed up in water wells far into the Lower 48 states of the US. The maximum movement along the fault was just over 9 m. It was strongly felt in Anchorage, some 280 km south. Duration was up to 3 minutes in Fairbanks. I rode it out at a Costco store in Anchorage. The large lights swung back and forth for a long time. The fault line also crosses the TransAlaska Pipeline System (TAPS) perpendicularly. No oil was spilled and the pipeline was briefly shut down. http://pubs.usgs.gov/fs/2003/fs014-03/

The interesting thing about this quake was that the seismicity of Mount Wrangell diminished as much as 80% for the next five months, with quakes ascribed to magma movement diminishing. The seismicity never did recover, indicating something changed with the quakes. The best guess – and it is really a guess – is that the massive movement along the fault somehow disrupted the supply of new magma to the volcanoes. This quake was preceded by a 6.7 Richter quake in the vicinity about 10 days before. http://www.revistas.unal.edu.co/index.php/esrj/article/view/21259 http://www.aeic.alaska.edu/input/steve/PUBS/ssa04602_wrang_DFE.pdf

Initial eruptions began some 26 MY ago as the Pacific Plate subduction reached the point where melt started reaching the surface. The angle of the plate and the rate of subduction increased some 5 MY ago, at which time most of the western volcanoes started being built. They grew very quickly with massive outflow of andesitic basalt lavas. Around 200,000 years ago, the majority of the eruptions stopped. Geologists do not have a good explanation for this reduction in activity. The eruptions out of Mount Churchill 1,800 and 1,200 years ago were pyroclastic in nature, indicating evolved magma. 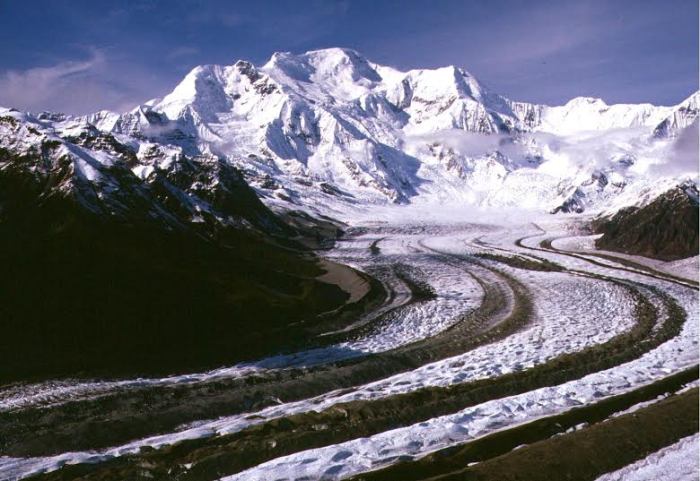 Current activity includes active and vigorous fumaroles out of Mount Wrangell. There were some phreatic explosions over the last couple centuries, but the area is so isolated that it is difficult to establish what happened, why and most importantly when. It does not help that the entire region has been designated national park and wilderness area, keeping all but the most determined amateurs out. There is also a number of hot springs and hot spring powered mud volcanoes (not natural gas powered) in the vicinity of Wrangell. As with all glacially covered volcanoes, any activity will create significant lahars down into surrounding valleys. http://www.uaf.edu/files/aqc/way-wall_CJE2002.pdf 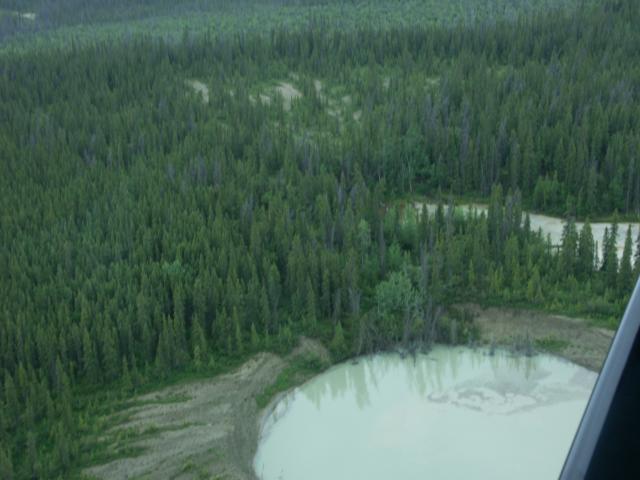 Mount Wrangell is a 4,300 m high andesitic shield volcano. Youngest volcano with activity from 750,000 years ago to near present. Total volume of the mountain estimated at over 900 km3. Capped with a 4 by 6 km caldera as much as 1 km deep. Caldera thought to be formed by withdrawal of magma. Several smaller cones on its flanks. One lava flow as far as 58 km from the volcano, indicating a large rate of eruption. Active fumaroles. Evidence of flank collapse. http://www.avo.alaska.edu/volcanoes/volcinfo.php?volcname=Wrangell

Mount Drum is the farthest south of this group. 3,600 m peak constructed by andesite, dacite and rhyolite 650,000 – 240,000 years ago. Evidence of explosive, cataclysmic eruption that destroyed an ancestral cone that was later rebuilt. That eruption deposited over 7 km3 on surrounding territory. Multiple domes and pyroclastic debris. This one is a stratovolcano. http://www.avo.alaska.edu/volcanoes/volcinfo.php?volcname=Drum

Additional volcanoes to the west of these include Capital, Jarvis, Tanada Peak, Skookum Creek, Gordon, Blackburn, and a series of volcanic vents in the Western Wrangell Volcanic Field. Most of them are not visible from the sparse road system. All are covered by the ice field covering the closely spaced very tall volcanoes. All measure in the vicinity of 4,000 m tall or taller. http://www.avo.alaska.edu/volcanoes/volcinfo.php?volcname=Monogenetic%20QT%20vents%20of%20WWVF

Mount Churchill and Mount Bona, are a pair of stratovolcanoes with a 3 km caldera in the saddle between them. Height of some 4,800 m. Source of White River Ash, as much as 50 km3 pyroclastic flows from two eruptions less than 2,000 years ago. Ice and glacier covered. http://www.avo.alaska.edu/volcanoes/volcinfo.php?volcname=Churchill,%20Mt

This is a geologically interesting part of Alaska, and perhaps the newest part of the state. The continuing accretion of new terranes drives earthquake activity which in turn open and close access to melt from subduction and elsewhere. The majority of these volcanoes are locked up within a massive wilderness area and all are covered with glacial ice fields, so data gathering is difficult at best. The reason for the cessation of significant activity 200,000 years ago remains a mystery. The explanation for massive andesitic basalt volcanoes fed by subduction is also a significant question, for me at least. But they are stunning to drive by.