The volcanic ash advisory center (VAAC) Tokyo issued a warning this morning for ash hazard up to FL270 (8.2 km) extending south-west which by now has dissipated. KVERT has the volcano on orange alert and estimated the height of the ash plume to 13120-16400 ft (4-5 km) above sea level. The plume was barely visible on todays Aqua/Modis (NASA) image.

KVERT also reports that the growth of the lava dome continues, accompanied by moderate ash explosions, fumarolic activity, incandescence of the dome summit and hot avalanches.

On his blog Peter Webley shows an animation of the eruption seen on the EMSD webcam located about 50 km south-west of Shiveluch in the town Klyuchi.

As I am writing there are several columns of steam or smoke rising from the southern base of the volcano seen on the KVERT webcams. My personal impression is that they arise from the border a fresh avalanche or lava flow, but they might as well be from, as KVERT wrote, fumarolic activity or something unrelated to volcanic activity. 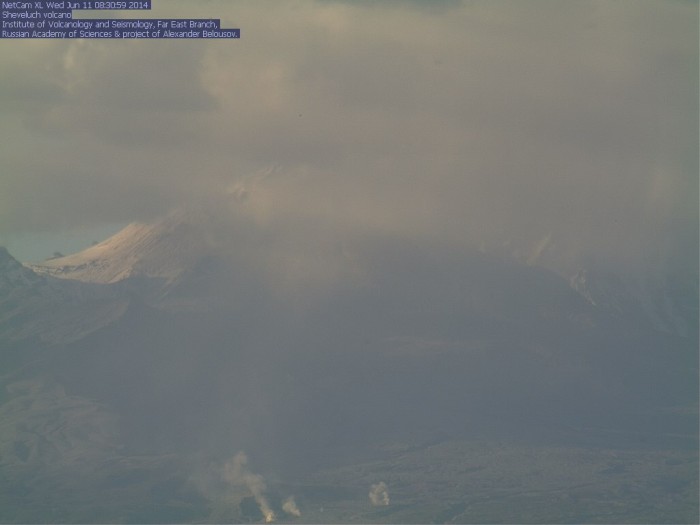 Webcam screenshot from 11 June 2014 from http://www.kscnet.ru/ivs/video/Sheveluch.html

Looking at earthquakes under the Kliuchevskaya, or northern or group of volcanoes one can see almost continuous activity at 30 km depth under Kliuchevskoy which appears to be the major source feeding the conduits to the volcanic edifices. 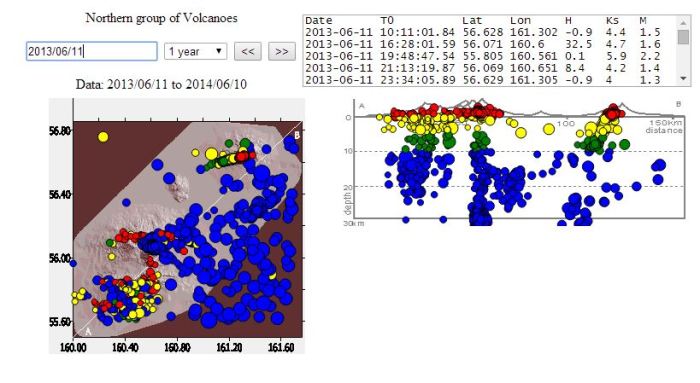 One year of earthquakes under the Kliuchevskaya group of volcanoes. Image from http://www.emsd.ru/ts/datareload.php?id=1

Below Shiveluch the seismicity of the past month does not seem out of the ordinary viewed at this level of detail: 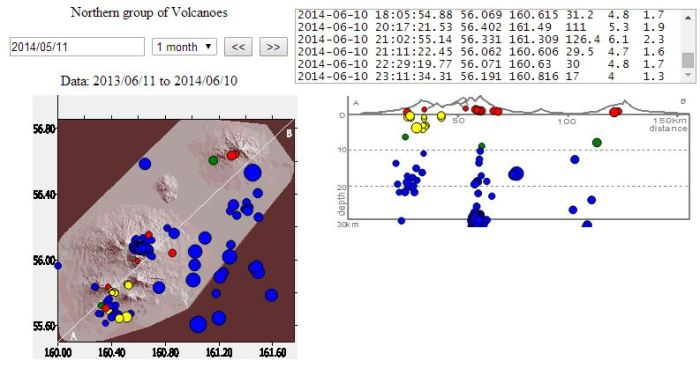 Seismicity of the past month under the Kliuchevskaya group of volcanoes. Image from http://www.emsd.ru/ts/datareload.php?id=1

For further reading and background information I highly recommend reading Ukviggen´s “Shiveluch, the bad boy of Kamchatka” and part two again. And for the tectonic background read Sa´ke´s post about the Central Kamchatka Depression. Also check out KVERT´s image gallery.

1. Carl walks the line out to sea, but did you know he’s a saint + image? Answer: San Carlos, on the Cameroon line, which extends from Africa to the Atlantic, Equatorial Guinea, Sissel, 2 points.

2. Norway’s last stand. Answer: Beerenberg on Jan Mayen. After Germany invaded Norway, a couple of Norwegian meteorologists on the island refused to surrender. KarenZ, 2 points, mikegrimsvotn 1 bonus point for not spoiling the fun!

3. Digging for carrots in Arkansas?  It’s the only place you can do so! Answer: Crater of Diamonds volcanic pipe.
It has a state park on top, where you can dig for them. It is the only public diamond “mine” in the world. It’s also interesting, because it’s NOT kimberlite. Agimarc, 2 points.

4. I had an intrusion in 2009, but no eruption. Alhamdulillah! Answer: Harrat Lunayyir. Sissel, 2 points.

5.The gods were frightened by a moon as bright as the sun. No soybeans were harmed, though! Answer: Tofua volcano, Tofua Island, Haápai Group, Tonga. See http://en.wikipedia.org/wiki/Tofua#The_oral_tradition_of_Kao_and_Tofua for the story, Evan Chugg, 2 points.