When I first heard news on a volcano erupting in El Salvador last winter, I was somewhat shocked that even the smallest country of Central America (and with the highest population density) 3 would have to deal with volcano monitoring and hazard mitigation, above all other problems they have on their heads – while your mind comes up with summer sun, palms and white Pacific beach upon mention of El Salvador. I am not a volcanologist nor any earth scientist, but have gathered some interesting information on the Chaparrastique volcano on the internet for you.

El Salvador is located in one of the most seismologically active regions on earth, situated atop three tectonic plates. The motion of these plates causes the area’s destructive earthquake and volcanic activity. The Volcanic

Cordillera in El Salvador is a line of volcanoes parallel to the coast and the offshore subduction zone. Virtually all the subsoil of the country (over 90%) is composed of volcanic materials.

Geological research of the early seventies, made by the German Mission, recognized up to 700 eruptive centers in El Salvador. The GVP Catalog has El Salvador with 18 individual volcanoes and three volcanic fields, however, based on geological investigations and recent field surveys in the Volcanic Cordillera scientists determined 23 active volcanoes and five volcanic fields. At present, only a few volcanoes have continued activity (outgassing and exceptionally ash) such as the Santa Ana volcano, the San Salvador volcano, volcano San Miguel and Izalco volcano.1 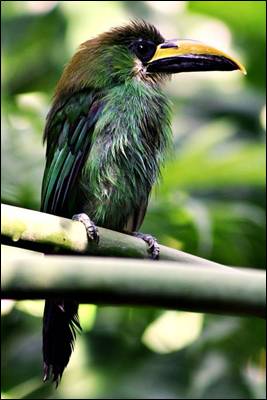 Chaparrastique rises from an elevation of approximately 100 m on the eastern coastal plain of El Salvador to a hight of 2132 m a.s.l. With respect to its relief and beautiful symmetry it is the most impressive volcano of El Salvador. Northeast of the volcano (ca 15 km) lies the city of San Miguel (population ~300,000), which is the center of commercial activity of the eastern half of El Salvador.

Structurally, San Miguel volcano lies on the southern fault of the Central American graben at an intersection with NW-SE faults, which are evident by the alignment of radial fissures that erupted lava flows in 1844 and 1855.8

The local name, Chaparrastique, means “shrub landscape on warm ground” indicating the importance to the locals of certain plants for preventing soil erosion and keeping moisture; Los Perolitos probably refers to hot springs. Coffee tree plantations and agaves characterize the slopes of Chaparrastique up to the tree line.

Chaparrastique has a broad, deep crater complex, which has frequently changed morphology during historic eruptions. Its summit crater has a diameter of about 1 km. Presently the crater is observed to have concentric faults with collapse benches surrounding an internal crater of approximately 0.2 km in diameter. When viewed from the west the summit of the volcano presents a very rugged morphology. It is also apparent, from the change in slope, that the summit has suffered collapse or it has been destroyed by a violent eruption. Later eruptions up to the present continue to fill in the old crater.

There is very little information about the petrology of San Miguel volcano, due to a lack of studies on the subject. However Meye-Abich (1956) notes that older lavas of San Miguel commonly are olivine-pyroxene basalts, while more recent lavas such as the 1844 lava flow on the northwest side of the volcano present a more andesitic composition.8 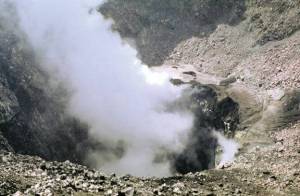 The first records of rumbling and degassing activity began in 1586 after 107 years of dormancy; the first historical eruption ocurred in 1699 with a lava flow from an open vent on the SSE flank. From then on, eruptions are reported roughly every 10-20 years, producing mafic lavas and tephras in mostly small VEI events. They were often just ash and gas emissions, but also a number of fissure and flank vent eruptions with effusive lava streams, blocking the nearby roads.5 Her eruptions are generally of strombolian nature, lasting from several days to months. The location of radial fissures and flank vents has migrated higher on the edifice during historical time, and the most recent activity has consisted of minor ash eruptions from the summit crater.6 Ash fall associated with historic flank eruptions has been reported up to 20 km from the volcano, and fell on the city of San Miguel in 1931. In 1976, small scale fountaining occurred in the summit crater and produced minor ash fall within a few km of the crater. Recently, small debris flows composed mostly of scoria have caused property damage on the northwestern flank of the volcano. Based on its historic activity and its current seismicity, gas emission and rock alteration, San Miguel is perhaps El Salvador’s most likely candidate for hazardous activity.7 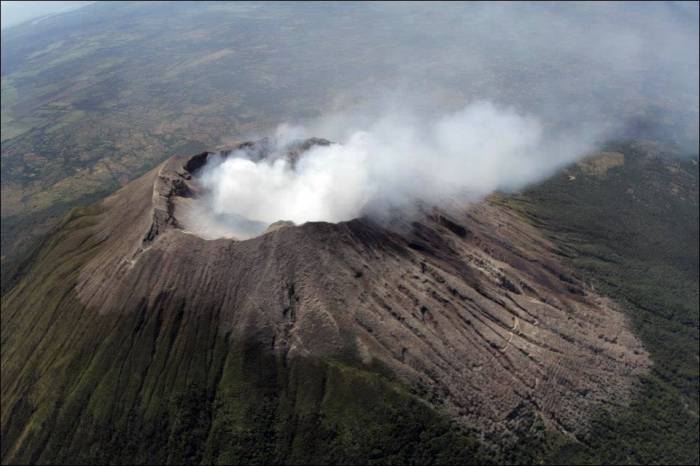 RSAM during and after eruption Dec. 2013 Station VSM. Source SNET (green date line by the author)

From early December an increase in seismic activity alerted volcanologists that Chaparrastique’s quiet period of 37 years may be over. On 29th December an over 5 km high ash plume confirmed the fact. Until evening Aeropuerto Internacional El Salvador had cancelled most of its flights and several thousand people in a 3 km radius danger zone were evacuated.9

MARN’s webcam video of the onset of the 2013 eruption:

It was a shortlived eruption as seismicity decreased substantially over the following two days, although gas and slight ash emissions have been reported on and off since.1 However, from early January on there where fluctuations in seismicity that signalled the volcano had not gone back to sleep.

There is rarely a volcano teasing the population living around it as badly as Chaparrastique does. In May 2014 seismicity increased to RSAM values similar as before the eruption in December last year. Volcanologists soon began to warn that a new eruption could not be ruled out.

Steam clouds and slight ash emissions increased and so did the general seismicity. From June 27-30 the RSAM rose to values that were coming near those reached by an eruption. Ash and gas emissions got stronger and more frequent. A bit lower now, but still a very high risk of eruption – this situation must be nerve-wrecking for the locals, especially for those who have plantations on the slopes of the volcano.

These are the scale everyone is looking to for assessment of the state of affairs at the volcano. Yet I doubt that many know how those figures come about. I have read up on the subject but it is very complex. Basically, they are a computation of various data from seismographs, tilt and deformation measurements that results in a… let’s call it activity index. (This is my interpretion of what I read, please correct me if I am wrong).

So, if and when the volcano will erupt again is anybody’s guess, but sure it will. If it does, it will again affect about 15.000 people, and square kilometers of coffee plantations. The main nuisance will be the amounts of ash destroying crops and buildings. The other danger are the lahars that are to expect. The area is already at very high risk for landslides, which shows in the regular reports on expected rain fall and landslide susceptibility.10 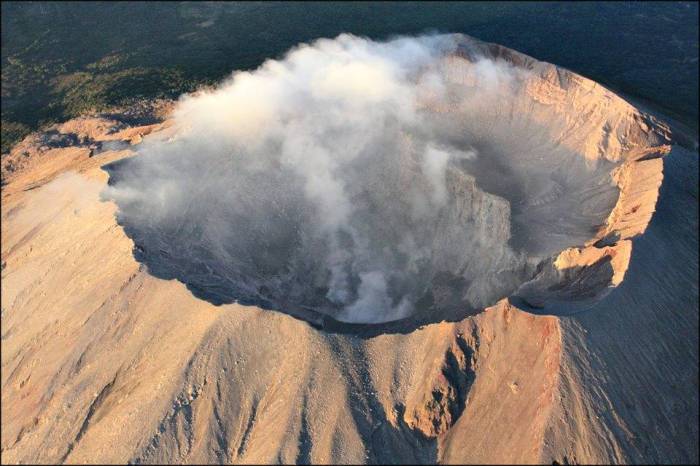 If you want to keep an eye on Chaparrastique: