Before I start writing I wish to reiterate the following. The official judgement on any eruption in Iceland is solely within the hands of Icelandic Met Office (IMO) and Almannavarnadeild ríkislögreglustjóra. Untill they release a Stonetablet stating that an eruption has started there is officially no eruption.

Ash from an eruption

I have now had several people who work with air traffic in various capacities asking me what to expect. I am highly reticent to give any answer on this. The qualified authorities are in given order London VAAC and IMO. Heed their warnings.

After all this is a scientific blog, not an official warning site. That being said, I will give a few parameters about what I think is possible, but it will be a really wide spread since a lot of what is happening is in unknown territory. This will just be the general parameters for various types of eruption (in probability order), wind and weather will take care of the actual dynamics. Also, the ash itself is an important parameter that we do not really know a lot about since it was such a long time since Bárðarbunga had its last major eruption (not saying that this will be a major eruption). If it is fine grained it is more problematic, if it is coarse it will cause fewer problems.

Now, do you guys understand how silly it is to even ask that question? There are no answers to what you are asking since we do not yet know what kind of eruption will happen. Just wait and see, and read the London VAAC before taking off. I am sorry if I can’t give the answers you hoped for.

Personally I am looking forward to my air trip to Guatemala in October if that is any inkling to what I believe. Well, that being said let us now go into the nitty gritty. 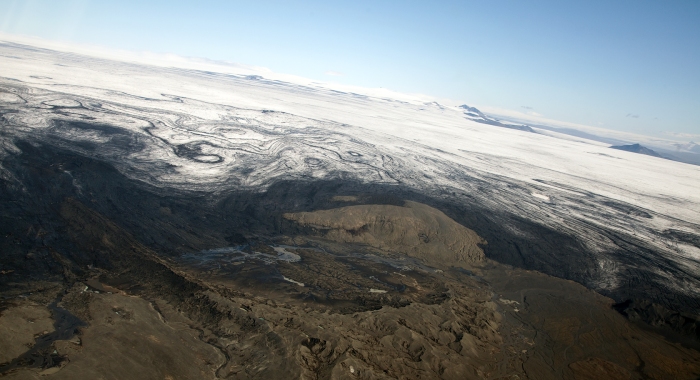 Sidujökull, the area that the Laki fissure swarm exits from. Photograph taken by Eggert Norðdahl, all rights belong to the photographer, used by explicit permission. To obtain rights email Volcanocafé.

Earlier today our fantastic house photographer Eggert Norðdahl did a flyover over the area to take photographs. Sadly clouds covered parts of the area, and no visible signs were available. But we got beautiful before the eruption images.

If the weather is good we will get aerial photography when the eruption starts (or becomes visible).

I would like to state that Volcanocafé have been granted publishing rights, if any news agency wish to use the images, or wish to come into contact with Eggert Norðdahl for more images of the upcoming eruption, just send an email to us at our Volcanocafé email.

The GPS trend is now clear with very rapid motion of all nearby stations. The speed and direction is in line with a medium sized to large intrusion of new magma into the volcanic system. Click on the images for larger view. Note that Dungjuháls GPS has moved west 30mm and north 30mm in two days. That would indicate that the intrusion is to the souteast of the station. 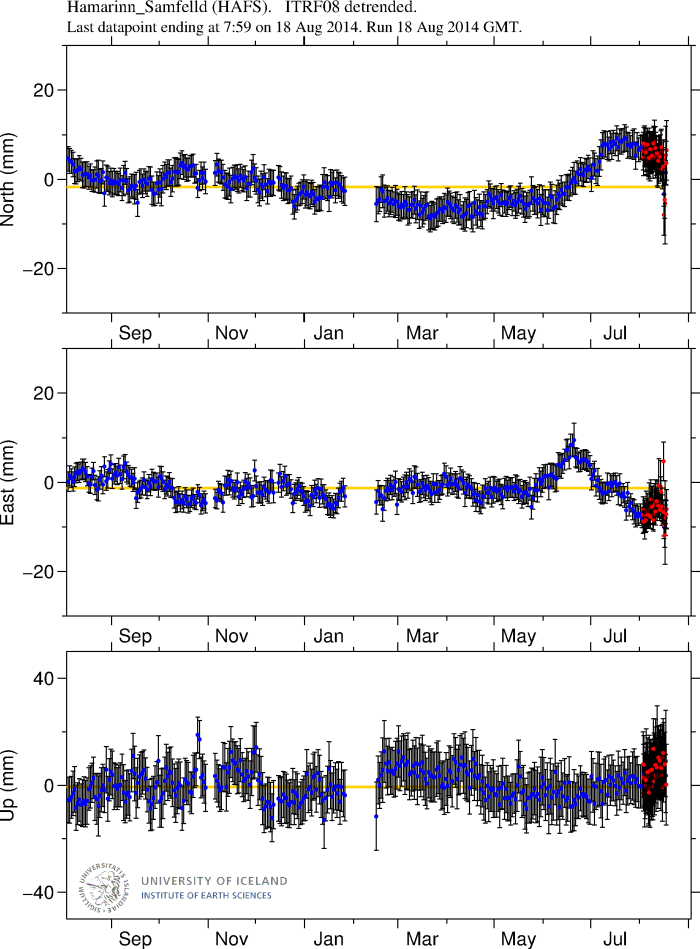 The Hamarinn GPS is moving almost straight south indicating that the center of inflation is north of the GPS.

At 10.15 local time harmonic tremor started to be visible at Dyngjuháls seismometer. At 10.40 an uptick in earthquakes started and harmonic tremor became visible on almost every seismometer on Iceland. It is unclear if that was a signal of magma breaking through under the ice, or if it is from massive degassing as magma rises upwards.

So far the largest earthquake is an M4.5, this is not as large as I expected prior to an eruption. But, it is possible that I was over interpreting data from the Lakí eruption and that there is no need for earthquakes above M5 prior to onset of eruption.

Vatnajökull photographed from West in the direction of attention. Photograph taken by Eggert Norðdahl, all rights belong to the photographer, used by explicit permission. To obtain rights email Volcanocafé.

Once again, IMO and Almannavarnadeild ríkislögreglustjóra are the ones publishing official statements. What I write are just the musings from someone who has read everything ever published on Icelandic volcanism.

Currently I favor two options. Either a small eruption started around 10.40 local time, if so it is most likely a small fissure eruption between Bárdarbunga and Kistufell central volcanoes. Normally it takes a day or two for those to go through the thick glacier ice, if they even do that.

My second option is that the signals are from magma rapidly moving upwards in one of the central volcanoes. If it is in Bárdarbunga we will most likely see an eruption soon. If it is at Kistufell we have 3 options. 1, it will be a drawn out process before the eruptions starts due to the magma having to hammer its way through a thick top layer. 2, we will see an increase in earthquake size until we see M5 earthquakes. 3, this is the boring option that says that the magma will not have the energy to break through the top layer.

There is also a third option that this is the start of a larger fissure eruption. That would most likely involve quite a lot of heavy earthquakes.

In the end we are in the beginning of things. I have been convinced for the last 2 weeks that we are moving towards a possible eruption. Problem is just that the signals are still not clear on were the center of attention really is. If I am lucky I will get what happens before it happens, but if not I will be pleasantly surprised.

437 thoughts on “Probable eruption at Bárðarbunga”