Photograph by Eggert Norðdahl. All rights reserved and used under permission.

I once again reiterate that it is Icelandic Met Office and Almannavarnadeild ríkislögreglustjóra that has the authority to issue warnings for Iceland in regards of eruptions and jökulhlaups.

For airborne ash advisories it is in the following order London VAAC and IMO that issues advisories. That being said here follows a brief update upon what is happening in Bárðarbunga and Grimsvötns fissure swarms.

Volcanic love in the ground

Who would have thought that the two largest volcanoes of their type on earth could make love to each other? Well, let me expound a bit on how they do it physically. For anyone who is a bit sensitive, this is where you should stop reading. It will get very graphical.

Since the seismic swarm started there has been quite a lot of confusion about what is going on, and where it is going on. Thanks to the Icelandic Met Office (IMO) we now have answers to our questions, and what glorious answers those are.

The reason the picture has been so muddy is that IMO has been swamped by earthquakes. So they have not had the time to manually correct every single one. Instead they have concentrated on the larger ones since they have a much higher importance. Remember that one M2 earthquake carries the energy of 31.6 M1 earthquakes. This means that IMO has only corrected the large ones and the smaller has been left hanging around.

Now, small earthquakes gives less clear signals compared to larger earthquakes, so the smaller the earthquake, the larger the errors. So, many of the uncorrected earthquakes are several kilometers off in all directions. Think of this as a blurry picture. In this case so blurry and out of focus that what actually was going on drowned completely.

Now thanks to IMO we have maps only containing manually recalculated earthquakes, and due to that we can see what is going on and where it is going on. And out of the mist a scene of unadulterated volcanic lovemaking emerged.

The large Icelandic volcanoes are situated on something called fissure swarms; those are permanent thin areas of the crust that are permanently weakened as the continental plates pull apart. They are in a sense of it the actual rifts where the Mid Atlantic Rift (MAR) pulls apart.

The central volcanoes interact with their fissure swarms in many intriguing ways. But it has been the general opinion that each fissure swarm is a system on their own. There are a couple of hypothetical places where it is suspected that some sort of mechanical interaction could exist, but there has never been any clear cut proof of it. And there has never been any proof or even a causal chain proving movement of magma in between them.

Untill now. First I need to explain one last detail before we get to our lovemaking fissure swarms.

Radial fissures are fissures that extend outwards from a central point, in this case a central volcano. Think of it like the spokes on a bike wheel. Several are known for Bárðarbunga, the most well known is the Gjálp fissure that erupted in 1996 that extends from Bárðarbunga towards Grimsvötn.

Love is in the ground 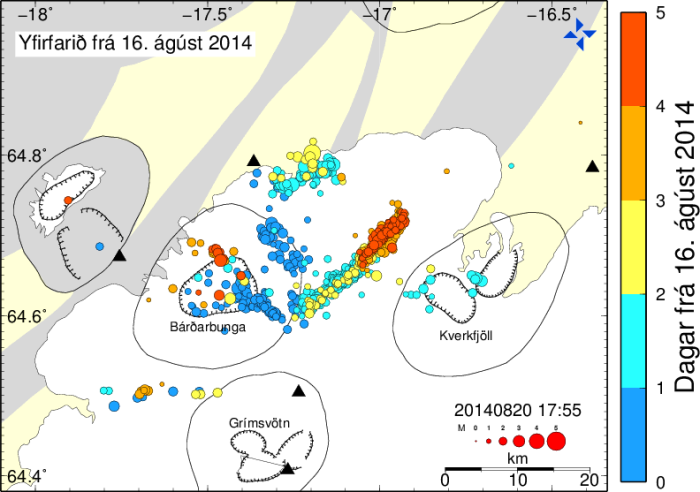 Image by Icelandic Met Office. Note how the magma moved out from Bárdarbunga down the radial fissure, and then make a sharp lefthand turn as it meets the Grimsvötn fissure swarm.

In the beginning there were two earthquake swarms. One happened at the Kistufell central volcano. We can leave that one be today. At the same time a small swarm happened inside the central volcano of Bárðarbunga that quickly moved into and along a radial fissure.

As the magma followed this radial fissure it went so far out that it encountered a new feature, the Grimsvötn fissure swarm. At that point the magma was injected into a more fertile ground and for pressure dynamic reasons it could not go towards Grimsvötn, instead it started to move further down stream of this new fissure swarm.

Now I just hope that Bárður and Grims baby will not take 9 months of birthpangs until being born.

I can’t stress strongly enough how surprised I am about this. It is the single biggest surprise in my volcanic days. It is surprises like this that makes life truly worth living.