Or at least not yet

The earthquake swarm at Bardarbunga is still ongoing. And we just saw an earthquake 5,3 but that has not been checked as i write this. (2:33 CET)

But other than the aviation code was set to red and flights have been detoured around Iceland there is no proof that an eruption, even if only a subglacial eruption has started.
IMO states a warning: There are no indications that the eruption is running under Dyngjujökli. Color code for the flight will remain red which can not be excluded that the eruption is imminent.

The warning will be kept up till at least noon on Sunday.

RUV shows a video were an expert states he does not believe even a small eruption has started yet: http://ruv.is/frett/expert-likely-no-eruption-yet 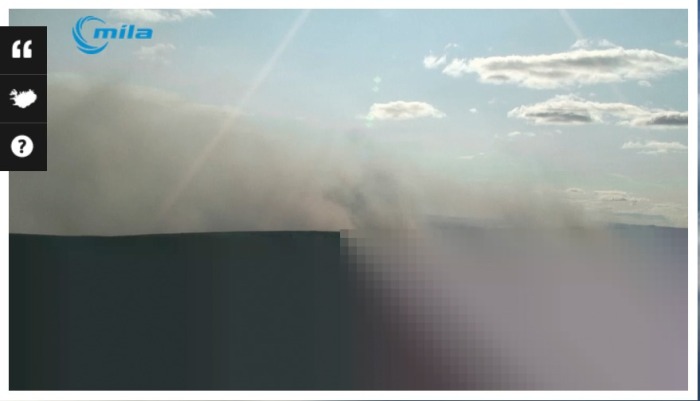 Sandstorm at the Mila cam Bardarbunga (1)

It took a lot of convincing by Irpsit, Islander and others till the crowd started to believe what they see on the Mila cam is a sandstorm and not steam or ash from an ongoing eruption.

Even though Carl published his post a little more than 12 hours ago, his post got 1k comments till now. He might not be available for some more hours and so i decided to sum up what the crew discussed. Many of them are far more an expert than me. I am just a volcanoholic who happens to be a dragon 😉

Cbus was the first to start…

Cbus: Anyone think this may be a false alarm?
Its not that I doubt IMO, they’re the pros here, but if this is an eruption starting from Dyngjuhals, shouldn’t we be seeing much more shallow earthquakes? Of the confirmed quakes in this area, we’re still seeing extremely deep depths (10+km). The significant development is that the swarm jumped 5km north in a very quick fashion.
As for the huge tremor spike, here is an easy explanation: After the swarm broke through a road block where it had been stalled at a length of around 25 km long, it finally expanded approximately 5 more kilometers in a very short time. This is where the current green stars come from on the map. But more importantly, once the rock was fractured enough to open the fissure, you get a tall fissure of magma traveling almost 5 kilometers in a very short time. That = tons of volcanic tremor. Now that the extension of that swarm has gone back to normal levels, the tremor has dropped.
Once again, not doubting that a small eruption has started, but I would have thought we should see more flooding / shallow quake activity if that were the case.

Looking at this image, the entire yellow section is new expansion that took place within a few hours. i just think maybe the crazy amount of noise that came when magma intruded into this dike set off the false alarms, although I wouldn’t doubt phreatic eruptions occurred as a result of magma intruding into this area.” 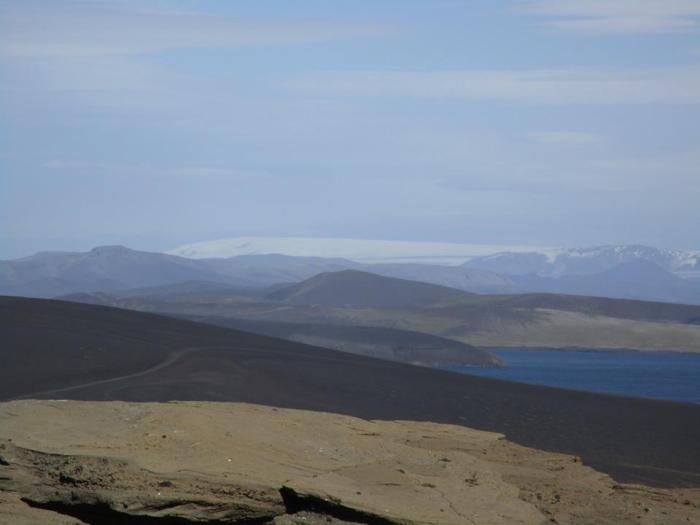 Bárdarrbunga as Irpsit drove near it last Tuesday, about 60km away near Jokulheimar and Hamarinn.
It’s a giant white dome, some 15km wide. 2000m altitude.

Irpsit:” I have a feeling that since every day the dike seems nearer the surface (10km a few days ago, 3km today), that a fissure eruption is going to start in just a couple of days from now.
Also I also see that every passing day the intrusion progresses northeastwards. Today the dike was just 3km away from the edge of the ice cap. At this rate, it will erupt partially outside of the ice cap, in ice-free land.
So my guess now is for a 10km long fissure eruption occurring in 2 days, part explosive/ash, part just lava fountains. Eventually, the tip of the fissure becomes a small shield volcano eruption, around 0.1-0.5 km3. Either that, or we will see this build-up for months and the episode is going to involve much larger volumes of magma, 1-10km3.
So far, we have seen a dike around 30km max. In Laki it was a dike around 70km or even more. We could get there of course, if this activity persists for weeks.
Still I think the region is more prone to a large shield eruption than a large Laki-like eruption. Just check the area and you find the historical/geological evidence.”

So, has an eruption started or is it about to start or …
No idea.. time will tell!
Geolurking shared some insights:
GeoLurking: A 4.7 in normal mode faulting has enough energy to open a fault face 3.2 km in width. That’s 1.59 km below and above the hypo center depth. At a 2 km depth, that would put the top of he fault plane at about 0.4 km below the surface. And about 3.5 cm wide, on average.
The surface manifestation of the quake could be about 2.19 long, if it reached the surface. The subsurface rupture length would be about 2.95 long.(Using Wells-Coppersmith)
The total area of the fault face would be about 9.64 km² and average 3.24 cm wide.

Image from Twitter which will help explaining what is where.

On the youtube live stream https://www.youtube.com/watch?v=xoISDUAPNgc a (lets be nice and call it) discussion started and we dragons are glad that happens on Youtube and not on VC. 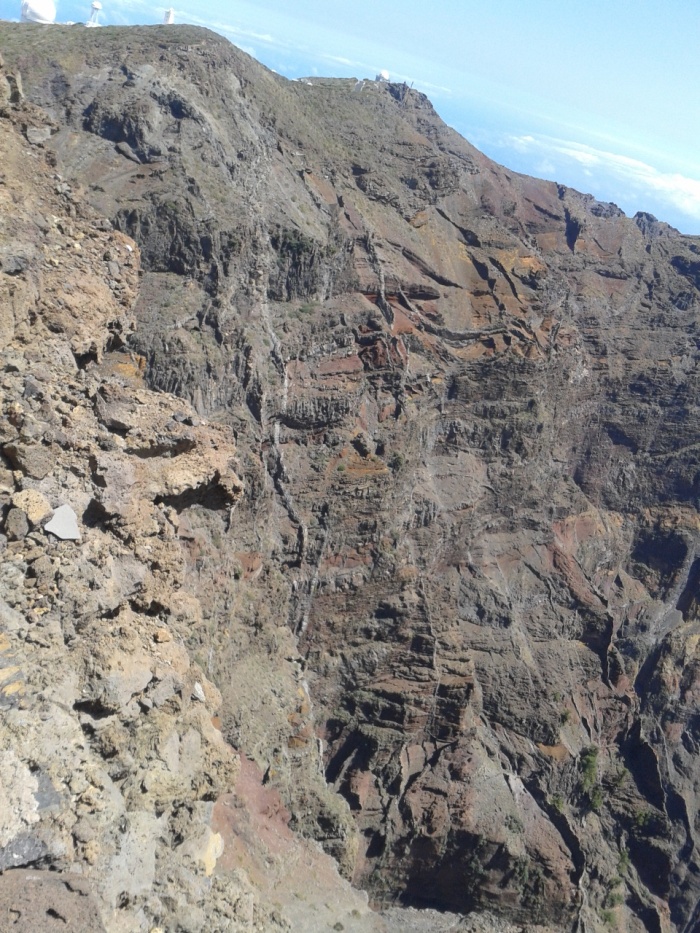 I took this image showing the inside flanks of Caldera de Taburiente La Palma today and thought i ´d share it so people can see what a dyke ( or a sill) looks like. Can you see the lines with differently colored rock. Earthquakes opened fissures and those were filled with magma. Erosion worked differently on rocks with different density. Now some of the lines stand out and are clearly visible
This shows what is happening deep under the glacier right now. ( Not the erosion, the intrusion 😉 )

Islander ( also called head of the imagery and flight department of the Vc institute 😉 ) flew over the region today and shot the following imaged especially for VC. All rights belong to him.

This is general overview of all Bárðarbunga north side face, involved in todays eruption alert is area in top center and towards Kverkfjöll in distance. Bárðarbunga Volcano is so HUGE it can not be caught in one photo unless its is wide angle (24 mm here). Shot from motorglider aircraft TF-SAA by Eggert Norðdahl, especially for VC, courtesy of pilot Dr. Ásgeir Bjarnason (Icelandic Gliding Club) steering. 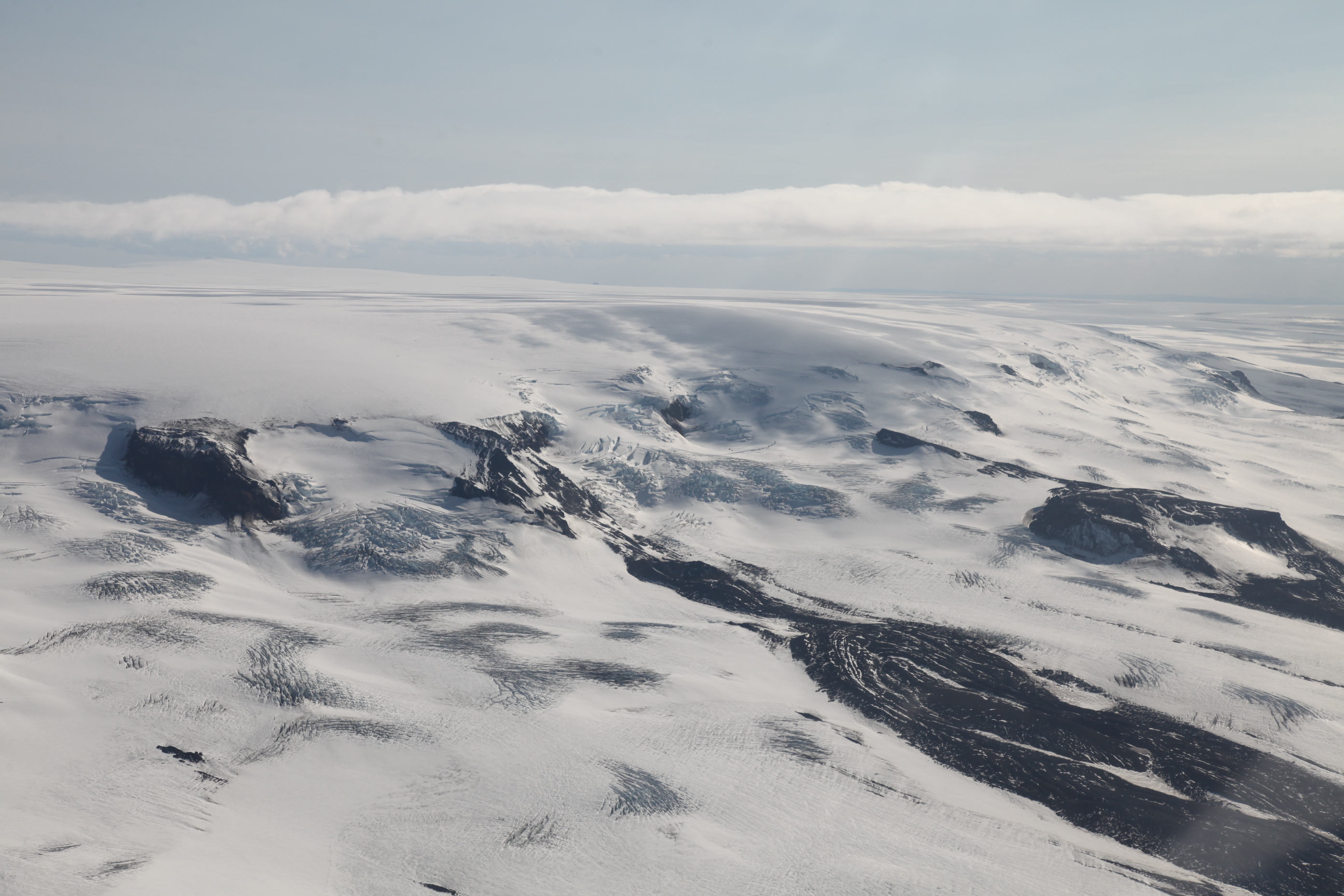 Screenshot from the Mila webcam Jökulsarlon

Thanks to all the commenters, without them i could not have written an update on the situation which causes so much interest.
Spica (devoted dragon but non expert)

Shows earthquake location and magnitude from August 16th to 24th – stops around 8h30 IMO time.
Magnitude scale is shown on the side.
The colorbar gives date and terrain elevation
Data is from IMO with a 98% quality filter.
Terrain data from NOAA etopo1 with icecaps.
Made with Gnu Octave

905 thoughts on “Bardarbunga eruption has started- Maybe NOT”