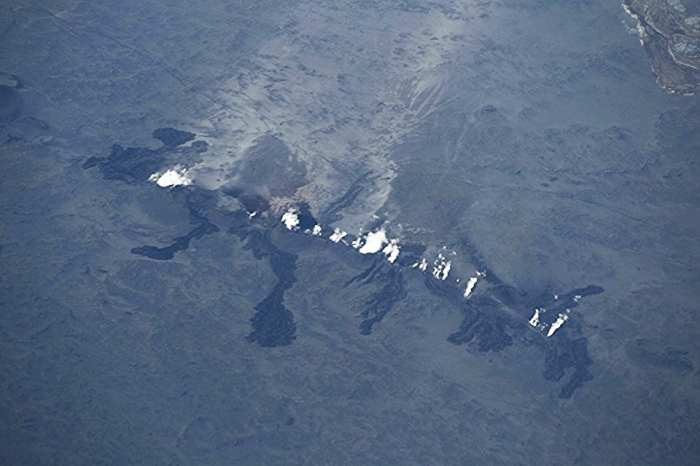 One of the more persistent reader questions is “What will/can happen now?”. I am pretty convinced that this question is what occupies most people on the inside of IMO, Allmannavarnir and NordVulk as well. The words of several eminent vulcanologists, that this episode is unprecedented, indicate that this may indeed be so. But in order to be able to answer that question, one must have a working model for how the MAR propagates in the area concerned.

I am not laying any claims to having solved it, stone tablet fashion, far from it. I only present a theory that does explain some of it, full well knowing that it could be – and will eventually be – proven wrong. 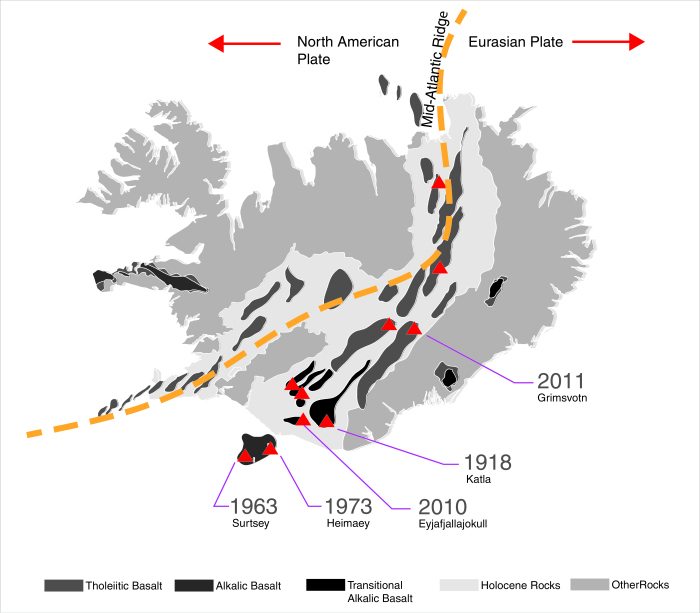 Schematic view of the Mid Atlantic Ridge as it runs through Iceland (www.chromographicsinstitute.com)

The key to how the rifting occurs is in my opinion the angle at which the North American and Eurasian plates diverge. If we divide the MAR as it runs through Iceland into zones of commonality we can identify just such areas.

Beginning where the MAR comes ashore at Reykjanes, the angle of divergence is very small. Four our purposes, let’s call it a 15-degree angle. In the Holocene (last 10,000 years or so), there have been several largish flood basalt eruptions, but the volcanoes of the area and the associated volcanic eruptions are generally speaking relatively small with one exception, the giant shield volcano of Hengill that marks the end of this area of commonality. 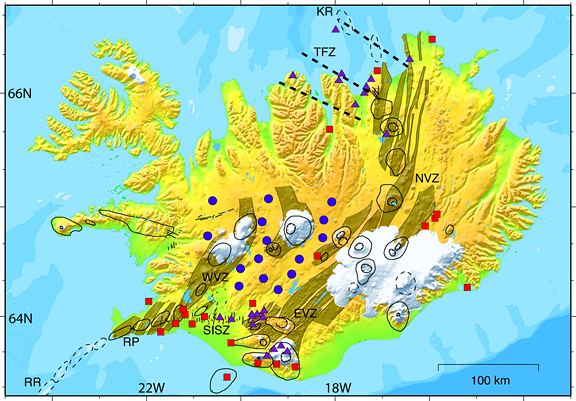 The MAR then runs North-eastwards and is labelled the WVZ, the West Volcanic Zone. The angle of divergence from Hengill to the volcanoes of Langjökull is 45 degrees. Just beyond Langjökull, the MAR then makes a 45-degree turn to run perpendicular to the base divergence or 90 degrees where it runs through the volcanic Hofsjökull area before rejoining the main rift at about the location of Tugnafellsjökull just west of Bardarbunga. Let me state immediately that I am not to keen on the WVZ really being the MAR. It is too long a junction, about 200 km as compared to the shortest route which is a mere 30 km. 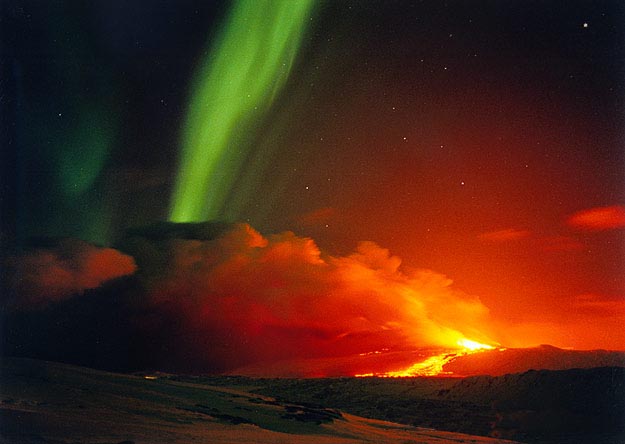 Hekla during eruption with Northern Lights.

Disregarding a few small volcanoes immediately east of Hengill is the SISZ, South Iceland Seismic Zone. At an angle of divergence of 0 degress we have the ideal conditions for the formation of a slip-slip graben, a zone of bedrock gravel, and this is precisely what we find. This zone ends about 10-15 km east of Hekla where the MAR takes off at a, call it, 30 degree angle. Hekla defies categorisation. It is a rift volcano with its own system of magmatic reservoirs that has fissure eruptions as well as plinian initial eruptions. But it is not just a rift volcano, it also is a stratovolcano and a shield volcano. The key to understanding Hekla lies in understanding its geological context and there may be no more than four people on the planet who do.

From Hekla there is a 30 km gap to Torfájökull and an additional 30 km to Katla. These two volcanoes, Torfájökull and Katla, mark the Western end of an area sometimes called The Dead Zone on account of its lack of seismic activity. In this area the rift runs at a 45 degree angle North-eastwards until it comes to Vatnajökull. Here is a combination of divergence and slip-slip which results in the gaps opening when the MAR adjusts are generally 40% greater than elsewhere. This area has hosted three major rifting event over the past 1,000 years or so – Eldgja in 940AD, Veidivötn 1477 – 80 and the Skaftár Fires of 1783-4. A quick look at satellite imagery such as Google Earth readily identifies this.

Going back slightly, we see that the proposed route of the MAR through the WVZ is approximately 200 km long whereas the gap between Hekla and Torfájökull is only 30 km. If we instead of the first insert an area of rotation, a microplate, then we have a perfectly good and much shorter “gap” in our model. To those with a deeper knowledge, this is the why and how of the so-called Hreppar microplate and its counter-clockwise rotation.

Leaving the current area of activity for the moment, we go north to Krafla and from thence out into the Atlantic where it transfoms into the Tjörnes Fracture Zone. This area is know as the North Volcanic Zone and is characterised by having large basaltic shield volcanoes such as Krafla and Theistareykjárbunga. A look at satellite imagery reveals that the area is overflown by several largish and very smooth lava flows such as the Mývatn Fires 1724–9 and the Krafla Fires 1975-84 which the Icelandic Institute of Earth Sciences calls “a striking repetition of what happened during the “Mývatn fires” in the 1720’s.”. Here, the divergence is at 90 degrees and the result is that the typical eruption associated with a rifting event is a medium-to-largish flood basalt eruption.

We can now, finally, return to the Eastern Volcanic Zone where the MAR makes a 135-degree turn at Bardarbunga-Grimsfjáll to run almost but not quite exactly 90 degrees to the direction of continental divergence. A look at satellite imagery identifies that this area is subject to multiple small-to-medium sized rifting events and ditto basaltic eruptions, exactly what we have seen over the past week or so at Holuhraun!

If we go back to the SIL tremor charts over the past week or so, there have been – as one reader points out – several such small albeit subglacial eruptions that coincide with each spike in the red tremor line. The reason we have seen nothing is of course, like at Katla in July 2011, that the energy released by each such eruption has not been anywhere near sufficient to melt through the approximately 400 to 800 metre thick Vatnajökull glacier.

Now, what is going to happen? Probably not much more or at least nothing much more dramatic than we have seen even if the current episode could go on for days, weeks or even months. This could of course prove to be “Famous Last Words” if the proposed model is very wrong (which eventually it will proven to be). But should the current intrusion hit and interact with a body of eruptible magma, then most bets are off.

We still have a great uncertainty at Bardarbunga central volcano itself where freshly intruded magma could be in the process of interacting with older but still eruptible magma, the end result of which could be a spectacular eruption of anything from Grimsfjáll 2011 proportions and up to and possibly larger than the 1980 St Helens eruptions where the former is far more probable. The second uncertainty is if the intrusion front will stop or work its way up to either Herdubreid or Askja in which case we could be in for visually spectacular but hardly devastating or catastrophic eruptions.

At the present time, the risk of any eruption that could have any effect other than the nuisance of precautionary alerts outside the local Vattnajökull area are very small indeed.