Since the appropriate Icelandic authorities have today publicly mentioned the possibility of a large, acidic and explosive eruption at Bardarbunga, we now feel free to inform you that this possibility has been discussed by the Dragons, behind closed doors, for well over a week. The key information comes from this official IMO graphic:

The first premise is that earthquakes do not occur in molten rock. Nor do they form a clearly visible ring shape such as the above except under one circumstance – they do so around a body of liquid, in this case magma. A conservative estimate places the size of this body of magma at 8 km diameter, height unknown but most likely on the order of 3 – 6 km, depth also unknown but relatively shallow. Using simple geometry, 4 x Pi x r3 / 3 yields a volume of ~250 cubic kilometres for a sphere, but for our flattened body something on the order of 125 – 140 cu km. 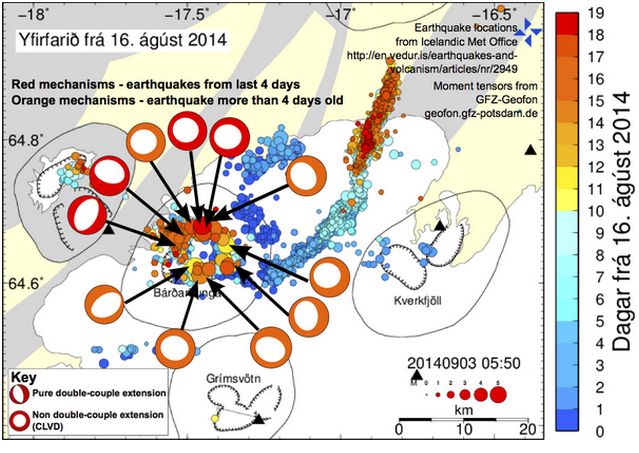 Base image by the Icelandic Met Office showing the “beach-balls” of the likely ring-faulting, compiled by Stephen Hicks  @seismo_steve

The important question is not how much magma there is but rather how much of this magma is eruptible. The answer must be “not that large a fraction” as otherwise, Bardarbunga would most likely already have exploded. At this stage a guess would be no more than perhaps 10% or some 10 – 15 km3. Also, in almost all eruptions on land, perhaps no more than <40% of the eruptible magma actually erupts. That still leaves us with a potential eruption of several, possibly as many as 5 km3.

Another hugely important factor is the content of volcanic gases, above all humble H2O as this is what determines how explosive the eruptible magma is. Again, we most likely have a favourable situation. To judge from the magma erupting at Holuhraun, the content of SO2 is exceptionally high at as much as a cubic metre per ton magma. But the magma does not contain much water at all, hence the magma within Bardarbunga most likely does not as well. Any explosive eruption at Bardarbunga would probably not be highly explosive on its own.

But there is one exacerbating factor and that is the presence of almost unlimited amounts of water in the shape of the Vatnajökull glacier. If it finds its way into this magma reservoir should an initial explosive eruption remove the roof or lid off the magma chamber, it will result in more and very large hydromagmatic explosions to follow after an initial eruption. Whether we will actually see such an eruption is highly uncertain, but if we do, there is little chance of it being larger than, at most, Pinatubo in 1991 – in spite of the staggering numbers involved.

While we regret that we did not make these very interesting speculations available ten or more days ago, we hope our readers will accept and sympathise with our reasons for not doing so. Now that the appropriate Icelandic authorities have, so to speak, “let the cat out of the bag”, the reasons behind this voluntary restraint on our part are no longer valid.

IMPORTANT NOTICE:
Only the IMO and the Allmannavarnir can issue volcanic warnings and only London VAAC can issue Flight Warnings.

WARNING:
We know a few wish to go there right now.
But, remember to stay on the where the wind is not blowing, this is a very gassy eruption high in SO2. Even one breath of the exhaust would kill you.

This article is obviously an extemporization upon one possible scenario. It is not a representation of the most likely scenario. With that being said, we have tracked the ring encirclement of what is now deemed to be a shallow magma chamber that was not previously known to exist. We will at all times take us the right to write and publish articles upon scenarios. These articles will always be based on fact and science as it is understood today. Our view and our articles might shift focus depending on the interest of the individual writer and the current level of knowledge.

But rest assured that any scenario we publish is based on data at hand and on scientific explanations of it. We at Volcanocafé think that we have proven this time and again. After all, that is why we chose to write about the area in such detail months prior to the eruption. We did though not write about what we thought was an upcoming eruption until the last possible hour since we awaited for IMO to publish something. In the end I wrote and published the “something is going on” article a few hours prior to eruption without IMO giving a heads up. But before that the discussion had been going for a couple of weeks about it.

In the end we where the first to see it coming, we were the first to write that it would most likely cause an eruption, and we also published articles on what we are seeing currently prior to it happening. In light of that we now feel that the time has come to openly say that there is a small chance that a larger explosive eruption could occur at Bárdarbunga in light of new knowledge. In this case we awaited the IMO and the Icelandic University to lift the lid first.

We do not do scaremongering, we do science and scientific debate.