Amidst the truly spectacular images, the “eye candy”, currently reposted on our FaceBook account, on Twitter and on here by our readers, three possible scenarios emerge. Professor Magnús Tumi Guðmundsson, professor of geophysics at the University of Iceland´s Institute of Earth Sciences and the foremost Icelandic expert on subglacial eruptions outlines the three following scenarios:

1) The eruption at Holuhraun stops and with it the depletion of the magma reservoir of the Bardarbunga system also stops.
2) The eruption at Holuhraun continues as does the depletion with an accompanying subsidence at the Bardarbunga caldera. (As this goes on, the risk of possibility #3 increases, our note).
3) The deflation reaches a critical point where part of the roof of the Bardarbunga caldera collapses which allows water, liquid or in the form of ice, to interact directly with the magmatic main body. (This will lead to a series of very violent explosions which will only stop when either the body of water/ice or the body of magma are exhausted, our note).

“But the third scenario is that the subsidence in the floor of the caldera causes an eruption within Bardarbunga. Such an eruption could melt a large volume of glacial ice, and could end up as a powerful explosive eruption, with ashfall,” says Magnús Tumi Guðmundsson. “The meltwater would perhaps not be released immediately, due to the contour of the caldera, but eventually it would come out as a powerful flood. Obviously, we are worried about this possibility.”

In a series of interesting tweets, Gisli Olafsson, Emergency Response Director at NetHope, an organisation that “enables humanitarian organizations to better serve the developing world through smarter use of technology”, says that according to scientists, we have had seven eruptions so far. Three in Holuhraun, three under Dyngjujökull and one south of Bardarbunga.

According to Icelandic News Service RUV (the same story is also carried by the MBL, Morgunbladid), the director of the Civil Protection Agency in Iceland, Almannavarnír, Vidir Reynisson is “Gravely concerned” about Bardarbunga as the subsidence is thought to increase the likelihood of an eruption. From the Allmannavarnir’s perspective, the resulting glacial flood formed in such a scenario is the major concern as according to projections, it could reach Húsavik on the North coast of Iceland in as little as 5 to 6 hours.

The Northern slope of Bardarbunga. Rocky outcroppings such as these are occasionally visible in the Mila webcams and cause a lot of questions to be asked.

If we assume that the glacier in the caldera is a perfect cylinder (it is not) 10 km in diameter, that’s approximately 63 cubic kilometres of ice which if all was melted at once (which it won’t), would result in approximately 57 cubic kilometres of water. That is a substantial amount of water which, if instantly released and evenly distributed, would cover England and Wales to a depth of about 0.45 metres or 18 inches! Note – this is a very rough estimate.

Very high concentrations of sulfur dioxide were measured at the eruption site today. Peak values were up to almost 2600 micrograms per cubic meter at Reyðarfjörður, which is by far the highest value ever recorded in Iceland. Consequently, a warning was issued for the town of Reyðarfjörður downwind, advising people to stay indoors as much as possible, especially children and the elderly. Healthy adults should not perform strenuous physical activities outdoors. The clouds of SO2 emitted by the Holohraun eruption may have been perceived by smell in Norway yesterday and have reached as far away as Northern Siberia at longitude 120 degrees East according to NASA surveillance. At times, local concentrations of SO2 are so high that they force an involuntary, temporary evacuation of the scientists from the base camp at Vadalda. Also, servicing involving refuelling (diesel) of our beloved “R2D2” Doppler radar seems to have been undertaken, much to the delight of our viewers who now report it happily blinking away in its lone vigil. 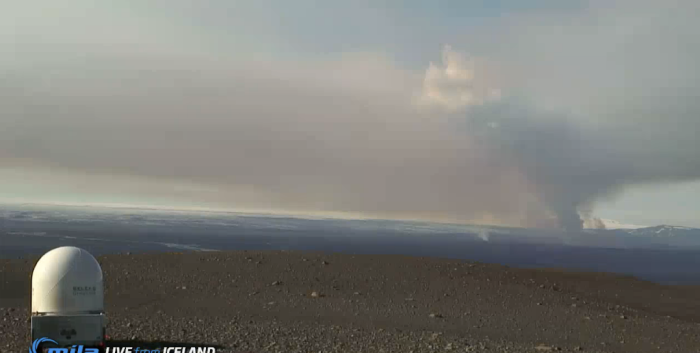 One aspect of the current unrest and ongoing eruption of the Bardarbunga system that is conspicuous by its absence is the implications of the current activity on the nearby Grímsvötn central volcano only 50 km to the south. This volcanic system had its latest eruption in 2011 and has since then re-inflated surprisingly rapidly. A possible previous interaction of the two systems resulted in the 1996 eruption of Gjálp, so the question is twofold. First, could the current activity at Bardarbunga have implications for Grímsvötn? Second, could activity at Grímsvötn have implications that would exacerbate the activity at Bardarbunga? At this point in time, such musings are purely hypothetical.

It is also with great pleasure we note that VC now has several members conversant in French. Bienvenu! La diversité est une très bonne chose – but please remember that the common language of this blog is English, even if the odd interchange in another language is tolerated! Finally, a request. Please try not to post animated gifs! They slow down the loading speed of VC for people accessing the site via pads or mobile connections are not really necessary. On Fridays, once the Sheepy Dalek has opened, they are welcome as Friday evenings is our Silly Hour. Thank you!

IMPORTANT NOTICE:
Only the IMO and the Allmannavarnir can issue volcanic warnings and only London VAAC can issue Flight Warnings.

WARNING:
We know a few wish to go there right now. But, remember to stay on the where the wind is not blowing, this is a very gassy eruption high in SO2. Even one breath of the exhaust could kill you, so please respect any and all warnings from the appropriate Icelandic authorities!