Whenever a new post is needed in a very short time and it is not supposed to last for very long till it will be replaced, I try to sum up what happened the last days and what our commenters had been bringing to the blog. And it would be a shame to miss those images and links.

Mike Ross graced us with a really amazing image. I saved it to this post so it is not lost amoung thousands of comments. All rights belong to Mike of course. And he also presented us an image of our beloved Mila Cams:
Mike Ross (@eruptionchaser) September 12, 2014 at 00:58
You’ve all been watching the Mila cams… here’s what the view looks like from the other side 🙂 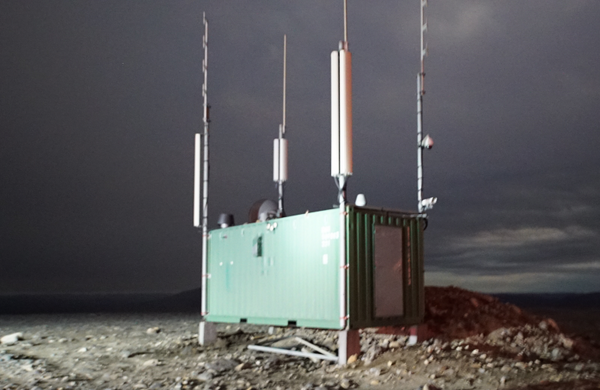 (Cameras are on the pole to the right)

Weemad found a video shot with a drone on Facebook. Overflight over the fissure eruption.

And the Stone tablet. The last Update presented by IMO:
12 September 2014 11:30 – from the Scientific Advisory Board

Conclusions of the Scientific Advisory Board of the Icelandic Civil Protection:
The eruptive activity at Holuhraun continues at similar intensity. Lava flows at similar rates as yesterday. The lava is flowing towards East into Jökulsá á Fjöllum, slightly narrowing its path. No explosive activity due to the lava and river water interaction has been observed, but steam rises from the lava.

Scientists flying over the Bárðarbunga area yesterday reported no new changes in the surface.

Air quality in urban areas in the East of Iceland:
Forecasts indicate that high concentrations of sulphuric gases may be expected in the northern part of the Eastern fjords, Fljótsdalur, Hérað, Jökuldalur, and Vopnafjörður. Forecast indicates that concentration may become highest in Hérað later today. High concentrations could occur in other areas as well. The Environment Agency will set up new monitoring stations in Akureyri and in South Iceland today. Geographical conditions must be considered when estimating air quality. People who feel discomfort are advised to stay indoors, close the windows and turn off air conditioning. Measurements of air quality can be found on the webpage loftgaedi.is. The Meteorological Office issues forecast on its web-page and warnings if conditions change to the worse.
Instructions from the office of the Chief Epidemiologist and The Environment Agency can be found on their web-sites.

GPS observations:
There are minor crustal movements around the dyke supporting the assumption that the amount of magma flowing into the dyke slightly exceeds the flow of magma erupted to the surface.
Considering the time period since the beginning of the eruption slow movements towards the Bárðarbunga caldera indicate continuing subsidence of the caldera.
A new GPS station was installed on top of Bárðarbunga yesterday to monitor the subsidence of the caldera floor.
Three scenarios are considered most likely:

From the Icelandic Met Office:

The Aviation Colour Code for Bárðarbunga remains at ‘orange’ and the code for Askja is ‘green’.

takk108 found an article with 11 stunningly beautiful images: http://mashable.com/2014/09/11/iceland-bardabunga-volcano-eruption-photos/#:eyJzIjoiZiIsImkiOiJfY2Qxbzc1MnB4bG1uc213aCJ9
And the last link:
Bringing this over from end of last post as it’s just too nice (and ‘merci’ to Shérine for finding it)

Another set of great photos here. Nice to see another view (from the glacier !!)

(click on the pic to launch the link, and scroll through for some more)
There is a new item up in the menu RIDDLES https://volcanocafe.wordpress.com/riddles/
Explanation for Newbies to the blog:

On Volcanocafe most fridays we open the bar and have a set of riddles.  Different dragons put up riddles over the years. At the moment our Riddle Master is Matt but he will be assisted by Kilgharra. Normally 2 points are handed out when a riddle was solved straight away and 1 point when a clue was necessary. When a riddle was solved the Riddle Master or another dragon on riddling duty will shout DING!

As long as the blog sees a LOT of traffic now, it is hard for the Riddle Master to find correct answers with thousand or more comments, so we decided to try something new. This page is shown in the menu. We ask our competitor to post their answers right below this page. Answers in the main thread will not count even if they are correct. ( Answers on a page do not show up in recent comments.)

The queen of riddling has been Sissel and you Newbies will have a hard time beating her, but you will be amazed where your search on the net will lead you to. One finds lots of interesting or funny things while trying to active a black belt in Google Fu. The prize are just point but don´t forget the honor and the fun. So join in. Let this weeks fun begin.

One “old” riddle still remains unsolved: old #1 which already has a clue appended.!

This week you may find four volcanoes and one geologic feature in Matt´s riddles. As always, 2 points are awarded for each answer, 1 point after a clue is given. Good luck!

2) I played a role in the American civil rights movement, but nobody knew about me at the time!

3) Important in both world war 1 and world war 2, it destroyed its namesake twice during the 20th century.

4) The first visitors to this uninhabited island captured the president in the war of 1812.”

5) “The fake base kept the enemy from invading… you might say it was this:

That week the answers to Matt´s riddles: there are three volcanoes, one volcanic feature, and one volcanic term. 2 points are awarded for each correct answer, 1 point after a clue was given.

#2 In the country where coffee got one of its names, this was the only one to erupt during the 20th century. 2 points Espadrille Harras of Dhamar in Yemen. With Saana’s harbour Mocha as the name for coffee

#5 This volcano of water once destroyed a capital. 2 points Sissel Volcan del Aqua
pop Score board

this is the summary from august 16th to today about twelve.
mag is over 2.5 to get a cleaner view. I have set the upper latitude higher to get the activity around Herdubreid. Color of dots os according to date (see colorbar left). Terrain is on the colorbar right. Size of dot is proportional to magnitude (see blue scale on one side). A big Tak to IMO for the data quality. and to NOAAfor the terrain.ook at the title bar for more information (date, hour)

First view is from the north west, then the top, and 2 rotating view with all events.

Made on Gnu Octave.
dfm