It does not take long for a newcomer to volcano-watching, if we are to call our hobby that, to come across the term “caldera”, cauldron. The term is very loosely used to describe large volcanic depressions ranging from volcanic craters a few hundred metres in diameter up to the huge depressions left behind by the very largest volcanic eruptions that may approach 100 km in their greatest extent. Consciously or subconsciously, there is always a sensationalist undertone evoked in the reader when the term caldera is used, so what is a caldera?

The archetypal caldera is Yellowstone. For many decades, scientists had realised that Yellowstone was a large volcanic feature with its geyser fields, tuffs and lava flows, but where was the volcano? There was no sign of it! It wasn’t until the advent of Space flight and high resolution orbital photography that the truth was finally realised: Yellowstone and its major explosive eruptions were so huge that the volcanic scars left were too large to leave a recognisable volcano behind. Almost wherever one is in Yellowstone National Park, one is standing on top of the volcano. Let us just add immediately that the vast majority of its volcanic or volcano-related eruptions are nowhere near huge, that there is no periodicity to the largest, caldera-forming eruptions and that Yellowstone is in no way “overdue”, whatever Michio Kaku or Steve Quayle may say. 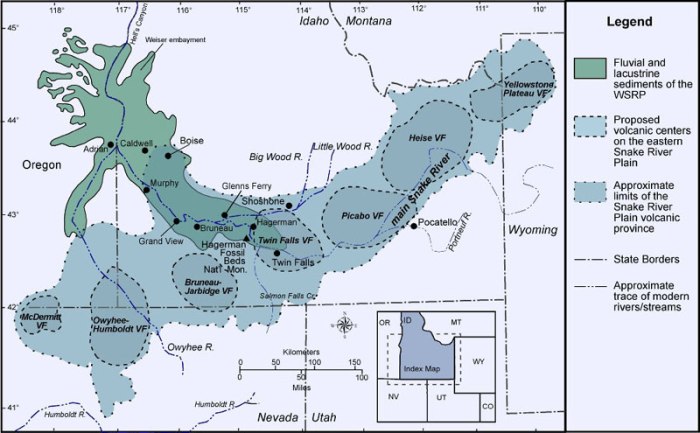 With this epiphany, the scars left behind by several more such very large eruptions were identified. West of Yellowstone running through the state of Idaho and cutting a swathe through the Rockies lies the Snake River Plain, a trail of at least seven calderas left behind by several ultra-colossal (VEI 8), nowadays sometimes referred to as apocalyptic eruptions, and mega-colossal (VEI 7) eruptions dating as far back as 16 million years as the North American plate travelled over the Yellowstone hotspot. It can be traced back to the Columbia River Flood Basalts in Oregon, a large igneous province formed over a period of 10 – 15 million years and most vigorous 17 – 14 million years ago that deposited some 174,300 km3 over an area of 163,700 km2 with a maximum thickness of over 1.8 km. This is not the only area in the USA where such eruptions have occurred. Long Valley in California was home to a mega-colossal VEI 7 eruption about 760,000 BP. The Valles Caldera, New Mexico, was formed by two VEI 7 eruptions some 1.15 million years ago. What has long been regarded as the largest eruption ever identified is the massive VEI 8 eruption of 27.8 million years ago that formed the La Garita Caldera and Fish Canyon Tuff in Colorado.

Interesting though the American caldera-forming eruptions are, they are not unique, nor are they the most interesting. The Atana Ignimbrite eruption (VEI 8) that formed the Pacana Caldera in Northern Chile some 4.0 million years ago was as large as the largest of Yellowstone’s eruptions. Lake Toba in Sumatra Indonesia was even larger, occurred as recently as 74,000 BP, and is somewhat controversially linked to a bottle-neck in the human genome. If true, the Toba Catastrophe Theory claims that as many as 60% of all humans on Earth at the time could have perished. The 74,000 BP Toba Eruption was preceded by at least one other VEI 8 and two VEI 7 eruptions dating as far back as c 1.2 million years. Subsequent to the most recent eruption, a resurgent dome, Samosir Island, has appeared. 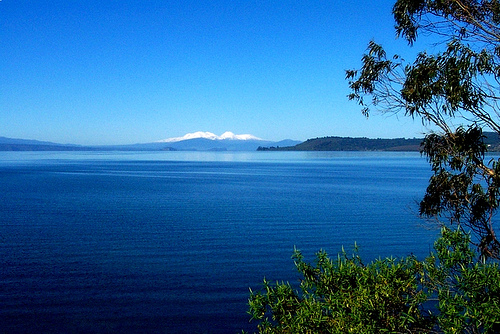 Beautiful Lake Taupo, New Zealand. The only hint of its volcanic origin are the distant volcanoes on the horizon, built at the edges of the ring fault system. (Provenance unknown)

No disrespect to the USA, but the undisputed World Champion of ultra-colossal and mega-colossal eruptions is the Taupo Volcanic Zone located on New Zealand’s North Island. Over a period from 280,000 BP to as late as 1,800 years ago, the TVZ has seen no less than two VEI 8 and five VEI 7 eruptions. The latest of those two are the Oruanui Eruption (VEI 8) 26,500 BP and the Hatepe Eruption (VEI 7) 1,800 BP of Lake Taupo.
Other recent mega-colossal eruptions that formed large calderas include the 3,600 BP civilisation-destroying eruption of Thera (Santorini) from which we have derived words such as “terrible”, “terrific” and the Tera of terawatt/terabyte as well as the legend of Atlantis. It may well be mentioned in the Biblical description of the Plagues of Egypt. Two further recent such eruptions are the Kikai Caldera, Ryukyu Islands, Japan (6300BP)and Macauley Island in the Kermendec Islands, New Zealand(6,300BP) eruptions. In addition, there have been two recent VEI 7 eruptions that did not lead to a caldera collapse even if the huge summit craters, partially the result of collapse, are often referred to as “calderas”, by scientist – Mount Baekdu/Changbaishan (969 AD) North Korea-China border and Tambora, Sumbawa Island, Indonesia (1815 AD) that caused “The Year Without a Summer”, 1816.

These very largest of volcanic eruptions begin with an initial eruption that removes a sufficient amount of magma that the ~5 ~ 10 km thick roof over the magma reservoir begins to buckle and drop. This forms a series of concentric ring fractures which eventually begin to erupt after which the now unsupported roof collapses into the magma reservoir leading to the major and usually tuff-forming ignimbrite eruption which partially fills the caldera. Later eruptions and erosion further fills in the caldera and intrusions thousands of years later may cause a resurgent dome to emerge near the middle. Note that neither Baekdu nor Tambora fit this pattern for caldera formation very well as the progenitor volcanoes survived!

In comparison to these giant scars, often tens and several tens of kilometres in extent, it seems ridiculous to refer to the 1½ km wide, shallow summit crater of Iceland’s Eyjafjallajökull, a volcano that gently spews out no more than some 0.1 cubic kilometres or so over a period of months with its eruptions, as a “caldera”, but unfortunately even scientists do in serious academic papers.

But the very large, ultra- and mega-colossal, eruptions are not the only eruptions to form collapse calderas. In addition to this, there are relatively speaking smaller eruptions that form them, mostly from the colossal VEI 6 eruptions. The most recent such example is the 1912 VEI 6 Novarupta eruption when the magma reservoir under the Katmai volcano, Alaska, emptied through a new vent well to the side of the volcano to form the “Valley of Ten Thousand Smokes”. Over the next few years, much of the edifice of the Katmai volcano collapsed into the emptied magma chamber to form a 3 x 4½ km summit caldera.
A better known and researched caldera-forming eruption is that of Mount Mazama (7,700 BP), Oregon. This followed the pattern of a ring fault forming followed by an eruption at the ring fault and the collapse of the volcanic edifice into the relatively shallowly located and emptied magma reservoir. The caldera has been filled with water to form the 8.0 x 9.7 km diameter Crater Lake and, in contrast to the non-eruptive resurgent domes of very large calderas, subsequent eruptive activity has built a central cone, Wizard Island. 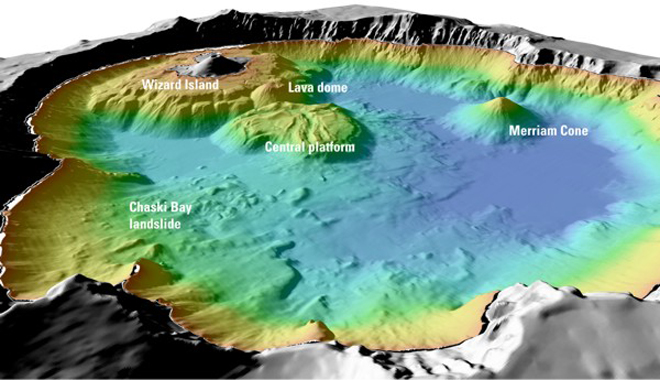 Calderas such as these are plentiful. Europe alone, perhaps not noted for great volcanic eruptions, has several; Laacher See in Germany, Vulsini, Colli Albani, Roccamonfina in Italy, the Rodalquilar Caldera complex in Spain to name but a few. In addition there are several ancient ones such as the caldera complex upon which Oslo, the capital of Norway, is built, Mount Snowdon & the Lake District, UK, etc. etc.

But there is one type of caldera that defies the traditional description and which is impossible to tie down to a single, specific event and that is best exemplified by the large Icelandic calderas of subglacial origin, i.e. Katla and Askja. While it is thought that the calderas of both Torfájökull and Tindfjallajökull are the result of single large, possibly VEI 6 eruptions, some 50-70,000 years ago, those of Katla, Askja and the volcanoes below both Hofsjökull and Langjökull are much harder to explain in those terms. The calderas of both Askja and Katla are far larger than can be explained by eruptions known to have occurred from analysis of ash strata. Both volcanoes seem to be limited to no more than medium-sized VEI 5 eruptions whereas in both cases, at least a low-end VEI 7 – which we know never has happened – would be required to produce their large calderas. It is here that what we are now seeing at Bardarbunga might have a bearing.

Aerial photograph of the sub-glacially formed Askja volcano with its large caldera containing the nested caldera of Lake Öskjuvötn, which resulted from post-eruption collapse following the volcano’s 1875 VEI 5 eruption (RUV)

That Bardarbunga is now undergoing a collapse event is beyond question. Furthermore, to judge by previous eruptions in the area emanating from or involving this central volcano, this is not the first such time in its history. Until this eruption started, the caldera as shown on the IMO maps was significantly smaller but was enlarged to its current extent by human reinterpretation. The collation of earthquake data by VC-reader Albert strongly suggests that a collapse event is happening at the N to NNW margin of the newly defined caldera where the data indicates that the deep magma reservoir extends beyond the limits of the “rescheduled” caldera. If this continues, the caldera will eventually be enlarged in this direction.

If this is indeed what is currently happening and has happened before, we may have obtained a vital clue as to how and why the Icelandic subglacial calderas defy the correlation between the size of the caldera and the eruptions that formed them.