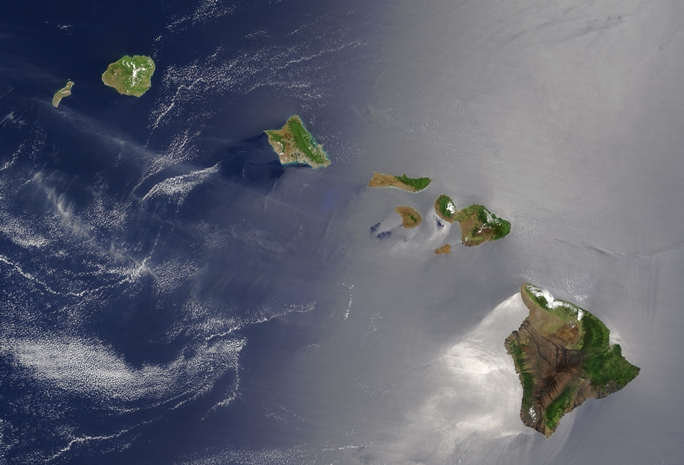 Kauai is the oldest of eight major Hawaiian Islands at some 5.1 MY. It sits some 170 km to the west of Oahu. There is a much smaller island called Niihau which sits some 28 km to its west. The rest of the string of Hawaiian Ridge islands and Emperor Seamounts stretch to the west and north from Kauai.

The island measures some 1,450 km2 and hosts a population of just over 67,000 per the 2010 census. As with the rest of the Hawaiian Islands, it sits under a belt of strong trade winds that bring abundant moisture along with the occasional hurricane. As such, it hosts lush rain forests, a major swamp and has for the most part a very wet, tropical climate, at least in the eastern and central upwind parts of the island. The northern coast is pounded with significant wave action out of the North Pacific, not unlike the north coast of Oahu. Wave action and precipitation are busily eroding the island back into the Pacific.

Kauai is one of the wetter places on Earth. Average precipitation in the lower elevations is in the 120 – 250 cm/year range. Places in the upper elevations have measured between 880 – 1,200 cm/year, all of which will move a lot of mud into the ocean over a short period of time.

The Hawaiian Islands proceed through four phases of volcanic activity. From Volcanism in Hawaii:

Currently, the only Hawaiian volcano in the preshield stage is Loihi, off the southeast coast of Kilauea. This stage also emplaces some 95 – 98% of the total mass and volume of the island.   http://pubs.usgs.gov/pp/1987/1350/

As with the rest of the main islands of Hawaii, Kauai is composed primarily of a central shield volcano which built the island from layered basalt flows starting some 3.7 km below the surface of the waves. Like the other larger islands, Kauai has also had at least three and perhaps four major flank collapses, the largest ones being north and south which put up to half the original volume of the original island on the ocean floor, and a smaller one on its southeast side that did not put debris on the ocean floor.

The volume of the volcano above the surface of the ocean is thought to be over 4,100 km3 and its early rate of growth and evolution have been compared to that of Mauna Loa on the Big Island.

The highest point on the island, Kawaikini Peak is some 1,600 m above the waves. It is helps bound one of the largest calderas on the islands, measuring some 16 – 19 km across. There was more than one caldera collapse which was refilled by subsequent lave flows. The calderas were not formed by explosive eruptions. Rather they appear to be formed by subsidence much like what we see on the Big Island and certain Icelandic volcanoes. http://www.hawaii.edu/environment/ainakumuwai/html/ainakumuwaiislandformation.htm

A 1960 publication of the Hawaii Division of Hydrography entitled “Bulletin 13 – Geology and Ground-Water Resources of the Island of Kauai, Hawaii” gives an old school view of the basic geology of the growth of the island. Note that it was published a generation before the notion that massive landslides were part of the history of the Hawaiian Islands and misses those physical processes, describing the landslide effects as various versions of late volcanic activity. However it is a pretty decent description of the growth and construction of the island over time. http://pubs.usgs.gov/misc/stearns/Kauai.pdf

There was a long and vigorous argument about how many major shield volcanoes formed Kauai. As it turns out, study of gravity anomalies under the islands published in a 2010 paper indicate that there were two major volcanic centers. The first was located between Niihau to the west and the second and younger center of activity is the center of Kauai itself. This means that Niihau, which is now privately owned and populated by some 250 Hawaiians, is the remnant of the first volcano. It appears to have suffered a significant flank collapse to the east some 5 MY ago as eruptive center of activity moved to the vent that would eventually build Kauai itself. http://www.soest.hawaii.edu/GG/FACULTY/ITO/Reprints/Flinders_etal_JGR10_Reprint.pdf

The remaining eastern portion of the initial edifice and the debris field of the collapse were inundated and covered by lava from the vent that became Kauai. The same erosive forces that removed the older island are now at work on Kauai itself. http://raisingislands.blogspot.com/2012/12/kauai-geology-nothings-where-you-think.html

The most massive part of Kauai is called the Napali formation. It is essentially constructed out of thinly layered olivine basalt lava flows sloping a few degrees down from the central vent. The formation is built from the ocean floor to the top of the caldera rim. The layers are thinly overlain with soil and occasional ash and tephra. As this was primarily a basaltic volcano, the source of the ash and what little pyroclastics exist were very likely the interaction between magma, wet soils and massive water load carried by the island. Ash and pyroclastics constitute less than 1% of the volume of material found in the Napali. This formation is completely permeable to water, which flows between the lava layers.

Total time to build the island was estimated based on the observed flow rate out of Mauna Loa between 1850 through 1940. Estimates range from 175,000 – 800,000 years, with the most recent estimates on the short side of that range for this and the other Hawaiian Islands.   The layering is easily seen along the cliffs that bound most of the island. http://www.hawaii.edu/environment/ainakumuwai/html/ainakumuwaiislandformation.htm

Toward the end of the shield building phase, there occurred a series of faulting, caldera and graben formation. Lava continued to flow and its formations changed from thin flows to massive, thick ones. This is referred to as the Olokele formation and exists primarily in the northwestern part of the island centered to the west of the caldera.

The Olokele is thought to have filled the caldera with lava which then overspilled and filled a few deeply cut valleys to the northwest. There were discontinuities toward the end of the valley and the lavas pooled, creating a rather flat area with a water-impervious floor. This area eventually became the Alakai swamp due to both its relative flatness and lack of drainage through the thick lava formation underlying it. Older studies suggest that the source of the lava is poorly known, though it appears to come from the same vent that built the entire island. Although not mentioned in any of the papers I was able to find, I would expect this time also saw the major flank collapses off the north and south coasts of Kauai as the island was no longer growing. 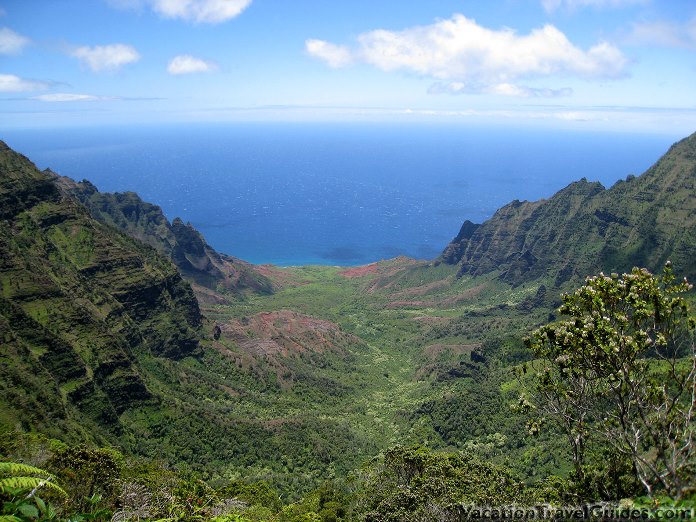 The formation of the Olokele also confused early geologists who initially believed the entire area filled with the thick lava formations was the caldera itself. The presence of breccias in the filled caldera between the Napali and Olokele was misinterpreted in early papers as evidence of significant explosive activity creating the caldera.

There is only a single flow associated with post-shield activity on Kauai.

The two major flank collapse landslides appeared to take place shortly after the island grew to its largest size some 5 MY ago. They removed half the above-water area of the island. These sorts of landslides are common in the Hawaiian Islands, as evidenced by some 70 flank avalanches littering the ocean floor along the eight largest islands. The Big Island already has over 12 described in various places. I would expect more in the future. http://walrus.wr.usgs.gov/reports/reprints/Moore_JGR94.pdf

The interesting part about the Kauai slides are that runout calculations indicate that the island itself must have sat some 900 m higher above the waves at the time of the flank collapses than it currently does. We have observed how the Hawaiian and Emperor chain subsides over time, with newer islands topping out at some two kilometers above the ocean and the very oldest some two kilometers below its surface. 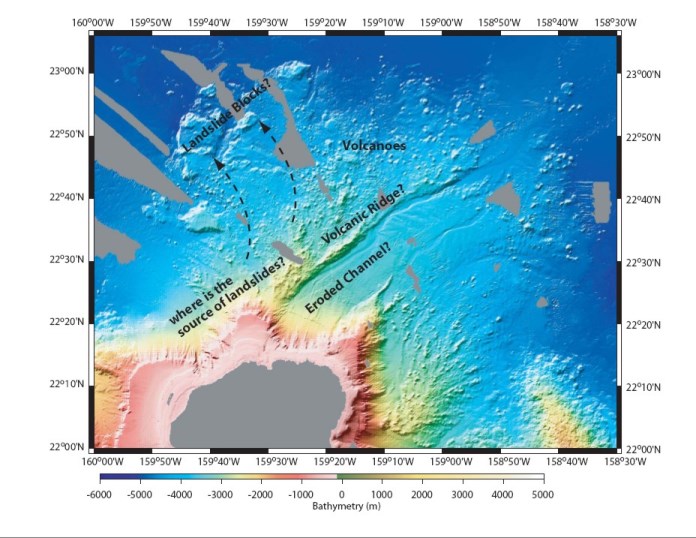 About 3.5 MY ago, part of the original central shield volcano cone collapsed to the east. The slump to the east is referred to as the Lihue Depression. 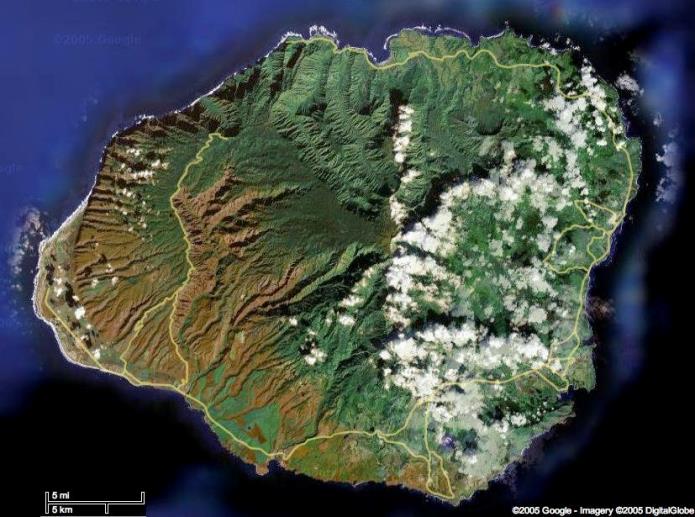 Lihue Depression is under the eastern cloud layer.

At this point volcanic activity mostly halted for a 1.5 – 2 MY before resuming as the Koloa Volcanics some 1.5 MY ago. The Koloa are Rejuvenated alkalic eruptions which represent the final active phase of Kauai. Lavas and other eruptive materials from the Koloa also pooled in the Lihue Depression / Lihue Basin.  http://www.geo.arizona.edu/~reiners/Lihue.PDF

Much like previously seen in our three articles on Oahu, the Koloa Volcanics are characterized by basaltic lava flows, cinder cones, a small shield volcano, and numerous dikes. There is also ash and cinder (lapilli). Some 10 of perhaps 40 vents have been identified on the eastern part of the island. The activity concluded some 500,000 years ago. https://www.soest.hawaii.edu/GG/resources/theses/MS_2006_Gandy.pdf 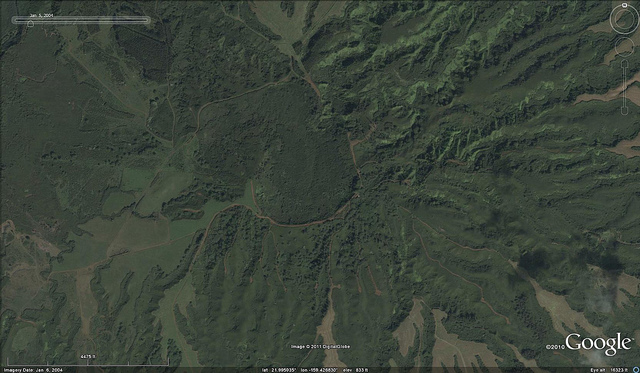 During the entire life of the island, the entire edifice has been subsiding. Drilling as early as the late 1950s found sand dunes some 50 m under the water that could only have been formed above the waves. http://www.soest.hawaii.edu/wessel/courses/gg711/pdf/Detrick+Crough_1978_JGR.pdf

There are some interesting lavas associated with the Koloa. One is a columnar basalt found at Nawiliwili and Kipu in the Lihue Depression, where slowly cooling basalt in dikes opened by either rifting of the flank collapse or intrusion never hit the surface and was exposed to the surface by erosion. The columnar basalt is used in places much the same way as logs are, being used to construct roads and bridges.

Another is the Koloa Volcanics which have been described as having “interesting combinations, and commonly bring up pieces of mantle rock from very deep within them when they erupt.” The quote is attributed to a geologist named Peter Reiners. The problem appears to be a variation in what he refers to as trace elements in the melt incompatible with the temperature of the erupted magma. And this mixture appears to change during the course of a single eruptive sequence indicating some mix of cold and higher temperature mantle melts during the eruption.   http://www.geo.arizona.edu/~reiners/tempcomptrends.pdf

As volcanic activity has ceased on Kauai, the action of waves, wind, rain and subsidence are in complete control. The island is a tropical paradise. But tropical paradises need to periodically renew themselves or they will end up kilometers below the surface as sea mounts over the course of a few tens of millions of years. Kauai will eventually meet that fate, but not in our lifetime. 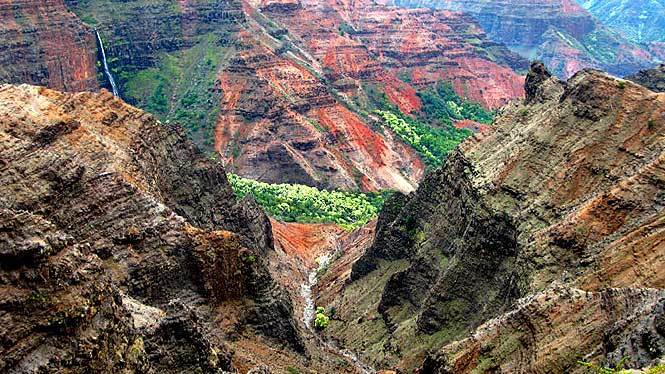 1,174 thoughts on “A Short Geologic History of Kauai, Hawaii”