Okay… what is a ruminarian?   Well, figuratively, we all are.   “Ruminate” is a slang term for standing around, thinking about something.   I adopted/co-opted the word to describe our activities, in part because it’s what we do, and also due to the sheep nature of the blog, following a hapless sheep incident that someone observed on a web cam where one demonstrated it’s lack of aerodynamics during gale force winds.

Before I continue, an apology.  I had intended this post to be a starting point for Carl to elaborate on, but since he is indisposed, I’m fleshing it out for him.

“A cascading failure is a failure in a system of interconnected parts in which the failure of a part can trigger the failure of successive parts. Such a failure may happen in many types of systems, including power transmission, computer networking, finance, human bodily systems, and bridges.”

You can see this quite often at construction sites where they have piled up and stored fill dirt for use in doing the building.   As loads of dirt are removed from the edge, the top of the pile develops cracks where the unsupported mass starts to calve away from the rest of the pile, eventually falling into the vacant area, or gaining support from the material that remains as it leans over and makes contact with it, shifting the mass load over to the new contact area. This is a gravity driven process. In this scenario, the “system” is a pile of dirt. Each cohesive section/block relys upon the next block over to resist the force of gravity and provide support. As each section is removed (or fails), the next section over has to adjust to the increased strain and find equilibrium.

Hawaii is prone to flank collapses of its islands.   Hilina Pali is probably the most recent example. It is the scarp-wall of the Hilina slump, a 19,800 km3 chunk of the south slope of Kīlauea volcano.   A section of the underwater shelf has formed a “bench” and is acting to anchor the foot of the slide and slow it’s progress to about 10 cm/yr. In 1975, a Mag 7.2 quake showed a 3.7 meter drop of the block as it suddenly slid 7.9 meters towards the ocean.

In recent comments, Ian F and DeepThought have both posted graphics that seem to illustrate calving along the rim of Bardabunga. Both lines of evidence are from the plots of quakes there. I mentioned to Ian F that the focal mechanism of the quakes should match the geometry of the failure plane if it were to support the idea. Ian F did a check of the mechanisms from EMSC and they do seem to match, with the strike angles fitting a tangent to the positions along the ring-fault. Since these quakes would be normal mode faults if they signify the two sides moving apart, each Mag 5.0 quake would indicate a motion of about 3 to 5 cm separation along the fault face. (0.5 to 1.1 cm for Mag 4.0s). 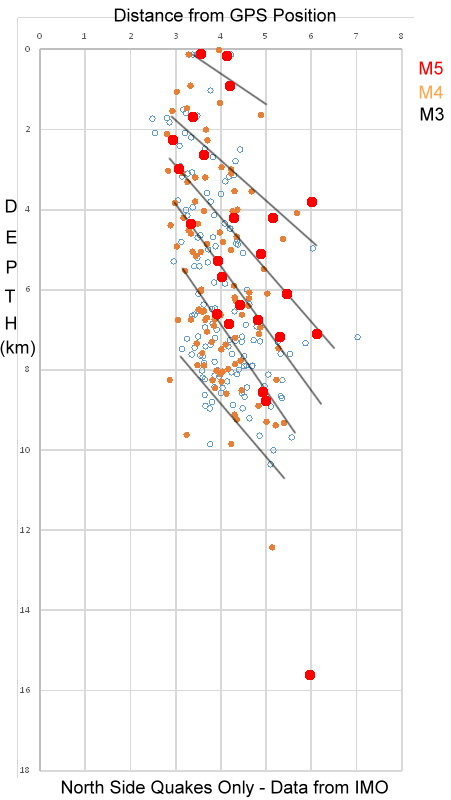 Ideally, the dip angles should match the geometry, but as of right now,   Scratch that, I found time.

The really cool part about this is that BOTH IanF and Deepthought independently saw fault structures in their peeking at the data.  I took a look at both plots and did some note taking.  Of the six faults that BOTH of them noted, IanF’s dip angle is 32.52° to 49.40° (95% conf), and DeepThought’s angles are 32.55° to 47.17° (95% conf).  Looking at the actual average dip angles from EMSC’s listing of GFZ provided quake solutions in the vicinity of Bardabunga, the value is 46.3°.

I think they may have hit upon something.  If the values are correct, it appears that each slab is well in excess of 13262417.92 metric tonnes for each meter of radius around the rim.  Think about that whenever you see a large magnitude quake pop up on the listing.  As the inner sections shift, the outer sections loose a bit more support and are able to slowly shift down in the slow collapse of the caldera wall.  Where it will get dicey is if one of those fault planes allow water to seep down to the magma.  Then it’s anybody’s guess as to what will happen.

Now, to give you an idea of just how freeking remarkable it is that both Deepthought and IanF saw the fault structure in the quake data:  Inflection points are usually a really good indicator that some controlling phenomena is at work on a physical process and that at that point, something causes a state change.  Plotting out the dip angle verses depth derived from the two independent plots, shows something changes at about 7 to 7.5 km depth.  The depth value is the halfway point on each perceived fault face. 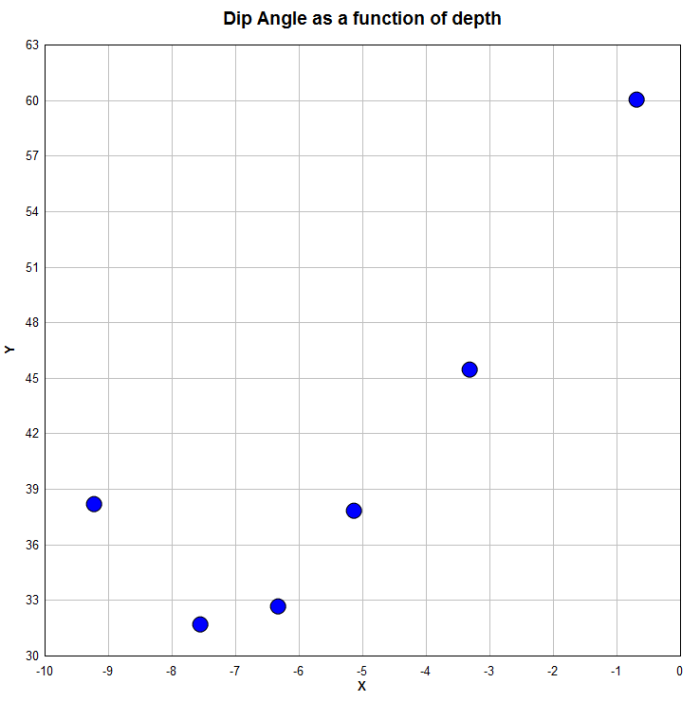 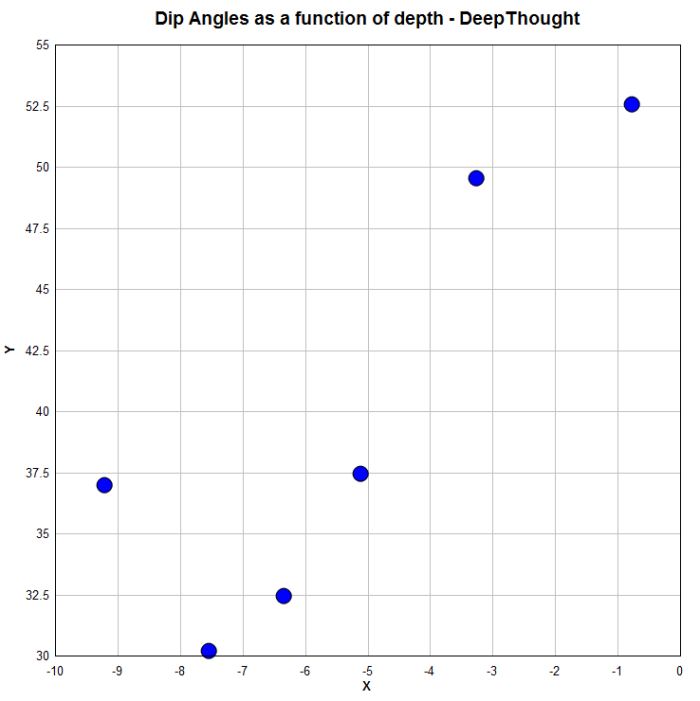 Whats it mean?  Beats me.  That’s what we sit here and think about.  If you wish to get into the more technical side of it, this may help.  Tension and Compression in Bars

Now… to make a bit of use of the data.   The ring faults are composed of six fault planes separating individual contiguous blocks.  Fault 1 separates the first slab from the surface.  The bottom of this slab is fault 2.  that chunk, if you count just the northeastern quadrant, has a mass of about 52,548,131 metric tonnes.  I used an inner and outter boundary of 2.88 km and 6.54 km, the extents apparent from IanF’s plot.  That first slab is about 2.62 km thick.  Slab 2, underlying Slab 1, is about 1.8 km thick and clocks in at about 36,162,125 tonnes mass. Slab 3 – 1.20 km thick and 24,013,900 tonnes. Slab 4 – 1.23 km and 24,578,944 tonnes. Slab 5 – 1.67 km and 33,336,995 tonnes.  Slab 5 is also the closest to the magma chamber, and is holding up the rest of the stack of blocks. (as far as I can tell).  It should be the one directly feeling the effects of a draining chamber.  From the geometry, is appears as if they fit together like a set of books that have been pushed over on their side, with each book resting on the ones underneath it.  Again, how it plays out or works together, that’s for you guys to discuss.  All I can do is point out what was seen in the quake data by IanF and Deepthought.

To get an idea of the energy accumulation of the quakes in the area, KarenZ provides this plot. 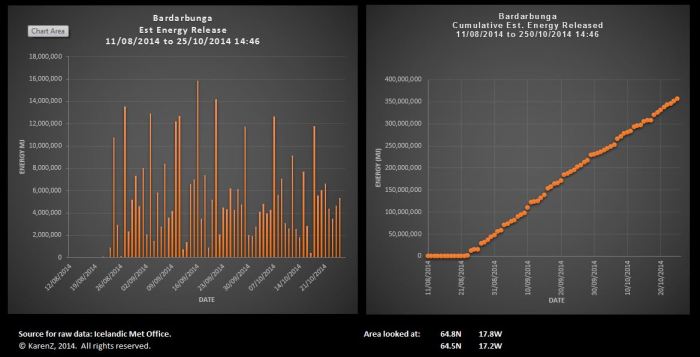 Meanwhile, out at the fissure eruption, avalonlightphotoart provides us with a match of Landsat image of 24 Oct and IMO map 7 Oct. 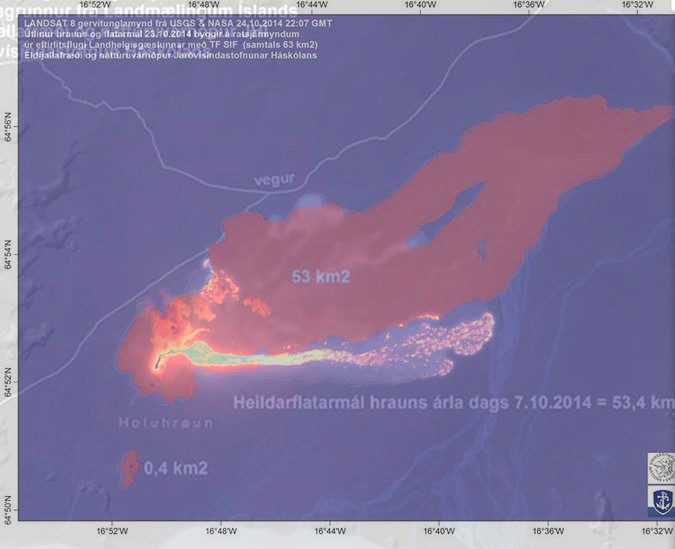 As some of you know, I have this thing for volcanic gases.  Though Holuhraun is far smaller than the 1783 Lakiskagar event, volcanic gases are still something that should be paid attention to.  User scotsfjohn found a nice couple of info graphics about the gas hazards. 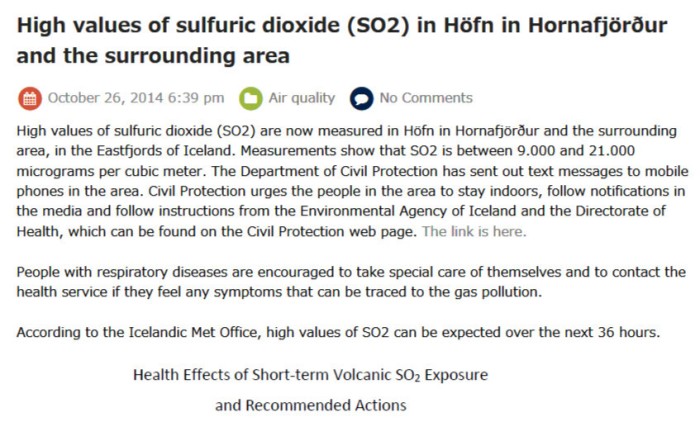 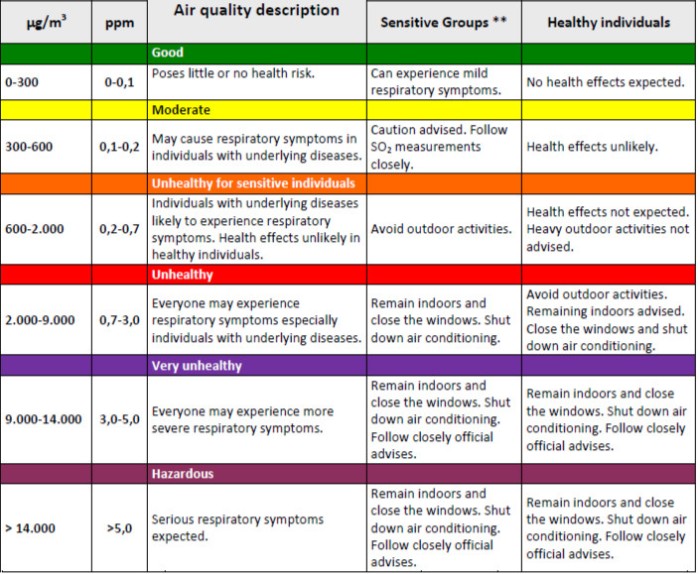