Recently, I ran across a fascinating document about the potential damages from a New Madrid quake and had planned on doing an article about quakes… but since this is a Volcano oriented blog, I was quite pleased when Albert offered up this  piece on one of the more catastrophic eruptions in modern history.   I still remember spending hours reading about this eruption in the local library when I was much younger.  This is still the textbook example of “having a bad day.”

It is one of the most famous volcanic eruptions in history. The loudest explosions ever recorded, dust spreading worldwide affecting sunsets for years, and it occured in a densely populated region, with many passing ships with captains adept at making scientific observations. It wreaked devastation. In spite of this, it was not a particularly large eruption. As a VE6, there were larger ones in the 19th century, and in the 20th century Pinatubo was possibly larger. But Krakatau is more famous than any of these eruptions.

The uninhabited island of Krakatau is (or rather, was) located in the Sunda Straits, between the large islands of Java and Sumatra. Even in 1883 this was a busy shipping lane, and the onset of the eruption was well observed. But the island was not seen as a threat. Apart a fairly minor volcanic eruption in the 17th century, there was little sign of active volcanism. The location is interesting, between the major island of Java and Sumatra. The main volcanoes in Indonesia lie along a line traced by these islands. Krakatau is at the place where this line makes a sharp bend.

Krakatau island was roughly 15 km2 in size, and had three, comparatively small, volcanoes. The tallest one was Rataka, on the southern end. The two lower cones were Danan and Perwoebatan. The word ‘Rakata’ means ‘crab’ in the old Javanese language, and this became ‘Krakatau’ in Dutch or Krakatao’ in Portugese (in English ‘Krakatoa is often used). This name became attached to the entire island. Two other islands, Verlaten island (‘deserted island’) and Long Island formed an arc, with Danan at the centre. Rataka also fell on this arc.

The arc around Danan was the remnant of a crater or caldera, 14km across, with Danan the central volcano. A large eruption would have been needed to form such a caldera. There are ancient stories about a massive eruption around AD 416 causing the opening of the Sunda straits but these seem mythological. A large eruption has been suggested to have occured in AD 535, to explain the decadal cooling at this time, but again there is a lack of evidence. Ash deposits in the Sunda straits indicate that no eruption larger than the 1883 one has taken place for many thousands of years. The caldera shows that a large event happened at some time, but it has not been in historical times. 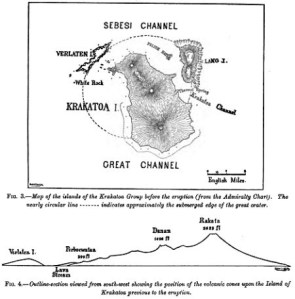 Smaller eruptions did happen on Krakatau. An eruption took place from May 1680 to November 1681, probably from Perwoebatan, although one report states that activity occured at four different locations on the island. The eruption destroyed the forest on Krakatau. However, the eruption was not a large one. Afterwards the island remained quiet for 200 years. The forest regrew and became almost impenetrable. One landing party reported a hot spring, a reminder of the fire below. A lack of fresh water meant that, although people visited and occasionally settled, it did not become permanently inhabited. By 1880, no-one lived there.

In 1880, Krakatau came back to life. Frequent and strong earthquakes began to occur, one of which severely damaged a light house on Java. The first eruption occured on Sunday, May 20, 1883. Explosions were heard in Jakarta (named Batavia at the time), 150 kilometers away. Ash began to fall the next day, as far away as 500 kilometers. Over the next few days, ships in the area reported a column of ash, 11km high. The eruption continued, but not as violent as the inital eruption. On May 27th a landing noted that the explosive activity came from a 50-meter wide cavity within Perwoebatan, located within a 1km crater. Older lava flows suggested this was the same location as the 1680-81 eruption. A photograph of the eruption was taken, coloured in by an eye witness. This is the most famous picture of Krakatau.

The eruption weakened over the next month, but on June 24th a second column was seen to rise from the centre of the island. By this time the summit of Perwoebatan had disappeared, presumed destroyed in the explosions. The two ash columns existed throughout July but the activity was not seen as exceptional — for Indonesia!

A landing party on Aug 11 found that large columns were now rising from three separate locations: Perwoebatan, Danan, and a site north of Danan, near the base of the cone. Lesser activity was seen at no fewer than 11 locations, all from the northern half of the original island, some only meters above sea level. This is the last detailed report prior to the great explosions. Over the next days ash fall was seen up to 80 kilometers away, with reports of loud explosions: the eruption probably intensified during this time.

The critical phase begain on the afternoon of Sunday, Aug 26, leading to a terrible night and morning.

92 thoughts on “The great eruption of Krakatau”