How rifting occurs in Iceland:

Iceland sits in both in the rifting area between two tectonic plates.
The North American and European drift apart in opposite directions. One towards east-southeast, the other towards west-northwest.
However the rifting is not homogeneous. It occurs differently in different sections of the rift area.

Please have a look at the following picture: 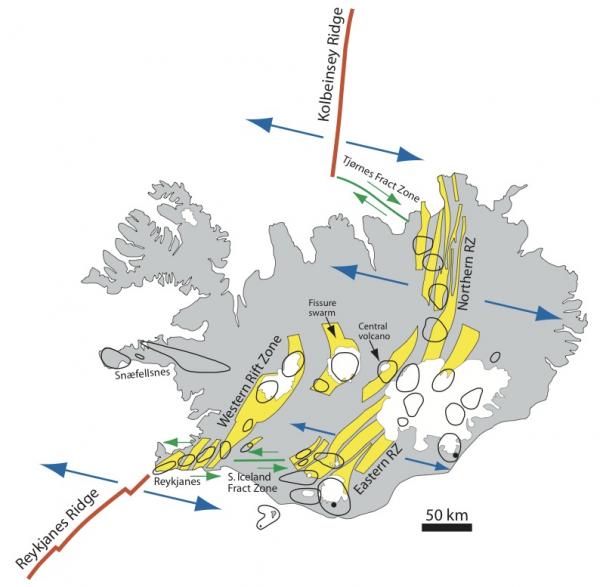 Over the area between Hekla, Katla and Vatnajokull, the rifting occurs almost perfectly at angle perpendicular to the direction of the plate movement. The rifting opens aligning volcanic fissures from the NE to SW, while plates drift towards the NW and SE respectively. This means the earth rips easily open in those regions and this allows for large volumes of magma to erupt. Of course, earthquakes do happen in these regions, and they happen constantly (nearly every day – more than in any other region of Iceland) and therefore they are mostly small sized earthquakes. These are the daily earthquakes at Katla, Vatnajokull and Askja.

However in two sections of Iceland, the southwest seismic zones, and in the north, in Tjornes seismic zone, the plates move apart each other in a almost sideway motion. This creates notorious strain in the rocks, and creates much larger earthquakes. These are called transform seismic zones; regions where motion is sideways.

Daily, they are only very tiny earthquakes, but occasionally, every few decades, strain accumulates and then these areas experience large 6.5 earthquakes. Once they come, they occur in clusters, with every few years a larger earthquake (just like the south Iceland earthquakes of 2000 and 2008), and then reverting to calm decades again.

Moreover, these two regions, experience mostly their plate movement through large earthquakes and do not allow much for volcanic eruptions. Yes, they do occur, but more rarely and smaller. Volcanic eruptions have known to occur in Tjornes and SISZ, but last one in the SISZ was 3000 years ago, in the Grimsnes volcanic system, and it was very small.

It has been confirmed that every major tectonic episode is joined by magmatic intrusions at deep, but rarely they come near the surface. To understand why, just imagine the two plates drifting side by side; this does not create much fracture space in the rocks to allow magma to move upwards, magma would move easily laterally than upwards. However, in the rifting regions near Vatnajokull, like the dead zone, rifting is perfect, and when the crust rips open, large volumes can move upwards!

In other regions of Iceland, rifting occurs at different angles, like Reykjanes, where plates create a rift area about 45º angle from the plate movement. Like results it seems in a “middle ground way” between the two former situations. Eruptions are mostly medium size and occasionally large but rather rare, and strain does accumulate and is released in larger earthquakes, but not as large as the two transform zones of Iceland (mostly up to 5.5).

Furthermore, it seems that rifting activity in the north has been occurring in recent decades. In 1975 Krafla began several episodes of fissure rifting eruptions. This lasted until 1984. Also further north, in Tjornes, there was a large and damaging earthquake (almost up to M7) in 1976. Probably this was a consequence of the rifting process extending further north. So, now it is mostly natural that we are experience another series of major rifting episodes, mostly tectonic, even further north.

Recently, also another volcano has shown signs of uplift and more earthquakes, the Theistareykjarbunga volcano. While still unlikely to erupt, this shows how activity in the rifting regions seems to propagate further north or south over the decades, as strain is released and triggers other nearby regions.

I could almost say that the whole of this could have started back in 1874, when there was a very large rifting episode in Askja, which extended further northwards, and culminated in an eruption very large in 1875.

In Tjornes, there is still the potential for a large earthquake, up to 6.8.

Likewise, we have been experiencing what seems in recent decades an increase of rifting activity in south Iceland. Hekla has been erupting regularly, the Westman islands erupted in recent decades, and Eyjafjallajokull also, as well as two large earthquakes in the south seismic zone. It is natural to expect further movements in neighboring seismic fractures and volcanoes in south Iceland. 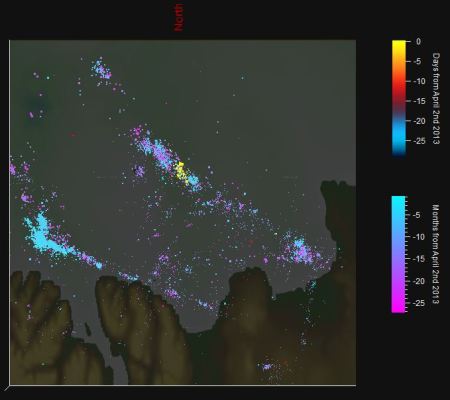 The red dots represent (from North to South) Kolbeinsey Ridge, TFZ and Theistareykjarbunga. The current swarm is nicely blending in previous swarms from the past years. They are all very much contorted.

The data are from http://hraun.vedur.is/ja/viku/2013/vika_14/listi and apparently only the earthquakes at 99% find entry there. That´s why herehttp://en.vedur.is/earthquakes-and-volcanism/earthquakes/tjornes-small/#view=map they seem to be distributed widely, all qualities are included, when revised they will become more “concentrated” I guess.

This was to been seen on http://en.vedur.is/earthquakes-and-volcanism/earthquakes/tjornes-small/ this evening.

Chryphia: This 3D video shows the recent swarm in the Tjörnes Fracture zone, but only 99% earthquakes until 7:07 this morning. In the close-up view you can see how twisted (the angle Irpsit was talking about?) the fault zone is and that commonly the swarms happen along a narrow streak.

One thought on “How rifting occurs in Iceland. Explanations regarding the recent earthquake swarm.”