Attention to active volcanoes tends to go down the longer they are active. The only time you hear something about Kilauea for example is when something like a lava lake drains, new lava fountains show up or when a piece of property is destroyed by the ever-present lava flows, which are in itself one of the most exciting things a volcanophile can see. No change means no news, even though the non-changing phenomenon is highly interesting in itself. The same goes for Tolbachik by now. 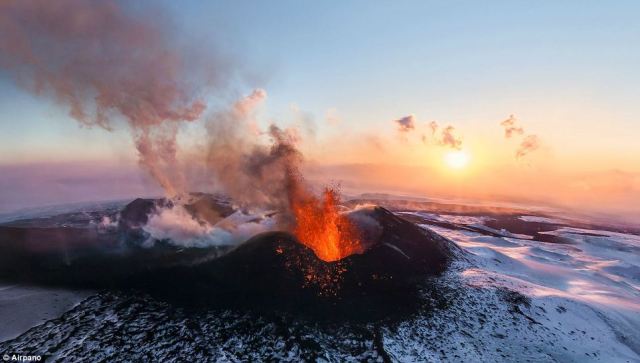 Great photograph of the eruption by Airpano.

KVERT reports no significant change in activity at Tolbachik recently, which means volcanic tremor is still high and very fluid basaltic lava is still erupting in Kilauea-style lava flows. But, it has been like this for a while now.

Ever since the 27th of November, 2012, Tolbachik has been erupting, which is 101 days today. Lava flows have reached as far as 20 km away from the southern/southwestern flank of Tolbachik (Tolbachinsky Dol), so the question is how long this somewhat unusual basaltic volcano located on the Kamchatka peninsula can keep this activity going. And by unusual I mean: having characteristics of a basaltic shield volcano in a subduction zone environment, like the Alaskan Westdahl volcano and the Nicaraguan Masaya volcano. 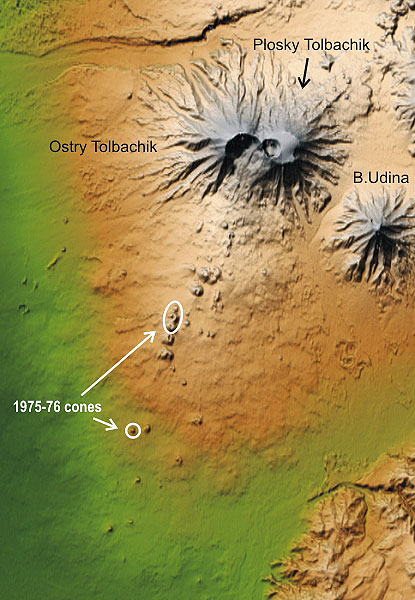 The so-called great eruption of 1975 had a erupted lava volume of 1.2 km3 over the course of some 530 days in total, also on the southwest flank. Lava erupted along a 28 km long fissure, reminding of the rift zones found on volcanoes on Hawaii and the Canary Islands. Activity started at the summit, moving down by creating the northern cones along the fissure a few days later. After some 72 days, a subsidence caldera was formed at the summit crater and activity ended in the northern cones after which the southern cone formed many kilometers south of the northern cones. The southern cone produced low-viscosity basalt for the remainder of the eruption.

Scoria and volcanic bombs from a 1975 cinder cone in the background. Photo by Oleg Volynets (Institute of Volcanology, Petropavlovsk)

Activity before 1975 was occurring very frequently at the central vent of the stratovolcano-part of the volcanic complex. About every year or so, explosive eruptions were reported at the central vent, from around 1955 to 1975 until the big eruption occured, after which this type of behavior abruptly ended. The previous comparable eruption happened in 1940, where a small amount of lava was erupted at the southwest flank. Of special interest is a series of eruptions around 1000 years ago and also 1500 years ago, each time producing comparable amounts of lava to the 1975 eruption from the same SW flank, spaced roughly 50 years apart. Apparently  this volcano can alternate between periods of repeated eruption patterns that are quite different from each other, separated by longer periods of relative inactivity.

The current activity has started on the southern flank, north of the 1975 northern cones, along the same fissure/rift of the 1975 eruption. Several new cones were constructed in the first few weeks of the eruption and the very fluid lava has been flowing constantly ever since. Looking at the past, it will not be surprising to see this eruption lasting for quite a while longer, and possibly changing location of the eruptive center along the ‘rift’zone. However, it is impossible to know what will happen the next months, given that some estimates in late December were already up to 1 km3 of eruptive material. In short, we should continue to keep an eye on it.

Last but not least, a great video (in French, but the images speak for themselves) pointed to by Bruce Stout

No 1 – Its name commemorates the exploits of  two intrepid 17th century ghost hunters. They were priests. SOLVED
No 2 – 3rd most N of the DV 16. SOLVED
No 3 – Local public disorder and an official resignation followed the IDS’s £10m post eruption assistance offer. It was British aid. SOLVED
No 4 – In 1984 it was little wonder that the heroes asked where are we now? SOLVED

137 thoughts on “Tolbachik still not giving up”