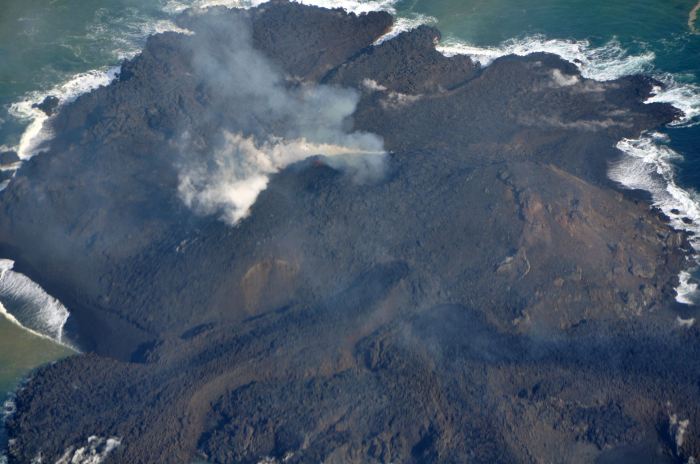 The actively erupting Nijima on the Nishinoshima Seamount. Thank you Sherine for finding this image.

The little Island of Nijima next to Nishinoshima Island on the Nishinoshima Seamount is steadily growing and is now around 400 by 250 meters. Previously the main growth have been away from the island of Nishinoshima so it looked kind of dubious that the islands would merge during this eruption.

Now there is though a lobe growing towards Nishinoshima, and if lava continues to run in that direction the islands should unify fairly fast. One should remember that the depth is least in the area between the Islands so any growth there would be faster than in any other direction. We will though quite simply have to wait and see if Nijima and Nishinoshima joins.

Image showing Nishinoshima to the upper left and Nijima at the lower right. Distance between the islands are between 250 and 300 meters. Image from the Japanese Coast Guard.

One thing is though clear, it does not seem like the eruption will end soon. Judging from the previous island forming eruption on the Nishinoshima Seamount and a few quite likely eruptions, the general length for eruptions here seem to months, if not years. So, we will probably have time to get back to Nishinoshima as time goes by.

Etnas paroxysm no 20 as dawn breaks.

The awaited paroxysm number 20 this year started unusually slow and built up into a rather weak paroxysm and as the tremor started its rapid drop off most said that it was a rather unsatisfactory event. 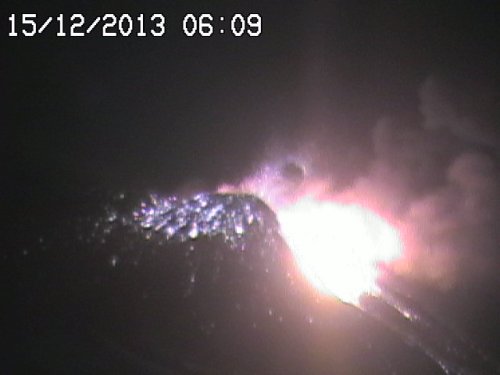 Etna exactly when the side vent opens up and the lava gushes out.

I think that statement was quite unfair since the end phase before the tremor dropped off was a fissure opening up on the side of the New South East Crater cone effectively emptying out the accumulated lava in a pretty spectacular show.

Something was though apparently not normal with this paroxysm compared to the earlier paroxysms. First of all it was not that explosive, and the fire fountaining was not as impressive as we are used to. But what really sets this one apart is that the common rapid decline after the peak halted midway and just stayed there. With time we have had several new peaks where lava has burst forth creating picturesque lava streams covering the side of the mountain.

This lava has mainly been flowing out of two vents that formed as the fissure on the side of NSEC opened up at the peak of the beginning of the paroxysm. At the same time ash and steam continued to be emitted from the NSEC with intermittent strombolian outbursts. The event has also been accompanied with loud bangs that has disturbed the residents close to Etna quite a bit.

As I am writing this the effusive and long-lasting paroxysm is entering its third day if we count from the start of the tremor rise. Trying to guess when the paroxysm will end seems to be a fairly futile exercise since Etna is really into one of her surprise moods.

151 thoughts on “Eruption updates on Nishinoshima and Etna”