The the peaks of Cerro Negro de Mayasquer (not Cerro Negro, Nicaragua) and Chiles are black and white twins in a volcanic complex on the border of Colombia and Ecuador in the Municipality of Cumbal south of the Department of Nariño.

Cerro Negro is a stratovolcano with a 1.8 km crater opening to the west. Andesitic and dacitic lava flows are of possible Holocene age and solfataras found on the shore of a small crater lake are signs of it´s recent volcanic activity. 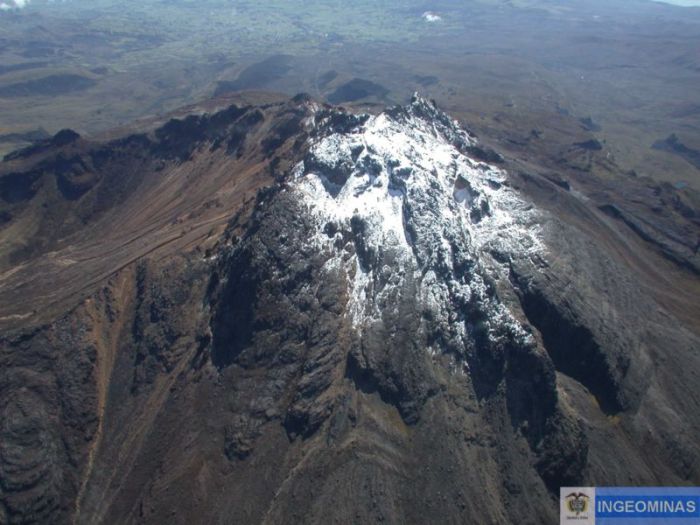 The higher, glacier-covered summit of the Pleistocene Chiles stratovolcano lies only 3 km to the SE. Chiles last erupted about 160,000 years ago, but has hot springs and an active hydrothermal system at its eastern flank, which are guarded by the indigenous communities. It raises their concerns that they will soon have to share this resource with a binationally planned geothermal power plant, which will start to operate as soon as 2018. A 1936 eruption reported by the Colombian government agency Ingeominas may have been from the Ecuadorean volcano Reventador. Mountaineers can climb up Chiles´ challenging 4,723 meter high rocky slopes.

The twin volcanoes are driven by the rising magma from the subducting Nazca plate, the earthquakes in this tectonic setting can for example be viewed in the IRIS 3D viewer. They previously acted dominantly effusive with evidence of highly explosive stages and the open craters give room for thought. About 151,000 people live within 30 km diameter. Until recently the volcanic complex was considered as active in a state of sleep, but then the ongoing earthquake swarm which started in July 2013 raised the alarm bells. The seismicity ocurred in relatively shallow depths from 1 to 17 km reaching magnitudes up to 4.5 on the Richter scale and a number of these events were felt by residents.

Seismicity in March 2014. 11091 volcano-tectonic earthquakes were recorded. Image by SGC

In the weekly boletin from 13 May in one week alone 8800 volcano-tectonic earthquakes associated with rock fracturing were recorded and the alert level remained yellow.

Daily volcano-tectonic earthquake count from Nov 2013 to May 2014 in the Chiles and Cerro Negro region. Image from SGC.

The focal mechanism in general represents an oblique-reverse mechanism related to movement of one of the faults that cross the area and the near volcanoes.

To enhance monitoring coverage, members of the Instituto Geofísico Escuela Politecnica National (IGEPN) from Ecuador recently installed an additional broadband seismometer (CHI_2) and a continuous GPS on May 07-09 during a field trip to Chiles, complementing the three other stations by the Observatorio Pasto (OVSP). They also took time to inform locals about their work and possible eruption scenarios. Meanwhile “green alarm for hospitals” had been declared, meaning a contingency plan for South Nariño will be worked out by La Red de Urgencias y Emergencias del IDSN, meaning the situation is being taken very seriously.

In case of an eruption check out:

SO2 monitoring of Colombia and Ecuador: http://satepsanone.nesdis.noaa.gov/pub/OMI/OMISO2/ecuador.html