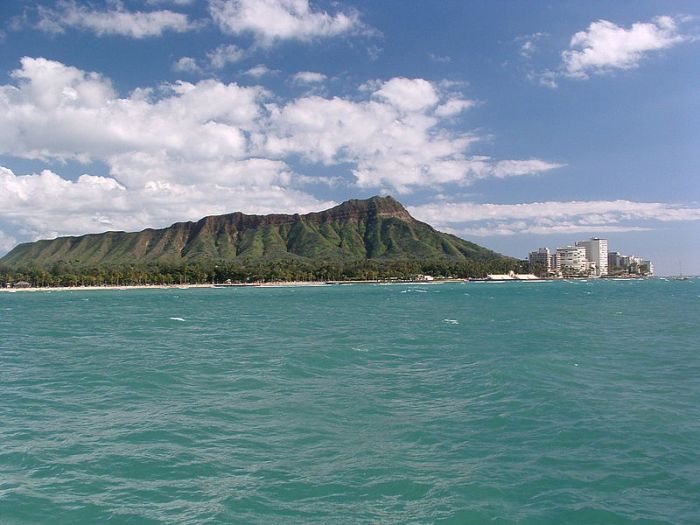 When anyone mentions the volcanoes of Hawaii, most of us immediately think Kilauea and/or Mauna Loa, both located on the big island of Hawaii.  Kilauea is the youngest and best known, because it has been in constant eruption since 1983.  Mauna Loa is earth’s largest volcano and last erupted in 1984.  It is more than 4 km above sea level and takes up more than half of the island. The 1984 eruption was short, compared to Kilauea, lasting from March 25 – April 15.

But, during a recent search of Friday riddles, I found myself on the island of Oahu.  It is known as the “gathering place” and tourists gather at the rate of 4.5 million a year.  Most notably, they come to Honolulu to see the sites, surf, golf, experience a luau and hula dancing and swim and sun bathe at Waikiki Beach with its 5-star hotels and views of Diamond Head.  Diamond Head?  Ever wonder how this dormant volcano got its name and how it got to be there?  Let us go back to the beginning.

Approximately 3.9 million years ago, the currently named Wai’anae Range created the island of Oʻahu. It is the eroded remains of an ancient shield volcano that comprises the western half of the island.  The original caldera, 3 miles (5 km) wide and 5 miles (8 km) long, was at the head of Lualualei Valley but was buried through submergence and erosion.   The Waianae Volcanic Series is divided into lower, middle, and upper members. The lower member is made up of the lava flows and pyroclastics that built the main mass of the Wai’anae shield.  The middle member is mainly rocks that accumulated in the caldera, gradually filling it.  The upper member is a thin cap that has covered much of the shield late in its history. The volcano is now extensively eroded, bearing large amphitheater valleys on its western slopes. These valleys are some of the largest in Hawaii, and they are believed to represent the sources for large landslides now seen on the sea floor to the west of the island.  Lavas of Wai’anae volcano span compositions ranging from tholeiitic and alkalic basalt through to evolved compositions such as icelandite, rhyodacite, hawaiite, and mugearite.  Its crest is the highest peak on Oʻahu at 4,025 feet 1,227 m). The volcano is thought to have last erupted about 2.5 million years ago, about the time Ko’olau volcano started its eruptive activity, and is now considered extinct. 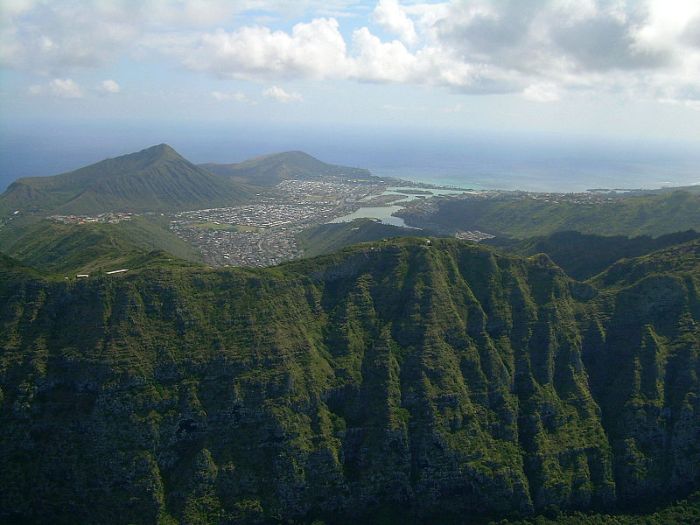 Koʻolau Volcano is thought to have first erupted on the ocean floor more than 2.5 million years ago. It eventually reached sea level and continued to grow in elevation (perhaps 3,000 meters (9,800 feet) until about 1.7 million years ago, when the volcano became dormant.  The volcano stayed dormant for hundreds of thousands of years in which time erosion caused the entire mass to subside considerably.  At some point, however, Ko’olau began to erupt again.  Some 30 eruptions over the past 500,000 years (the Honolulu Volcanic  Series) created such landmarks as Diamond Head, Hanauma Bay, Koko Head, Punchbowl Crater, Mount Tantalus and Aliapa’aki Crater.  Geologists do not always agree on the dates of these more recent eruptions, some dating them to around 32,000 years ago, others to as recently as 10,000 years ago. Geologists believe that there is at least a remote possibility that Koʻolau volcano will erupt again.  What remains of Koʻolau is the western half of the original volcano that was destroyed in prehistoric times when the entire eastern half—including much of the summit caldera—slid cataclysmically into the Pacific Ocean. Whether this giant landslide had any bearing on its rejuvenation, is open to debate.  Remains of this ancient volcano lie as massive fragments strewn nearly 100 miles (160 km) over the ocean floor to the northeast of Oʻahu. What remains is known as the Ko’olau Range with the tallest peak at only 945 meters (3,100 feet).  Several phreatomagmatic craters are clearly visible from the air.  Unlike other Hawaiian volcanoes, no evidence has been found that Ko’olau ever went through a post-shield alkalic stage.  There is some speculation, however, that this missing stage went into the ocean at the time of the giant landslide scarp.

The map below clearly shows the prominent line of vents built up after erosion had carved deep valleys into this southeastern end of the Ko’olau volcano. The dashed pink lines mark the rims of phreatomagmatic craters, and the two pink dots mark non-phreatomagmatic “dry” vents. The green line is the crest of the Ko’olau mountains, which in this part of the volcano, roughly marks the top of the giant landslide scarp. Hanauma Bay is obvious with its white sand beach, Koko Crater is the tallest cone, and Manana Island marks the northeast end of the rift.

I was going to do a single post with the beginning of Oahu and then a brief summary of the famous volcanic landmarks.  However, the history of Diamond Head is quite extensive and interesting so it warrants a post of its own.  So, at least one more follow-up post on Oahu.

OMG – throw out most of this post with the bath water!  Murphy’s Law at its best when you have already logged in hours researching, reviewing, editing, reviewing again!  Just proves that what we think we know about volcanoes, we don’t.

The following is a condensed version of a press release from the University of Hawaii, dated May 15, 2014:

The University of Hawaii has reported that researchers recently discovered that Oahu actually consists of three major Hawaiian shield volcanoes, not two, as previously thought.

This from the combined efforts of scientists from the Manoa campus, Laboratoire des Sciences du Climat et de L’Environment in France and the Monterey Bay Aquarium Research Institute in California.

It’s been commonly thought that the island of Oahu is made up of the remnants of two volcanoes, Wai’anae and Ko’olau. But extending almost 62 miles WNW from Ka’ena Point is a large region called the submarine Ka’ena Ridge.

It is that region that has now been recognized to represent a precursor volcano to the island of Oahu, and on whose flanks the Wai’anae and Ko’olau Volcanoes later formed.

Prior to the recognition of the Ka’ena volcano, the Wai’anae volcano was assumed to have been exceptionally large and to have formed an unusually large distance from its next oldest neighbor, Kauai. “Both of these assumptions can now be revised: Wai’anae is not as large as previously thought and Ka’ena Volcano formed in the region between Kauai and Wai’anae,” said John Sinton, lead author of the study and Emeritus Professor of Geology and Geophysics at the UHM School of Ocean and Earth Science and Technology.

“What is particularly interesting is that Ka’ena appears to have had an unusually prolonged history as a submarine volcano, only breaching the ocean surface very late in its history,” Sinton said.

Much of our knowledge of Hawaiian volcanoes is based on those that rise high above sea level, and almost all of those formed on the flanks of earlier ones. Ka’ena represents a chance to study a Hawaiian volcano that formed in isolation on the deep ocean floor. 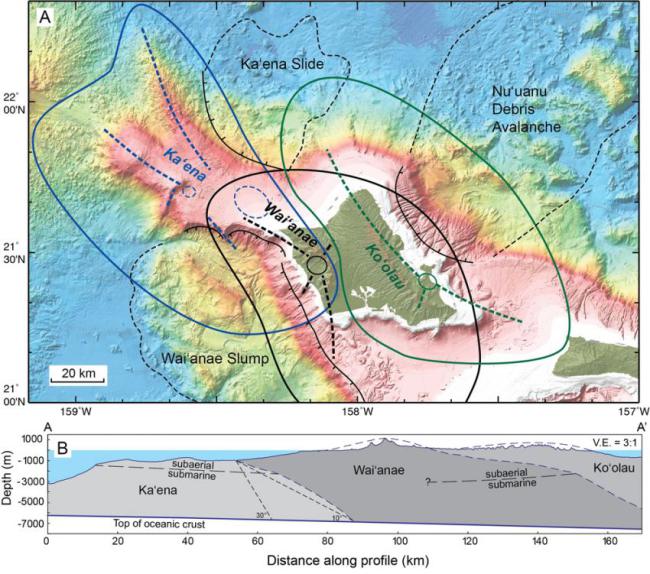 92 thoughts on “The Volcanoes of Oahu, Hawaii”