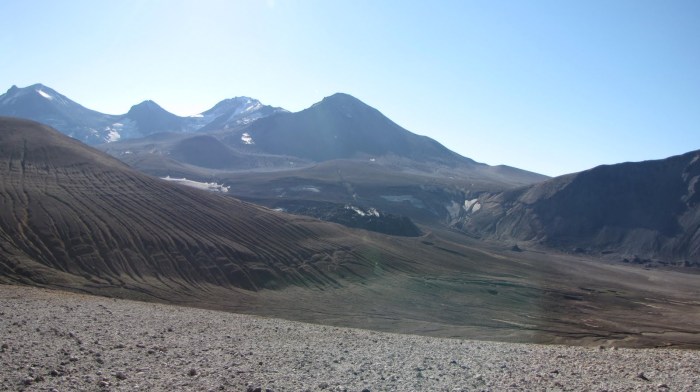 Photograph from Watchingforrocks.com Novarupta main vent in the middle of the image.

Commenter Luisport brought this to my attention. Following close to the centnerian celebration of the Katmai and Novarupta large eruption on the june sixth 1912, the volcanoes in question seem to have a slight case of being hungover.

During the last two days Katmai/Novarupta has been suffering a medium sized swarm of earthquakes ranging from 2 to 3M. The number of earthquakes is not that high, but it is still worthwhile to point it out.

Source: USGS/CVO Alaskan Volcano Observatory. The red dots is the site of the current swarm.

Roughly at the same time as the onset of the earthquake swarm the level of tremor increased sharply for about 14 hours before falling back to back-ground levels.

Katmai/Novarupta is currently coded as a GREEN volcano, as such it is not deemed to be close to an eruption according to USGS/CVO Alaskan Volcano Observatory.

The current increase in activity is interesting, but my guess is that this is not the run up to an eruption. Instead I interpret this as a magmatic emplacement into the volcanic system. Something that could lead to an eruption in the future.

And even if there would be an eruption it would not be on the scale of the 1912 Novarupta eruption due to the magmatic system being severely damaged in the previous eruption. An eruption now would most likely be in the VEI-2 to VEI-3 range. 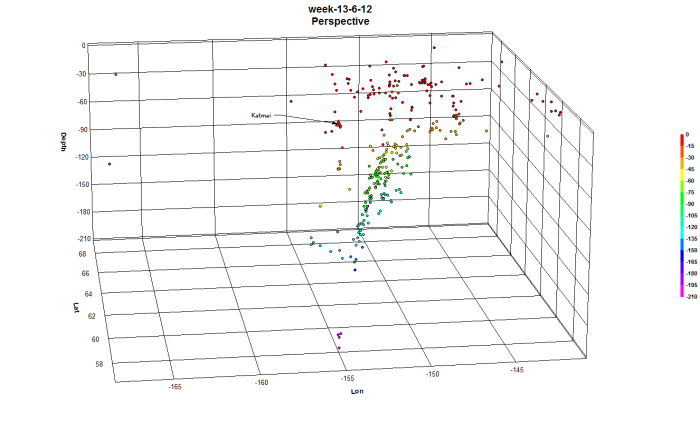 Image by GeoLurking. On this perspective plot one can see a small stack of earthquakes forming below Katmai. It starts at around 30km and goes upwards. The stack is still not highly defined due to the low number of earthquakes. An earthquake stack like this is normaly associated with the “feeder tube” of a volcano as new magma is entering the system. For further plots by GeoLurking look in the comments. For larger view click on the image.

265 thoughts on “Katmai close to a nova rupta?”