The Katmai Volcanic Complex is one of the most complex, interconnected volcanic structures in the US. Within an area of 300 km2, it has five major stratovolcanoes, a caldera, and a dome marking the site of the largest eruption in the 20th Century – the Katmai – Novarupta eruption of 1912. Katmai itself is continuously monitored via an Alaska Volcano Observator (AVO) webcam and webicorder.
https://www.avo.alaska.edu/volcanoes/volcinfo.php?volcname=Katmai

In some ways it is similar to the Kamen, Bezymianny, Tobalchik, Kluchevskya, Ushkovsky complex where at least seven major stratovolcanoes are within a few tens of kilometers of one another and the plumbing system for magma to the various volcanoes is similarly complex.

Dump truck loads of papers have been written about the 1912 eruption, but those focus mostly on the eruption itself. With this piece, I want to describe the larger area that eruption too place in. Consider this yet another introduction. 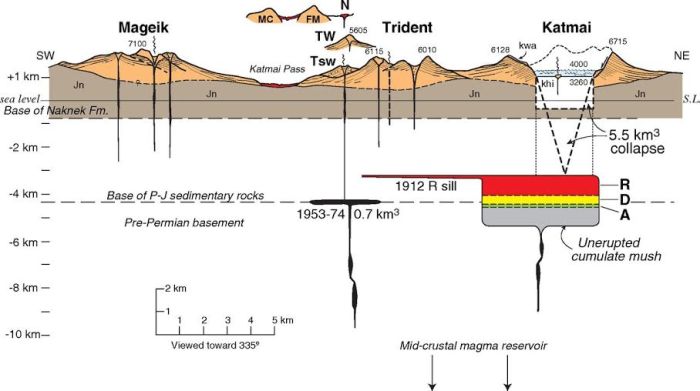 The Katmai Volcanic Complex consists of five large stratovolcanoes – Mageik, Martin, Katmai, Griggs and Trident. They are surrounded by numerous smaller domes and vents. The plumbing for these volcanoes appears to be interconnected in that the 1912 eruption came out of a previously unknown vent called Novarupta, yet the caldera collapse was at Katmai, 10 kilometers away.
http://pubs.usgs.gov/pp/1791/

The current complex is part of a larger line of back arc subduction volcanoes. The oldest being Alagogshak, some 30 km SW of the Katmai Caldera. The line stretches to the NE, including another 40 or so km to the NE ending in Devils Desk. Griggs is the only stratovolcano that sits appreciably off the line of vents, some 10km W of the caldera.

Eruptive magmas include rhyolite, dacite and andesite. There are examples of welded pumices with a mix of two types of magma. There are also significant tephra and pyroclastic flow deposits throughout the region. The magma throughout the system tends to be highly evolved with relatively high levels of crystalline content. Basalt deposits are also part of the eruptive products of this complex.

The area is still active with a cone-building set of eruptions out of Trident between 1953–1974. These eruptions were marked by dome building, significant ash clouds estimated to 10 km. The area was not highly traveled or observed at the time, so the actual number of eruptions and explosions are unknown.

The 2003 USGS Pamphlet entitled “Geologic Map of the Katmai Volcanic Cluster, Katmai National Park,
Alaska” is a 45 page description of the region and places it in context. There is a section on page 14 that describes the clustered stratovolcanoes that I found most interesting. http://pubs.usgs.gov/imap/i2778/

The authors note the tight line of stratovolcanoes along the 4,000 km long arc of the Aleutians, which also includes the 95 km long portion in Katmai. They also noted the relatively smaller, closely spaced dacite – andesitic volcanoes along the Katmai portion of the arc. Along this arc, there are few volcanoes not in the line. Griggs, part of the Katmai Volcanic Complex is one, and its eruptive output is sufficiently different from that of the other Katmai vents that it is thought that its magma source is completely different and likely unevolved. The writers contrast this single file line of volcanoes with other continental volcanic arcs in Japan, the Cascades, Mexico and the Andes, which the distance from the subduction trench varies by tens of kilometers with many volcanoes “scatter far behind the volcanic arc.”

I will take a short tour of the major volcanoes of Katmai. The following paraphrases portions of the USGS 2003 Geologic Map of the Katmai Volcanic Cluster, Katmai National Park, Alaska.
http://pubs.usgs.gov/imap/i2778/

Alagogshak Volcano. Oldest volcano of the group. Sits at the south end of the line. Active from 680,000 to 43,000 years ago. Eruption of an estimated 10 – 18 km3 of dacite – andesite lavas and pyroclastic flows. Evidence of past fumaroles. Glacially covered and eroded.
https://www.avo.alaska.edu/volcanoes/volcinfo.php?volcname=Alagogshak

Mount Mageik. Compound andesite – dacite stratovolcano. One of the two largest edifices in the region. Active from 93,000 years ago to present. Output estimated at 30 km3. At three different debris avalanches identified on its flanks. Surrounded with domes and lava flows. Active glacier coverage.
https://www.avo.alaska.edu/volcanoes/volcinfo.php?volcname=Mageik

Katmai. Only caldera of the system. Caldera formation in 1912 collapsed a pair of cones. Active from around 70,000 years ago to 1912. Total output in the vicinity of 40 km3 dacite – andesite and rhyolites. Lavas and pyroclastic flows identified, as have been tephra falls. 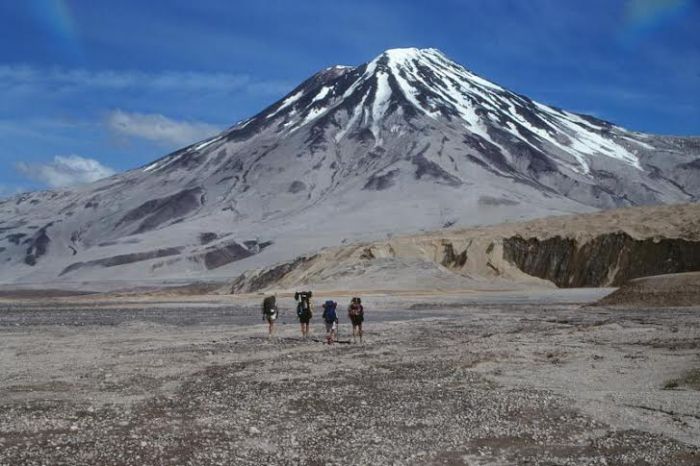 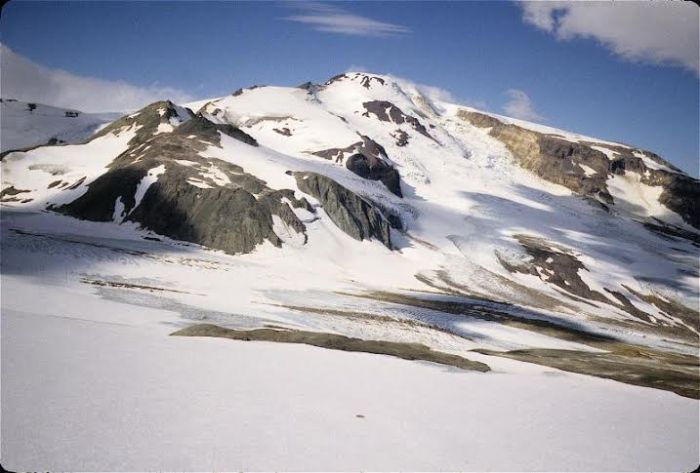 A very busy set of subduction volcanoes that are not finished yet. Continuing fumarole activity indicates that there is still magma below the system, likely highly evolved waiting the next injection of hot new magma. The mountains are being whittled down by glaciers as fast as they are built, a fascinating combination of fire and ice.

The Katmai complex looking west to east, with Naknek Lake in the foreground, Mt. Griggs and the Valley of Ten Thousand Smokes in the Background. Photo courtesy AVO, USGS, Cyrus Read, May 9, 2010, http://www.avo.alaska.edu/images/image.php?id=19771

89 thoughts on “The Katmai Volcanic Complex”