The ice covered volcano basking in the sun prior to the current unrest.

As we started our series about the New Decade Volcano Program we had to do some hard choices about which volcanoes we would include. We opted to not feature Cotopaxi even though it is situated near the Ecuadorian capital of Quito and has a proven track record of very large eruptions.

It could though very well have fit into our list of million death expectancy (MDE) capable volcanoes. It is therefore with a bit of worry I notice that it seems like Cotopaxi is showing signs of an upcoming eruption.

It is stated that Quito is the only capital in the world that is in a direct striking range of a major volcano, which is obviously not true since Guatemala City is even closer to the far larger volcano of Amatitlán. And I am not even going to start about Manila in the Philippines. But, the two active volcanoes surrounding Quito are far more active.

Cotopaxi has 86 eruptions on record with at least 7 of them being VEI-5 eruptions. It should though be noted that smaller eruptions (VEI-3 or less) has not been identified in the older record but that they happened.

For those who do not understand how close Quito is and how accesible from Cotopaxi and image tells more than a thousand words.

The last VEI-4 eruptions occurred in 1744, 1768 and in 1877. The last eruption was particularly intense in producing pyroclastic flows that covered all sides of the volcano.

Cotopaxi is covered in a glacier and is highly prone to producing large scale lahars that travel for a long way. The lahars from the 1877 eruption travelled all the way down to the Pacific Ocean and in the opposite direction into the Amazon Basin. The mountain is covered in steeply eroded canyons created by the numerous lahars that the frequent eruptions have carved out of the mountain.

There is also an added risk formed by the volcano, and that is that ashes is likely to destroy the fresh-water supply and water plants that Quito depends on for its drinking water. Therefore the authorities also have to cope with planning for and trying to mitigate a likely water shortage that might be prolonged if a larger eruption occurs.

If a large lahar or pyroclastic flow would travel down the valley that leads into Quito there is a potential population of 1 800 000 residents. The local authorities know Cotopaxi well and the potential danger that it poses and mitigation and evacuation plans exist. 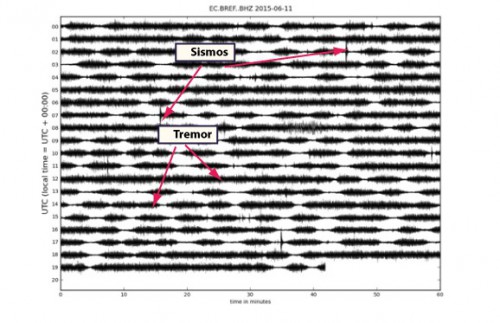 Cotopaxi has been quiescent for an unusually long time and there is no good explanation for this. Currently the repose period is the longest that is likely to have happened in the last 1000 years. The other few gaps are more likely due to scanty records missing smaller eruptions.

The last eruption at Cotopaxi was back in 1940, giving a 75 year long repose period. In 1975 and in 2002 to 2004 there was heightened seismic unrest together with increased degassing. Especially the last period was giving concern about an upcoming eruption from Cotopaxi. In retrospect it is far more likely that these two episodes were intrusions into the magmatic system at 14 and 5 kilometers depth.

In April 2015 seismicity picked up above the base level for the first time since 2004 and 628 local earthquakes was detected, in May more than 3 000 separate seismic events was recorded. In May the first long period seismic signals were recorded, a sure sign that pressure is building within a volcano.

Degassing increases sharply in May from the base level of 500 tons per day of sulphur dioxide up to 3 000 tons per day. This coincides with mountaineers reporting strong sulphuric odor around the crater.

Inflation has been reported on north and north-east sides of the volcanoes with 4 centimeters of uplift. Also tremor and volcano-seismic events relating to fluid movement has been recorded in June.

The current level and type of activity has never previously been recorded at Cotopaxi. Especially the large amount of long period seismic events is troublesome.

The crater of Cotopaxi in high detail. Click for high resolution.

If an eruption occurred today it could be anything from a VEI-2 eruption up to a VEI-5 eruption, there is no discernible pattern to what the size of an upcoming eruption would be. But, since the volcano has had an unusually long repose period and at least two magmatic emplacements since the last eruption it is likely that the eruption would be in the higher spectrum of the possible eruptions with a VEI-4 being the most likely.

A VEI-4 eruption is unlikely to carry enough force to send pyroclastic flows as far as into the suburbs of Quito, but villages closer to the volcano would be likely to be hit.

Lahars can travel in almost any direction from the Volcano, and potentially a lahar from a larger eruption could travel into Quito destroying houses and causing material destruction. It is likely that the population living within lahar risk zones will be evacuated as an eruption starts.

Lack of drinking water is a high risk factor after a larger eruption even though the authorities have good plans for solving this. Additional resources for water purification would be needed after an eruption.

If a VEI-5 eruption would occur there is an increased risk for large scale material destruction in Quito.

Due to the type and prolonged high count of seismic events combined with heightened degassing and inflation I think it is likely that Cotopaxi will erupt. If Cotopaxi erupts it is likely to be within a span from VEI-3 to VEI-4.

The internal activity of the volcano remains at moderate levels. Due to bad weather conditions no direct observations were possible but it is estimated that it continues as on previous days, i.e. with small emissions. We also believe that activity at the surface is low. The volcano while active is not erupting.

Seismicity: This parameter remains at similar levels to the past few days. In the last 24 hours, 36 long period events (LP), 1 volcano-tectonic event (VT) and 95 episodes of tremor (TR) were recorded.

256 thoughts on “Cotopaxi – A most dangerous volcano”