Last night the most stunning images flowed in over Mila cam Bardabunga 1. 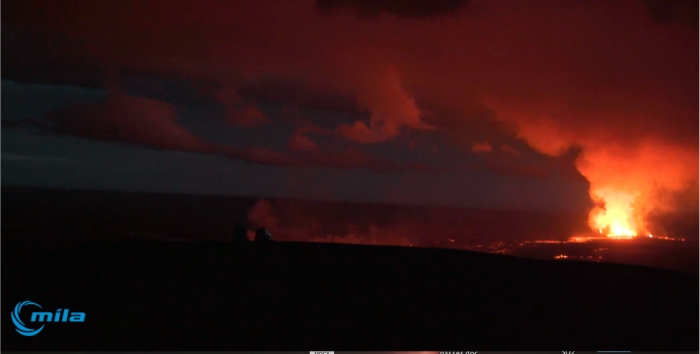 That radar station or as we on VC call it Dalek R2D2 got a visit. We could watch 2 people moving around with flashlights, but sometimes at least one just stood there in awe, watching the scene developing so close to him/her/? . 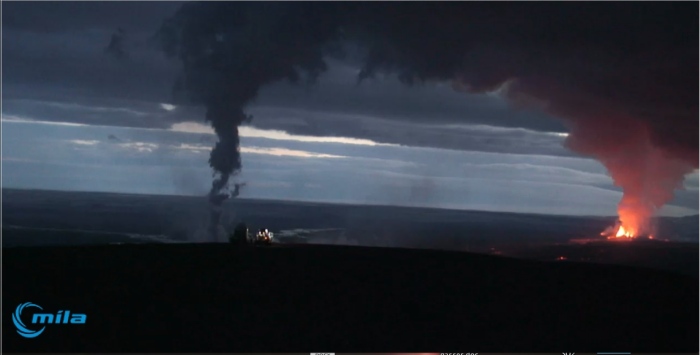 This image was done a when night started setting in. Can you see the column of smoke rising in the background of the dalek? Thats were lava meats the water of the closeby river. Often it is not as distinctive as in the image above and people think some other kind of action might be starting or going on. When the repairs and/or the refueling ( Mike Ross informed us that the Radar is diesel powered and needs to be refueled from time to time) were finally done the jeep left the sight and during this some odd lights could be watched. 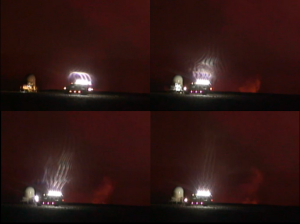 Beam me up Scotty! The Radar station seems to be working again and is blinking either happily or feeling lonely. 😉 The jeep left as the work was done, even though we envy people who are able to go there, keep in mind that this eruption is emitting quite some SO2 clouds and it might not feel as pleasant as it looks, to stand there next to the cam. On the first image on top, you can see that the main vent in the center is very active, but the height cannot be calculated correctly from this picture. The burning red lava reflects in the steam smoke and gas cloud above it. In daylight the vent appears much lower. Some people were also fooled by clouds in the background. This were normal cumulus clouds. Trust me people. I have seen the tremor and the first images of Eyjafjalla and Grimsvotn and Sinabung and of course Etna. IF a bigger eruption starts, you notice immediately. There is no question, is this something or not. You will know with certainty. We have seen a Mag. 5,2 earthquake in the caldera but no new erupt is confirmed. Nor did the tremor graphs change much. Again. You would notice immediately if something big happened. With Grimsvotn, the sharp rise was very visible on all Icelandic stations. You can check for yourself ( hraun links are allowed.)  http://hraun.vedur.is/ja/oroi/allarsort.html. Nothing out of the ordinary ( since the fissure eruption started) to be seen there. The last 2 Updates by IMO:

Earthquake activity is continuing in Bárðarbunga, in the northern part of the dike intrusion and Herðubreiðartögl. Around 30 earthquakes were measured this night. The largest one occured at 01:07 at the northern caldera rim of Bárðarbunga and was of magnitude 5.2 (not manually checked yet; average of USGS and EMSC magnitude estimates, and IMO-alert automatic). Tremor seems similar through the night, eruption continues.

The earthquake activity today continues at the northern part of the dyke intrusion. The largest earthquake  in the dyke since the end of August occurred at 16:27 today with magnitude 4.5. These are the largest earthquakes located today at the caldera rim: kl. 06:15 M 4.8 kl. 07:20 M 4.6 kl. 14:48 M 5.0 kl. 17:53 M 4.3 An earthquake swarm is taking place north of Herðubreið. About 80 earthquakes have been recorded today, all below magnitude 2. Swarms in this area are not uncommon. Due to high concentration of SO2, scientists are leaving the area. 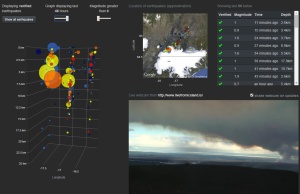 Mike Ross: I’m in Myvatn now, going up to Holuraun later today, for 2-3 days. I will tweet ( @eruptionchaser ) or FB post (tmfdmike) what I can! But I will be working.He might show up on the Milcam later today. And now the eye candy Carl promised earlier: Photographer:  Eggert Norddahl ( VC productions removed on request of Eggert as long as he never got the promised money for his expenses.) 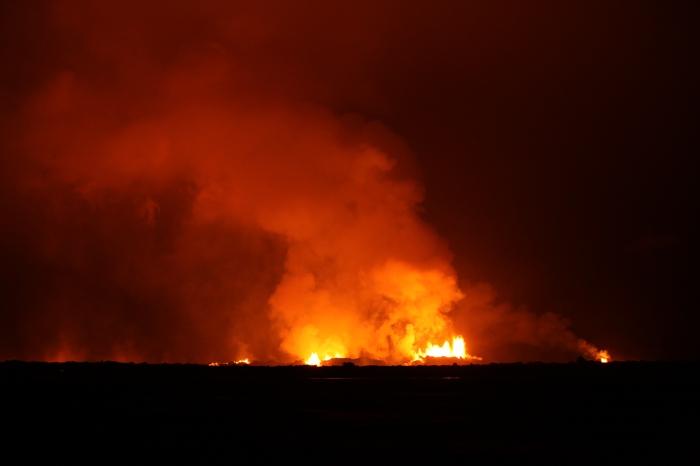 Fire Fountains at Holuhraun by night. Photograph and copyright by Eggert Norddahl. All rights reserved. 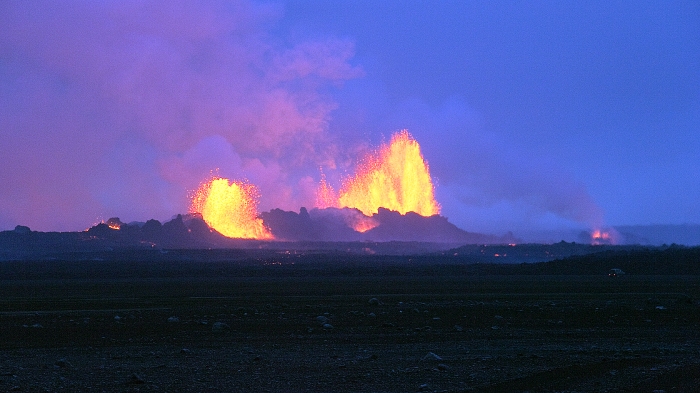 Near the Holuhraun Fire fountains. Photograph and copyright by Eggert Norddahl. All rights reserved.

1,402 thoughts on “Red skies over Holuhraun”